A Leg Up on Fireworks Anxiety in Dogs

The big bang theory is no theory – it’s real and is terrifying for many dogs, and also some cats are among pets fearing fireworks

Even the most patriotic All-American dogs – Boston Terriers or American Foxhounds – have no way to understand what those unpredictable explosions are all about.  And it might even be more than the sounds of the fireworks, if they happen to be nearby the sensitive snouts may smell them and dogs might even be able feel their vibrations, adding to their fear factor. 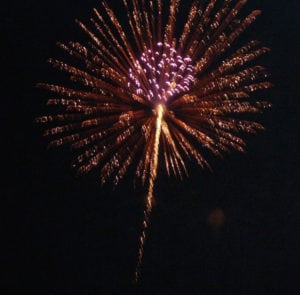 At least we know when the fireworks will occur, beginning a couple of days before July 4, and continuing a few days after.

What you do about it can depend on just how afraid your pet happens to be. Absolutely begin with a consultation with your veterinarian or a veterinary technician with behavioral training.

If your pet’s terror level is high – or one might say in the red zone – shaking, excessively salivating, becoming incontinent and/or not eating and described as “inconsolable”  – the most humane approach may be anti-anxiety medication.

For example, a drug called acepromazine is no longer considered a good idea, as it was years ago, because it doesn’t impact the dog’s seriously heightened high anxiety level, it merely causes drowsiness. Similarly, Benadryl can make dogs sleepy. So, with enough of those drug, the dog snoozes on and off, but the terror remains.

It’s arguably inhumane to force drowsiness in a terrified pet. Imagine, you are frightened because you’re in a room filled spiders. To get over the fear, your doctor gives you a sedative – now you’re trying desperately not to fall asleep, and you remain terrorized.

True anti anxiety medication affects brain chemistry to effectively lessen anxiety. A specific medication that works for one dog may not be as effective for another, and some drugs require time to kick in. It’s best to not wait until July 3 to consult your veterinarian.

For many dogs, drugs may not be required because the anxiety level isn’t quite in the “red zone.”. Instead, behavior modification might do the trick, particularly if you supplement with some products listed below.

Start by desensitizing and counterconditioning your dog to the sounds of fireworks. The idea is to play the sounds of the big bangs very softly as the pup plays or eats, and ever so gradually pump up the volume (and bring play or the food dish closer to the speakers).

Pretty music can be calming

At www.dogsandfireworks.com, you can download a free MP3 of fireworks sounds.  Celebrated dog trainer Victoria Stilwell from Animal Planet’s “It’s Me or the Dog” offers an entire program with firework sounds on her site, $19.98, Also, Stilwell partners with “Though a Dog’s Ear,” $29.98.

For some dogs, what might work is to combine several of the products listed below – and “jollying.” Take your pet to the basement, or the most secluded room in your home. Pump up the music so the dog doesn’t hear the fireworks. You can play classical music, or even specially produced music from A Sound Beginning, or other sites with music to help lessen anxiety of worried dogs.  Also, try to distract your dog or cat with play. Don’t worry, you’re not rewarding your pet’s fear; instead you are readjusting from fearful mode into play mode.

Adaptil: A copy of the natural comforting pheromone released by mother dogs to reassure puppies. Adaptil is available as a plug-in diffuser, or collar to go wherever your dog goes. 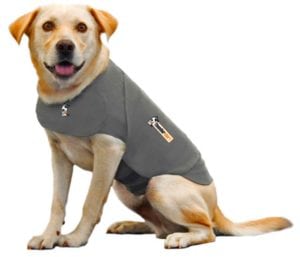 Thundershirt, Storm Defender, Anxiety Wrap: Each of these options provides something for the dog to wear which has a potentially calming affect:

*Zylkene:  A nutritional supplement derived from casein, a protein in milk, and is used to promote relaxation.


*CALM: A Royal Canin prescription diet for cats and smaller dogs; it includes two amino acids that help pets maintain emotional balance. Alpha-casozepine, and L-tryptophan. In addition, the formulas include Nicotinamide, also known as Vitamin B3, which creates a calming effect within the central nervous system.

*Solliquin: A nutritional supplement chewable which stress busters like L-Theanine, Magnolia officinalis and phellodendron amurense – all big words, but safe,  which really can work. 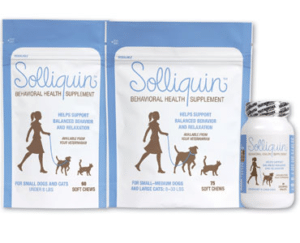 There are a wide variety of other “calming products,” from aromatherapy to other nutritional supplements. Most of these are without much basis in science, but can certainly work for individual pets.

Most important, no open door policies around the Fourth as frantic pets bolt in surprisingly high numbers. Microchip all dogs and cats, and register them with the microchip provider just cases a pet does get out.

And NEVER tie our your dog, tethering your dog outside, while there’s a fireworks display (not a good idea to tie out dogs anyway).