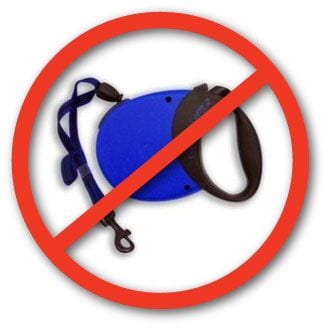 If I had the power to do it, I would ban retractable leashes. Of course, any piece of equipment can be a problem, but I argue there are a myriad of potential issues regarding retractable leashes, which may be downright dangerous for dogs and for the people who walk them.

1: The very concept of giving dogs room to roam can be a problem. Some retractable leashes can extend up to 26 feet. True enough, giving pup some independence. But the dog is so far out ahead, there’s no way to control or sometimes even see what’s happening ahead.

Here’s a real-life example: As I was walking in an urban area a large dog turns the corner, sees our dogs and lunges at them. Only because I reacted quickly was there no dog attack. The person who was walking that dog was over 20-feet behind and couldn’t see what was going on around the corner, so had no clue what was happening, except that I suspect she head barking.

Another real-life example: An elderly woman is walking down the street – minding her own business – holding her grocery bags. A dog coming in the other direction on a retractable leash decided to inspect the woman’s groceries. In effort to keep the dog’s nose out of her groceries, she fell to the ground. This dog meant no harm, and luckily the woman wasn’t hurt. The dog’s caretaker did get to the woman and helped her to her feet – but this never would have occurred if her dog in control of the handler; a retractable leash, by it’s very nature, counteracts that control.

2. Retractable leashes can be training tools. Training dogs to pull ahead of their people, which exactly what you don’t want.

3. If you’re concerned about a person or a dog approaching you, your dog knows it when on a six-foot leash because of the close proximity to you, at most six-feet away, but more likely much closer. Not only can your pup can see you, your pup can presumably “smell” what you’re feeling, perhaps picking up on your pheromones. It’s thought that with six-foot leashes we communicate from one end of the leash to the other. With a retractable leash, this is unlikely to occur.

4. Retractable leashes are thinner than standard leather leashes. If the handler drops the heavy handle and picks up the leash, rope burn can occur. And the thin cord of a retractable leash can break – especially when a powerful dog is on the other end. If a strong, good-sized dog takes off at full speed, the cord can snap. Not only can that put the dog and whatever he may be chasing in danger, but also the cord can snap back and injure the human at the other end.

5. Dogs have suffered serious injuries as a result of the sudden jerk on their neck that occurs when they run out the leash; they may also suffer neck wounds, lacerated tracheas or back injuries.

Again, a real-life example: Already 15 or 20 feet ahead of the handler on a retractable leash, the dog sees a squirrel and runs toward it. The squirrel ran around to the other side of a nearby tree and then scampered up the tree an out of reach. The dog in pursuit, also circled the tree, and the person at the other end just couldn’t keep up and dropped the handle. The dog, apparently thinking the squirrel had crossed the street, ran directly into the street. A bus hit the brakes, narrowly missing the dog who was dragging the retractable leash behind.

7. A simple leather leash can’t malfunction – there’s nothing to malfunction. Retractable leashes can break, not extending, not retracting or unspooling. While this may not be dangerous, it is annoying to have a “broken leash.”

I talk with veterinary behaviorist Dr. Theresa DePorter about leash pulling, and how to deal humanly with the problem using a body harness or head halter.