Adopt Coco from Anti Cruelty and Houston, on WGN Radio 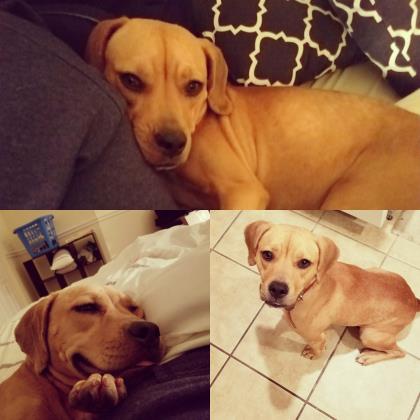 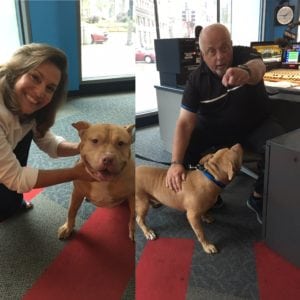 Andrea Darlas and Steve Cochran of WGN radio with Chop, that was last week

Last week Chop was available for adoption via the Anti Cruelty Society, and the plan was for us to go WGN Radio to find a home for him, as we’ve previously adopted maybe 15 or 16 consecutive dogs without fail with the Steve Cochran Show. However, we didn’t get the chance, as President Trump decided to speak from the United Nations, and he spoke for quite a while. We were pre-empted. However, I posted in social media that Chop needed a new home because the landlord decided he didn’t want to allow dogs any longer. And via social media, including a video I posted with Collette Bradley of Anti Cruelty, Chop was adopted!

Cochran agreed to give it another shot this week at 9:05 AM Tuesday, September 26. Coco a 1 -year-old Pit/Hound mix, imported from a Houston area animal shelter following Hurricane Harvey. Like too many dogs from the area, Coco has heartworm disease. She’s currently undergoing treatment and can’t be adopted until she’s given a clean bill of health. However, we’re seeking a foster home. If you have another dog, it’s ok – heartworm isn’t contagious.

Coco is ready for this week’s adoption segment

Coco has quickly been singled out for her smarts, and she’s well behaved. She does require additional training for all her energy, but so far, so good. She loves her toys.

Our goal isn’t so much to find a forever home, but instead a family to foster this sweetie. Of course, you could become a “foster failure,” and wind of keeping Coco forever.  Listen at 720AM or HERE.

Want to celebrate all the good work Anti Cruelty Society is doing? Of course, there’s a cost to treating all these dogs with heartworm. Pints for Pets is October 2 at 6 p.m. CDT at Revolution Brewpub, 2323 N. Milwaukee Ave. Tickets are $40 and include beer, beer, beer, food, and more beer. Register here.