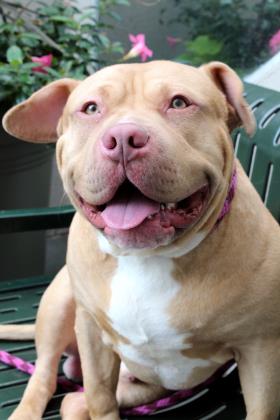 He’s gentle as a lamb, so perhaps it’s appropriate that his name is Chop. This pup, from the Anti Cruelty Society, is available for adoption tomorrow (September 19) on the Steve Cochran Show at 9:05 a.m. CDT on WGN Radio in our monthly dog adoption segment. Listen at 720AM or HERE.

Chop is about 2 years old and is a mixed breed dog, though some may use the term pit bull.

He loves people, but he isn’t always crazy about other dogs. He’s been a tad bit leash aggressive to other dogs at the shelter, but it appears his frustration at being within the confines of a shelter may be the problem, as he reportedly does well with other canines outside the shelter walls. No matter, training is a good idea.

Apparently, he landed at the shelter because the landlord said he didn’t want dogs in his building any longer, which is heartbreaking.

We had planned to go on the air with a dog from Anti Cruelty rescued from the Hurricane Harvey region, but so many of those dogs that are remaining have heartworm disease and are being treated, which is a good thing. Besides, with all the hoopla about the Texas dogs arriving here, we don’t want people to forget the Chicago dogs!

Want to celebrate all the good work Anti Cruelty Society is doing and support the cause? Pints for Pets is October 2 at 6 p.m. CDT at Revolution Brewpub, 2323 N. Milwaukee Ave. Tickets are $40 and include beer, beer, beer, food, and more beer. Register here.