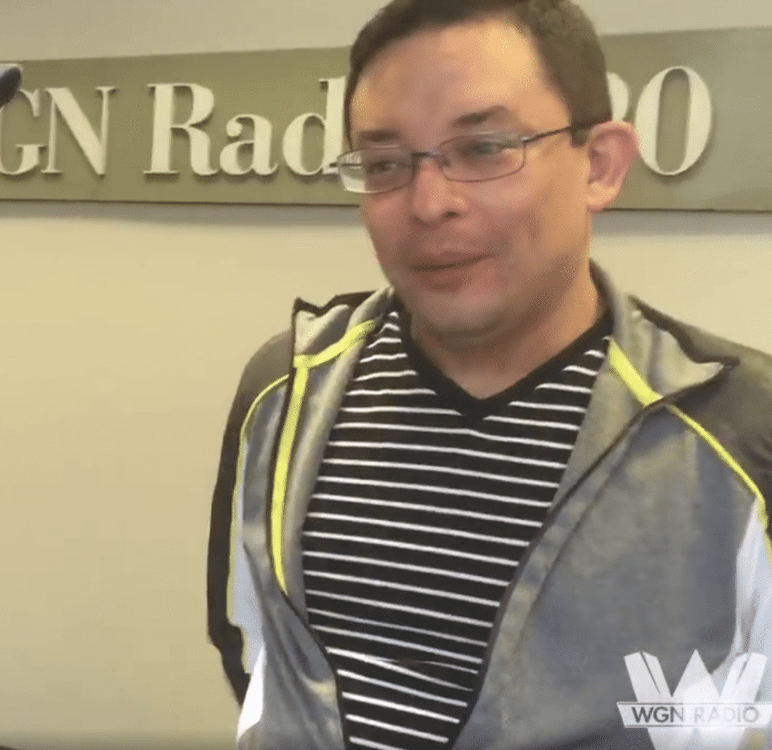 I hardly ever reprint blog posts, but with renewed interest due to a Chicago Sun Times story depicting part-truth, and again calling the facility “troubled,” I’ve been asked to do so. Rather than tackle the specific allegation of “cherry picking,” appearing in the story, there’s a broader issue of continued and relentless attacks on Chicago Animal Care and Control from only one of Chicago’s 50 Aldermen.

There’s no question that Alderman Ray Lopez was a significant factor in the firing of executive director Susan Russell at the end of June. He never let up, and I don’t know why. When she was fired, Lopez’s office issued the following statement (appearing below), which I commented on at the time (also my comments below).

Enough is enough. I can’t explain this behavior of the self-professed animal lover of City Hall (suggesting other Aldermen are not) and suggesting expertise he clearly doesn’t possess. And, in my experience, he’s been unwilling to listen to experts – but instead just a handful of chronic “trouble makers” and some who are as misleading about their missions as Lopez appears to be, albeit politically connected.  Like some public officials these days, he seems to thrive on mayhem and confusion. I happen to know at one recent recent City Hall meeting, he actually appeared to support pet stores selling dogs, which are from mass producers or puppy mills. And told the Puppy Mill Project executive director “you be quiet” during the meeting. Maybe this is all a distraction for other issues occurring in his 15th Ward which residents are rightly concerned about. Sometimes when you act confident and say you’re an expert, people believe it – I don’t believe many in animal welfare, including rescue or veterinary medicine are fooled today. And I did recently phone the Alderman’s office, asking him to appear on-air, but I have not heard back.

Susan Russell, executive director of Chicago Animal Care and Control (CACC) for just over two years was asked to resign Friday (June 29). When she refused to do so, she was fired by Chicago Mayor Rahm Emanuel.

I’ve described the background and offered my view of the city’s explanation, an explanation yes. A valid one, not so much.

Long time critic and by far the most vocal critic (really the only consistently harsh critic) among the 50 Chicago Aldermen, Ray Lopez (15th ward), issued a statement (below).  I feel compelled to comment on, as there are several inaccuracies. Lopez is the self-proclaimed ‘dog alderman.’ In fact, the general public and even his fellow aldermen need to know, the overwhelming majority of shelter professionals, rescue volunteers and veterinary professionals have little respect for him greatly because of his unsubstantiated attacks targeting Russell and animal control, and his attacks on the veterinary community. And his pronouncements regarding “no kill.”

I’ve broken down his comments; my own comments following his.

I appreciate that the Alderman now thanks Russell; he ought to. However he also tried to fire her almost from the start. Lopez and I were at breakfast when Russell was barely two weeks into the job, and talked about wanting to write a press release to call her out. I suggested that instead he try to help. He never wrote that release – but he certainly issued many communications to the media about her nearly from the start.

Lopez received “inside information” all along and many of us know who his “sources” were, and he believed them and schemed. He even organized a bizarre protest, calling for Russell’s dismissal and asking her to “stop killing animals,” which were his exact words. (The criticism now, from the Mayor is that she’s not euthanizing enough).

First off, if an Alderman is dissatisfied with an City department leader’s performance, the appropriate thing to do is simply handle the issue with intragovernmental affairs and the Mayor’s office, not to organize a public rally complete with picket signs. Around six people turned up for his”protest” of Russell. And as many media reporters also showed up, not so coincidentally. At every turn, Lopez has sought to shine a media spotlight on Russell with stories which have been incomplete or downright incorrect, and what the public may not know is the ‘hard time’ he’s given her in hearings at City Hall. I’ve witnessed this for myself.

When I contacted Ald. Burke’s office, in truth, he didn’t know much about details of the resolution, it just sounded good. I’m unsure why Alderman Burke would blindly go down a rat hole with such a novice Alderman. I suspect Burke’s efforts and best intentions were to mentor Lopez.  It really sounded good, so many Aldermen jumped on board; who doesn’t want to see fewer animals killed? However, Lopez never consulted with Chicago’s animal welfare or veterinary community, or the Executive Director of Animal Control or Friends of Chicago Animal Care and Control, so the folks needed to implement whatever he had in mind were taken aback by his resolution, including Russell.

A public official can’t “make” any city “no kill” without a plan, without a general agreement from those who will carry the plan out and with resources to carry that plan out. I told this to Lopez, who was surprised at the cool response to his idea. At that time I assumed at that time that his heart is in the right place, and was grateful for what I assumed was an animal loving Alderman, making companion animals a priority.

Lopez did not convene the workgroup – I did.

The invite for the experts in the workgroup came from me, my email address. Here’s the TRUTH. After guesting on my WGN radio show, Lopez and I went out for breakfast. I told him that in the past I gathered experts together, at first to fight a proposed breed ban – around 15 years ago, at the request of then Alderman Shirley Coleman. The group (which Cynthia Bathurst of Safe Humane Chicago later co-chaired with me) reported ultimately to then Alderman Gene Schulter, and we even had a name “Task Force for Companion Animals and Public Safety.”

This workgroup meeting which Lopez refers did not occur prior to Russell being hired. In fact, she was in attendance.

I offered to gather experts to talk about Lopez’s concept and the hope was to make some changes, to ultimately work together to craft a plan, and deal with his insistence on using the term “No Kill,” which Russell wasn’t crazy about and not hardly alone in her feelings. The majority  in the room found the term “No Kill” divisive for several reasons.

In the statement above Lopez says The Cook County Veterinary Association was in attendance; they were not. And that is because no such group exists – it’s the Chicago Veterinary Medical Association. Also, Tree House Humane was not there. Important? Not really – and the intent isn’t to nitpick but this demonstrates a lack of attention to detail, which is consistent.

For whatever reason during the two work group meetings, Lopez was in my view (and the view of most in attendance), disrespectful to some (mostly those who expressed disagreement with any of his notions, even if the views were based on fact), especially the veterinarians, including one particularly well respected nationally renowned veterinarian. I later privately called Lopez out for his demeanor, as I was embarrassed.

I have no clue what defining animal shelters means. Chicago didn’t do that, nor did our meetings. And humane treatment of impounded animals? If the suggestion is that previous to these meeting animals weren’t humanely treated, that’s crazy. Ald. Lopez, aside from creating drama, has not done anything to date to improve the lives of Chicago’s homeless animals. The problem is that the public may believe him. I am unsure of the grants he speaks about; maybe I am missing something . Of course grants within the rescue community have existed, and continue to but Chicago doesn’t provide any grants. Just unsure of what he means.

If everything we do should be for the animals, I now have a question for Mayor Emanuel as well as Ald. Lopez. If the live release rate increased  considerably to today’s over 90 percent for cats and dogs….and that happens in just over two years – then we are saving animals. Isn’t that the primary mission? What is there to complain about? Of course, I am the first to agree, we can always do better, though the No Kill standard in many communities is 90 percent. Community is the key word, “No Kill” communities create a coalition, agreement among partners – it can not be mandated by a public official.

Lopez continues to push the No Kill agenda. Meanwhile, Russell had achieved what Lopez said that he wanted all along, and despite Lopez’s interference.

I don’t care what you call it – call it No Kill, if you want. But what I have been saying for YEARS is that we need to craft a real plan which includes “safety nets,” some City supported and some by private groups – so people don’t feel the need to give up their pets. Lopez could have been helpful with several of bullet points below. However, he’s taken ever opportunity to criticize, of thought one media outlet why mysteriously considers his word credible. The animal welfare community now knows better.

At the very least many of us had begged Lopez to simply encourage the Mayor’s office to let Russell do her job (as described in numbers 9 and 10 on the list). Instead, he participated in the attempts to micromanage CACC

You can’t do it all at once, and others have additional ideas. I’m unsure what Lopez, the self-professed animal advocate has really done, except to interfere.

And GET THIS: Lopez’s solution, according to a recent appearance with Alderman Nick Sposato (38th Ward) on Chicago Tonight on Ch. 11, is to prevent fewer animals from going into CACC.

In response, the expression on Ald. Sposato’s face was priceless, as he pointed out the law in Chicago (like nearly every city in America), is that the municipal facility must take any animal, all 15,000 that appear at the door.

If CACC is no longer open admission, I do have one question for Ald. Lopez. “While I suppose you prevent any possible overcrowding, then where do propose all the animals go?”

No comment on this one – except to say that I hope this time around really helps and receives and listens to advice from others in the community (not just those he agrees with) rather than obstructs or creates divisiveness.