Why Algae Blooms are Killing Dogs, And Where It’s Happening 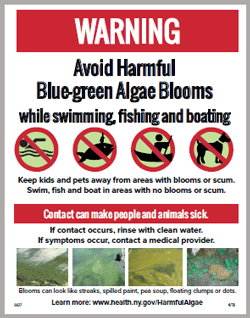 No one seems to know why there’s been a recent escalation toxicity to blue green algae causing untimely death in so many dogs.

Media reports of deaths have occurred in several states, including California, Florida, Georgia, Kansas, Illinois, Maine, Minnesota, North Carolina, Vermont and Wisconsin but since there is no Centers for Disease Control for dogs, no one knows for sure how many dogs have been sickened or where they are all from – likely there have been more. Also, no one knows what the recent outbreak of deaths is all about. Is it a tragic coincidence or something more?

To recent examples, In Wilmington, North Carolina, three dogs died after frolicking in a pond, while another succumbed after a swim in Lake Allatoona, Georgia. 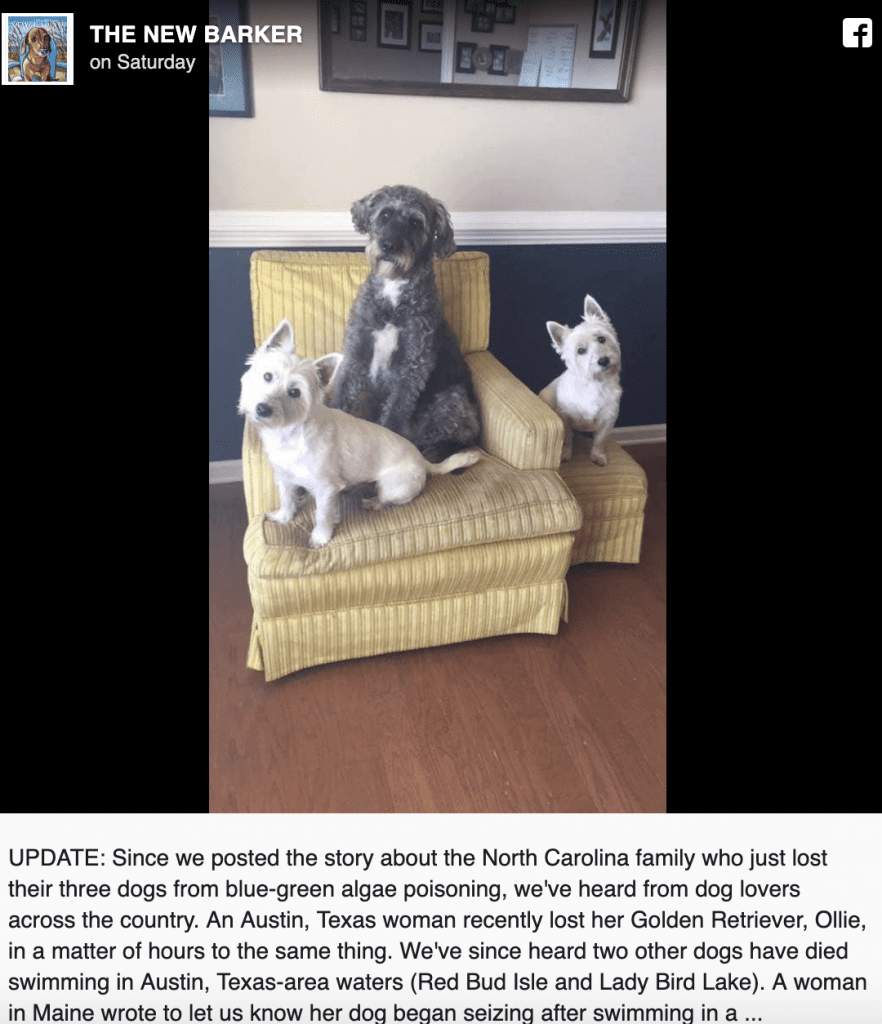 The Centers for Disease Control and Prevention (CDC) says, Cyanobacteria, also referred to as blue-green algae, are microscopic organisms that live in both fresh and salt water, at the surface and below. They usually multiply and bloom when the water is warm, stagnant, and rich in nutrients (phosphorus and nitrogen) from sources such as fertilizer runoff or septic tank overflows.

An algal overgrowth is referred to as an “algal bloom.” Cyanobacterial blooms are usually blue-green in color, but algal blooms can vary in color, ranging all the way to red or brown. Sometimes this growth isn’t even visible, as the water – to our eyes – appears perfectly clear, and this makes it impossible to predict that the water is toxic.

When a bloom occurs, scum (a layer of foul extraneous matter) might float on the water surface, resulting in a rotten plant-like odor. Blooms typically occur during late summer or early fall, but as typified with what’s going on now can occur anytime during the year so long as it is warm enough. 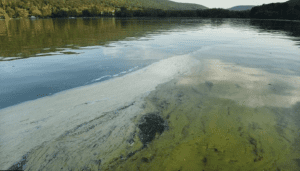 Not all algal blooms are harmful. A cyanobacterial algal bloom can be harmful when the toxins (cyanotoxins) it produces in air and water reach concentrations that are dangerous to people, marine life, and the environment.

In an attempt to warn others, North Carolina offers an algal bloom map. New Jersey also offers warnings. Lake Hopatcong, New Jersey’s largest lake, workers have been laid off, sailing lessons canceled and summers ruined because of the clouds of blue-green algae in the water, blooming in quantities never before recorded.

State warnings that the water is unsafe — which began in June and remain in effect for all but one small branch of the lake — have come during a summer of unusually intense algae blooms in many parts of the country. Fueled by heavy rains and hot, sunny days, the blooms have caused high-season swimming bans from lakes in the Pacific Northwest to the entire Mississippi seacoast. Here’s a document for Montana. 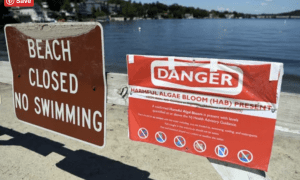 Is this the new norm? Scientists just don’t know, but many indicate climate change is likely playing a role, so may be fertilizer runoff and also introduced zebra mussels.

Of course, officials can only do their best to keep their warnings up to date.

Algae occurs naturally in water, but the blue-green variety are considered Harmful Algal Blooms (HABs). Blue-green algae, also known as cyanobacteria, are “primitive,” photosynthetic organisms that can feed off the sun to make their own energy and release oxygen and possibly toxins in the process.

For dogs, the problem may be worse than it is for people for various reasons – mostly though because of the amount of toxic water they might ingest.

What to Watch Out For

According to the Pet Poison hotline,the common signs of toxicity are:

If ANY of these occurs after swimming, contact your veterinarian or an emergency veterinarian instantly. Sometimes deaths occur quite quickly, within minutes.

If you spot the algae, leave the area and don’t let your dog drink or swim in the water. If your dog has already gotten into a harmful bloom, rinse your pet off immediately in fresh, clean water. Remember to wear gloves to protect yourself. And, if you know you’ve been in contact with the bloom, immediately wash yourself with soap and water.