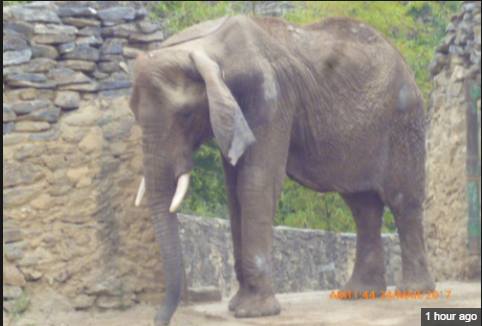 Ruperta the elephant is starving. She is the lone elephant at the Caricuao Zoological Society. That, in itself, is sad. Worse, as described in news reports and from my Facebook friend Darvin Melendez, who lives in Venezuela, zoo animals are dying of starvation.

According to a story from July 2016 on National Geographic, at least 50 animals at the zoo have starved over the past year due to the rising costs of food, caused by the nation’s economic downturn. Rabbits, tapirs, porcupines, pigs, and birds are among the fallen at the country’s northern zoo. Some went without food for two weeks.

The National Parks Institute (INPARQUES), which oversees the country’s zoos, blames the shortages on the nation’s economic crash, caused by a plummet in the price of oil.

While I realize that humans starve all over the world, and things are reportedly so bad in Venezuela that citizens are eating dogs, cats, and pigeons to stay alive, I believe that animals at major certified zoos should be protected by some sort of international safety net, which could come from prospering zoos.

I believe zoos are advantageous. They educate the public about wildlife, give people opportunities to see animals they might never see, and, sadly, serve as a necessary refuge for an increasing number of species.

In zoos, animals are under our care. It is our responsibility to protect them.

Caricuao Zoo staffers have been feeding carnivorous lions and tigers diets of mango and pumpkin. They are also giving an elephant tropical fruit instead of hay. Other big cats are reportedly being fed slaughtered thoroughbred horses from a nearby racetrack.

Venezuela isn’t alone. Animals at the Taiz Zoo in southwestern Yemen are also victims of a nationwide crisis. The raging civil war there prevents tourists from visiting, which stifles the zoo’s revenue. Without funds, animals went without food or medicine while zoo workers went without pay. At least 12 lions and six leopards have died there.

A nonprofit called Four Paws has helped some zoos, but Yemen is too dangerous a place to enter.