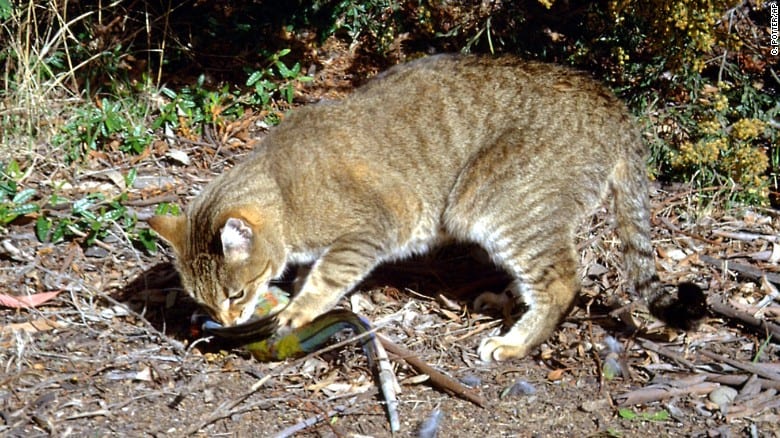 Australia is at war. The enemy, according to the government are feral cats.

Be warned that what you are about to read is true.

According to the Australian Government Department of Environment and Energy in an stepped-up effort to protect and in some cases save endangered indigenous animal species, by 2020:

The idea is to leave out bait with sausage, called Curiosity, containing a toxin. Aside from concerns regarding children, dogs or wildlife getting into the toxin – and even potentially reaching the water table – how is this a humane approach? And if history is any clue, it will unlikely be effective. Throughout time, government programs worldwide have attempted to shoot the cats or poison them – and while individual populations here and there are effectively wiped out, cats’ overall numbers barely declined using these tactics.  Cats, over time, also get wise to the bait.

When numbers decline in cat colonies, they simply have more babies to make up the diminished numbers. Cats are induced ovulators – and females are potentially baby machines.

Cats first arrived in Australia at some point in the 17th century. They are not native to Australia, so native animals aren’t able to protect themselves very well. Since then, feral cat numbers have ballooned, with the population today estimated to cover 99.8% of the country. Having said that while cats have imperiled many species, other factors such as habitat destruction and even climate change have been a factor.

The problem in Australia is complicated by the fact that at least some people allow their cats outdoors, and a small percent of those are not spayed or neutered.  This issue could be rectified – but hasn’t been.

Had Australia (and New Zealand with a similar problem) begun trap-neuter-return (TNR) years ago, they would have at least made some progress. For whatever the reason that hasn’t been tried by the government. TNR is a program where cat caretakers trap cats, have them spayed or neutered and return them to allow them to live our their lives. Yes, they will continue to eat – but if caretakers supplement their diet with tasty manufactured food, they don’t hunt wildlife nearly as often. One challenge is that some cats live in areas where people don’t live.

Also, a downside of TNR is that it takes a while for populations to decline

Here’s the Australian government defense of their tactics: By the end of 2016, researchers from RMIT University in Melbourne reported that an estimated 211,000 feral cats had been culled as part of the initiative, but also estimated that 83 percent of those animals had been shot, rather than poisoned. More up-to-date figures were not included in the progress report relating to the period ending in December 2017.

In order to achieve the goal of eradicating two million feral cats, the first action listed by the government was the “development and deployment of Curiosity, the new humane feral cat bait.” Australia’s Department of Environment and Energy had spent years developing and testing Curiosity, a new form of sausage bait that, according to the government, is less likely than existing baits to be consumed by other animals:

Australia is home to some of the world’s most unique animals and plants. More than 80 per cent of the nation’s mammals and 90 per cent of trees, ferns and shrubs occur nowhere else on earth. Since European settlement, over 130 of known species have become extinct: lost to the world forever.

I most certainly applaud the Australian Government’s goal to recover and protect threatened plants and animals. I do question the need to what amounts to annihilating cats, or at least attempting to do so.