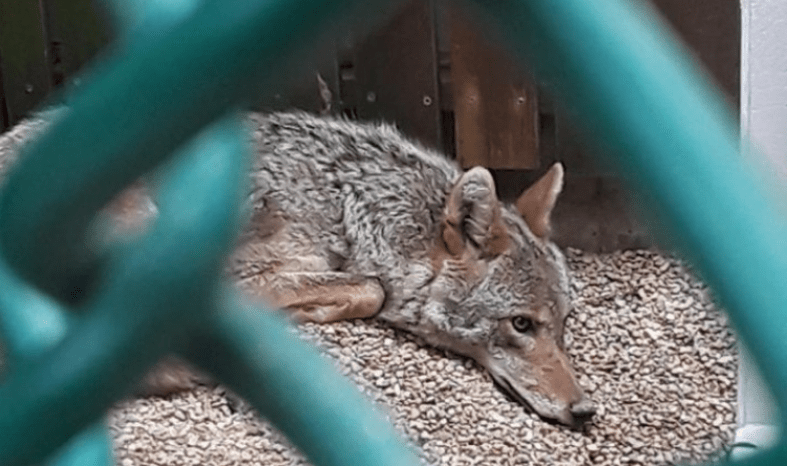 Bring Luna the coyote home. In some ways this is the saddest story I’ve ever covered. And, so far, at least some public officials are investigating – others appear intimidated by the Illinois Department of Natural Resources (IDNR).

Tomi Tranchita bottle-fed and saved four orphaned coyotes. Now, what? She saved their lives, but now the young coyotes were imprinted on people, have no idea how to hunt and she could not find anywhere to legally introduce them. So she spent her own money to obtain appropriate permits, and transformed her backyard into a coyote enclosure For 13 years she cared for the coyotes, passed all inspections without hesitation or question and even invited the public for educational talks about coyotes.

Sure, coyotes howl – but the yard was kept clean and the neighbors not only didn’t seem to mind, but actually supported Tranchita.

Coyote Have to Coyote Hell

One day, without warning, her little coyote haven came crashing down. IDNR brandishing guns, as if Tranchita was a murderer, showed early one morning up at her door. They alleged that she was missing a state license of some type, a $25 permit which she merely didn’t renew. No one had sent a reminder for her to renew. It also turns out others are given a chance to renew if they forget. But not Tranchita.

If her tame coyotes required confiscating, Tranchita asked for some time to put them in their crates. Instead IDNR officers with Cook County Animal Control terrorized the animals – who had previously only known trust from humans. IDNR officers joked about what they were doing, calling dead coyotes better than living coyotes. And shot them point-blank with tranquilizer guns.

Subsequently, three of the coyotes died. The story has changed about how they died. No transparency.

No doubt the way which they were captured had more than something to do with their death. Tranchita said they were perfectly healthy before being confiscated.

Her tame coyotes were killed for no reason. And thus far no one is doing anything about it.  How can this be allowed to happen? This should be a crime. This is a crime. Just because coyotes aren’t domestic pets doesn’t mean they have no value.

A fourth coyote, named Luna, is alive but not well.

Clearly depressed, Luna is at least eating, but not really living life….She barely moves, and even lies in her own excrement. For the first time in her life is living alone. She may also be ill.

At the very least, Tranchita is hoping Luna returns to her home to live out her life. Even if Tranchita missed renewing a $25 permit, the coyotes should never have paid with their lives for what was an innocent mistake. Now, a senior citizen – why can’t Luna simply live our her life in Tranchita’s care> No one ever questioned her care.

IDNR now tells the court – which oddly refuses to allow the coyote to return to Tranchita that she also required a Hound Running Permit – whatever the this antiquated permit is about. According what I now know, other facilities with coyotes have no such permit. In fact, some facilities don’t even have the $25 permit she failed to renew.

A part of the IDNR mission is supposed to be to educate humane care of animals. That’s clearly a joke! After all, this is the same group that supports bobcat and also coyote hunting.

Sign this petition urging Illinois Governor Pritzker to intervene; stop Luna’s suffering and send her home where she belongs.

Here’s a link to a petition with about 30,000 signatures – please add yours.