Can You Catch Parrot Fever? 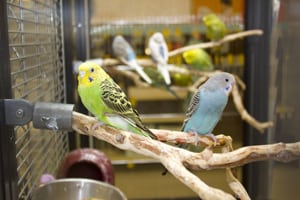 This no likely what Hillary Cinton’s pneumonia was about. In England, a 61-year old many was recently hospitalized with what doctors first identified as the flu, and later as pneumonia.  But his symptoms included forgetfulness, confusion, a rash and even a seizure.

Doctors realized this was more than your ordinary flu, and while he appeared to have pneumonia – this all seemed as if there was another explanation.

It turns out – it was the birds.

This guy revealed he lived with quite the flock, including various parrots, finches, lovebirds, doves, a cockatiel, and a budgie – even some chickens. And that two of his feathered friends had died recently, which raised suspicion his illness might be linked with theirs.

Tests confirmed that the man had contracted chlamydophila psittaci – a flu-like infection that birds come down with and can pass to their owners through bacteria in their respiratory secretions, feather dust or feces. It is sometimes called “parrot fever.”

The good news is that this condition is rarely seen. And that the man was soon treated with additional antibiotics, and soon mostly recovered. Though one lingered problem appears to be knee pain, secondary to arthritis resulting from the infection.

While psittaci was tricky to diagnose in this British bird-lover, it’s generally easier to spot when parrots get sick. They typically have bright green feces and urine.Other clues that a bird is sick with the bug include loss of appetite, weight loss and pink eyes. It can kill parrots and other birds if it’s not diagnosed in time.

Psittaci is far more likely to occur when birds living in crowded conditions, and is exceedingly rare in homes with just one or two birds (though sometimes sick birds are unknowingly purchased). Even then, this zoonotic illness, which people can get, is rare. According to the CDC, since 2010, fewer than 10 confirmed cases have been reported in the United States each year. More cases may (or may not) occur that are not correctly diagnosed or reported.