Canine Flu Slices Big Apple to Its Core, and May Spread

It’s still cold and flu season, for people and also for dogs. The good news is that dogs don’t get the flu from people (though there is one confirmed case of H1N1 in a dog), and people don’t get the canine influenza virus, but dogs sure can. And just as people can get pretty sick, even die from the flu virus; the same is true for dogs. The good news is that a vaccine to fend off the canine influenza virus (CIV) was released last year.

If you haven’t heard about the dog flu, you’re not alone. After all, it’s a relatively new virus, identified in 2004. Though CIV has been identified in 30 states, there are parts of the country where little or no dog flu has occurred. Then there have been “hot spots” where the flu has hit, and greatly runs its course.

However, what’s going on in New York is now being called an outbreak by some. Since the dog flu was first identified in Florida, it’s no surprise that the snowbirds returning to the Big Apple with their dogs likely brought the dog flu back home. While the dog flu has floated around New York for some time, it seems it was only a matter of time before it became a real problem.

A part of that problem is that because the virus is novel, dogs haven’t been previously exposed to build resistance. “Nearly 100% of exposed dogs get the bug, though 20% may never show symptoms,” explains Dr. Cynda Crawford, clinical assistant professor, Maddie’s Shelter Medicine Program at the University of Florida College of Veterinary Medicine, Gainesville – who helped to discover the virus in the first place. Making matters more challenging that 20 percent (of dogs who get the virus but don’t exhibit symptoms) still spreads virus. CIV is most easily spread by coughing and sneezing – just as the flu is spread in people. Even workers at dog day care centers, shelters or veterinary offices can unintentionally pass the virus by touching a sick dog, and then allowing a healthy dog to lick them.

“In New York City, dogs are so social there was bound to be major problem,” says Dr. Paul Schwartz, who practices in Manhattan. Since January 10, he’s seen 60 suspected cases of canine flu in his own practice alone, though most were never confirmed (which is done using when a nasal swab is taken, then a lab does what’s called a polymerase chain reaction or PCR test). He says he’s nearly certain all the dogs first suspected flu had one thing in common – they were all boarded at the same dog day care center.

In addition to sneezing and coughing, and sometimes production of a lot of associated mucous; dogs tend to feel lousy, often run a fever, may be uninterested in food, and the flu can worsen into a pneumonia. In some dogs, CIV runs its course fairly quickly, other dogs do better with supportive medical care, and still others require aggressive treatments. At least so far, Schwartz hasn’t experienced any fatalities in his practice, but there were two very close calls. 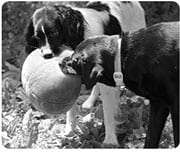 Eric Bellows hasn’t been as lucky. He operates Pack Ethic Rescue, a non-profit, based outside Albany, NY which offers larger dogs a second chance, He sometimes pulls dogs scheduled for euthanasia from New York City Animal Care and Control (ACC). His sanctuary provides basic training, rehabbing when there are behavior issues, and then these dogs once considered unadoptable are adopted. Unfortunately, a few dogs rescued from ACC arrived at his facility with the flu, though Bellows didn’t know it. His entire pack of 40 dogs were exposed; many became very ill and two died, including one of his personal dogs. The canine influenza virus wasn’t merely suspected; it was confirmed by testing from Cornell University College of Veterinary Medicine.

Making matters worse Bellows says ACC knew the dogs likely had CIV when they were transported. Shelter volunteers speaking off-the-record confirm that officials at the shelter are aware of the problem. However as one volunteer said, “What can they do? Due to the economy and a new law in New York that doesn’t allow dogs over 40 lbs. in subsidized housing, they are being slammed with dogs.”

Dr. Stephanie Janeczko, director of medicine at New York’s ACC says she knows that the canine influenza virus is in the shelter, but it’s indistinguishable from kennel cough unless each dog is tested – which isn’t practical. “Aside from affording the cost of the vaccine, it takes several days (for the vaccine) to work,” she explains. “And we certainly don’t have the space to quarantine all dogs coming into the facility.”

Janeczko’s ideal answer is to vaccinate all dogs in places like New York City, where CIV appears to be prevalent. This would eventually create what’s called herd immunity – in theory, enough animals would be vaccinated to lower the spread of the disease.

However, how prevalent is CIV really? The American Society for Prevention of Cruelty to Animals is one of the largest vet clinics in New York City, and medical director Dr. Louise Murray, an internal medicine specialist, says she’s not yet identified CIV at her facility.

However, Schwartz, who says he’s no fan over-vaccination, is now vaccinating for the canine flu, particularly for social dogs (that’s likely most dogs in New York City). He recently saw a dog with the canine flu from Brooklyn. “If it’s in one borough, it will be in all of them, and New York City dogs travel to other cities, of course. It’s pathogenesity (contagious nature) and short incubation makes the vaccine a sensible choice.”

It should be noted that the vaccine doesn’t always prevent flu, but rather in some dogs diminishes symptoms.