Cats Hunting Indoors: It's Only Natural 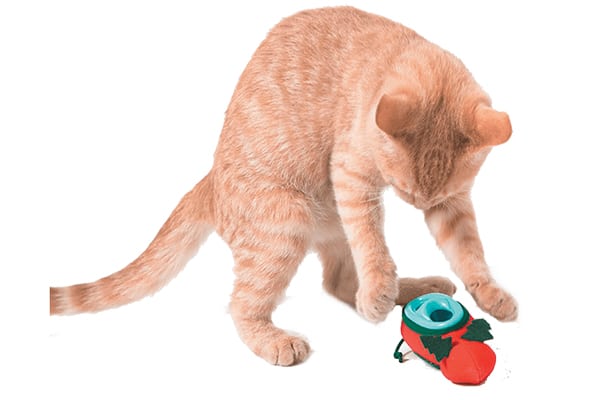 Everyone’s talking about what we feed our cats. Instead, I am writing about how we feed out cats.

Most cat caretakers feed their cats from bowls. And, most of those free-feed, leaving food out 24/7.

In nature, however, cats don’t scarf down meals all at once. They catch what they can when they can. When given the open buffet, though, most cats will eat unnaturally large meals all at once, and will then return for even more. Perhaps, exacerbating the issue is that most cats have little else to do but eat. 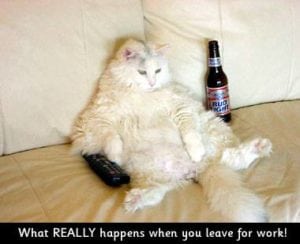 According to the American Veterinary Medical Association (AVMA), the majority of cat owners actually have, on average, just over two cats. With two cats or more in a house, it’s difficult to gauge which cat is eating more. Though you may figure it out when the veterinarian eventually tells you that one of your cats has gained three pounds since her last visit.

Because cats are excellent trainers of humans, they train us to keep filling the food dish.

Feeding exclusively moist food doesn’t solve the problem. Caretakers put down the food at prescribed times, the cats eat it, and it’s over in minute or two.

To survive outside, cats catch somewhere around 8 to 13 small prey in a day. The edible contents of the average mouse or bird is about one to two tablespoons, not a heaping one-half cup at a time.

Cats are born with a prey drive. They are hard-wired to seek, hunt, and pounce. In our homes, we don’t give them the opportunity to feed in this manner, and that needs to change.

Having toys to chase or pounce is necessary. Still, it’s not the same as hunting for a meal. 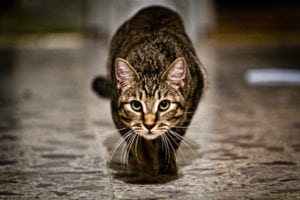 Researchers have studied how community cats and barn cats naturally spend time. According to “Behaviour and ecology of free-ranging farm cats,” from the International Journal Behavioural Ethology, outdoor cats rest or sleep about 62 percent of the day. Much of that resting time occurs after the series of seeking, hunting, and feeding, which accounts for 19 percent. The remaining time is spent grooming or playing. (Various other studies confirm similar data.)

Inside our homes, seeking the food is predictable and doesn’t account for time or effort; hunting is not necessary, though certainly there’s feeding… a lot of feeding. In part, it explains why 59 percent of cats are overweight or obese, according to the Association for Pet Obesity Prevention.

I suggest by offering food on a silver platter or bowl, we’re not allowing cats to be cats. 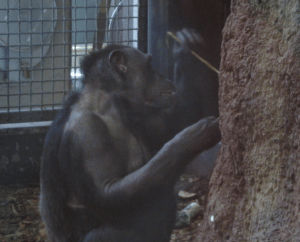 It turns out many captive and wild animals would rather work for food, so why not dogs and cats?

There is mounting evidence to demonstrate that many animals would rather work for food than have it freely available, a phenomenon called contrafreeloading. So far, studies have been limited to some zoo animals and lab rodents. If the grizzly bears, meerkats, and rats studied prefer to labor to get their meals, why not cats and dogs?

Of course, feeding cats appropriately is only one means to enrich lives, but just because a cat is scarfing down food doesn’t mean there isn’t mounting anxiety. In some cats, chronic stress as a byproduct of living in a dull environment leads to what has been coined idiopathic feline lower urinary tract disease (FLUTD), which was found to be like cystitis and not a bacterial infection. Now, Buffington calls this stressed-induced illness “Pandora’s syndrome.” Over the years, lots of medications have been tried, but none have been successful.

However, Buffington discovered that providing structure and an enriched environment can solve the problem or prevent it in the first place.

FLUTD, or Pandora’s syndrome, makes it painful to urinate, which can cause many cats to urinate outside the litter box. Having accidents is a significant cause for relinquishing cats to shelters or sometimes just booting them outside the house.

Cats are hunters. Allow them to hunt. And, yes, cats can hunt indoors.

Some veterinary behaviorists and cat behavior consultants have been talking about the concept of creating ways for cats to activate their prey drive indoors. Dr. Elizabeth Bales put all the science together and created a feeding system for cats called the Indoor Cat Feeder.

The feeding system includes objects resembling mice. Cat owners deposit kibble into the “mice” dispensers, which consist of a soft outer skin to simulate prey and a BPA-free plastic inner container, which holds one-fifth of the cat’s daily ration. There are two holes on the back of each food dispenser.

The idea is to split a meal between the five dispensers and ultimately to hide them (beginning by “hiding” them in easy places for the cats to find and increase the level of difficulty as needed). Cats learn to hunt indoors by finding each food-filled dispenser, pouncing on it, and manipulating each device to dispense the small meal.

In multi-cat homes, generally there’s enough food for all if you purchase one system per cat. Another option is to continue feeding as you are now, but to leave some (perhaps around 25 percent) of the cats’ meals in the dispensers, so cats are busy “hunting.” While you’re at work so are your cats. Over time, generally, all cats get what they need. (When ordering the Indoor Cat Feeder, use the discount code CATSWINN to support the nonprofit Winn Feline Foundation.)

The Indoor Cat Feeder isn’t the only choice; there are lots of food puzzles and interactive feeders available at most pet stores and online.

AIKIOU is a champion of interactive feeders, including one called the Thin Kat. 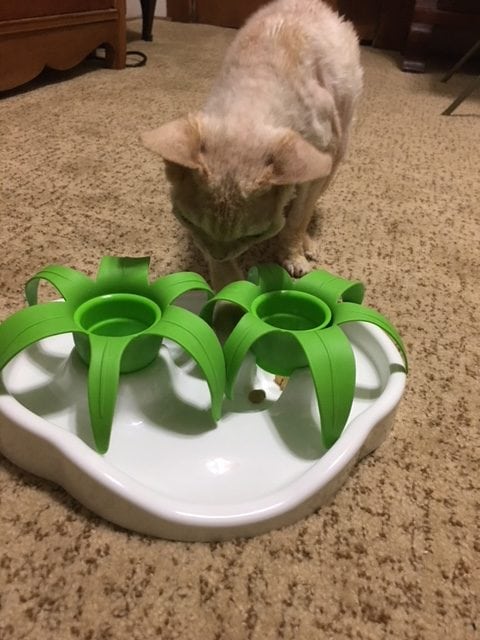 Northmate makes a product called the Slow Feed Bowl. And, a favorite is the Catit Design Food Maze. 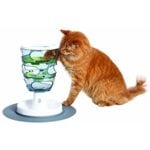 If you give your cat moist food, take the plastic lids  that you seal the cat food with, turn them upside down, and use the same technique to disperse the food to different locations around the house.

For families with dogs, keep the food dispensing objects inside cat beds or boxes, on cat trees, on window ledges, or on pieces of furniture higher than your dogs can reach.

There are ways to encourage cats to be cats, even indoors.