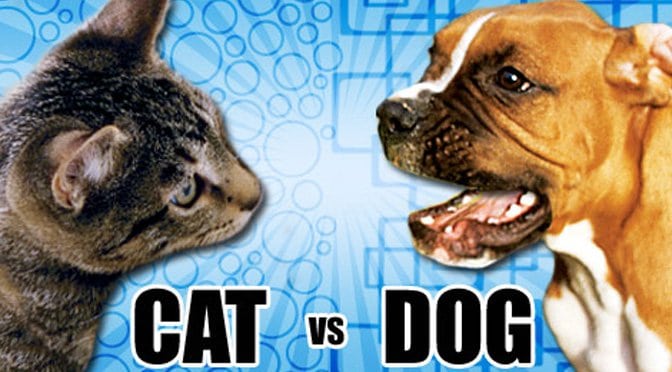 It’s as if there is a competition—people forever argue about who’s got more smarts, cats or dogs.

A new study led by Suzana Herculano-Houzel, neuroscientist and associate professor and associate director for communications at Vanderbilt Brain Institute, believes her group has come close to answering this question of the ages.

Researchers suggest the key to intelligence is how many cortical neurons there are in a brain’s prefrontal cortex. Their research suggests domestic dogs have 530 million of these neurons, while cats have about 250 million. But, does this really mean cats are half as smart as dogs?

Before dog lovers begin to ask for bets to be paid off, consider a previous study, which indicated the reverse answer. The study, published in Proceedings of the Royal Society B in 2013 suggesting cats lead the neuron race with 300 compared to 160 for dogs.

Evolutionary biologists agree that, over evolutionary time, what’s most important isn’t the size of the brain. If brain size indicated intelligence, whales would rule the world. Instead, an indicator is several key brain regions increased in size relative to other regions. Great apes (especially humans) have increased white matter in the prefrontal cortex.

The prefrontal cortex is the place in the brain most associated with intelligence, responsible for information processing, planning, introspection, and more.

“I would bet money on a large dog over a cat any time,” Herculano-Houzel said in a Vanderbilt-produced video. “They [dogs] have the biological capability of doing much more complex and flexible things with their lives than cats can.”

The results of the study are described in a paper titled “Dogs have the most neurons, though not the largest brain: Trade-off between body mass and number of neurons in the cerebral cortex of large carnivoran species,” which was accepted for publication in the open access journal Frontiers in Neuroanatomy.

Herculano-Houzel and her collaborators from around the globe picked carnivores to study—beyond dogs and cats—because of their diversity and large range of brain sizes as well as the fact that they include both domesticated and wild species.

However, one common flaw of this study and others comparing dogs and cats is that there is no effort to question if there are breed differences, say between Border Collie intelligence and the IQ of an Afghan Hound. Or, between a Maine Coon cat and a mixed breed domestic shorthair.

This study focused on carnivores, and most veterinary nutritionists today no longer classify dogs as carnivores. In fact, dogs’ nutritional needs are very much like our own.

The researchers analyzed the brains of one or two specimens from each of eight carnivore species: ferret, mongoose, raccoon, domestic cat, dog, spotted hyena, African lion, and brown bear.

They expected that their measurements would confirm the intuitive hypothesis that the brains of carnivores should have more cortical neurons than the herbivores they prey upon. The theory is that hunting is more cognitively demanding compared to the herbivore’s primary strategy of finding safety in sheer numbers or running for their lives to survive.

However, this presumption was proved wrong by Herculano-Houzel and collaborators. The researchers determined that the ratio of neurons to brain size in small- and medium-sized carnivores was about the same as that of herbivores, suggesting that there is just as much evolutionary pressure on the herbivores to develop the brain power to get away from predators as there is on carnivores to catch them.

Researchers were surprised that the brown bear’s brain is 10 times larger than a cat’s, but has about the same number of neurons. However, complicating this matter is the researchers’ surprising identification as brown bears being carnivores; they are omnivores.

One surprise of the study suggested the raccoon, identified as an outlier, is on the brainy side, nearly genius. It turns out that raccoons pack the same number of cortical neurons as a dog into a brain the size of a cat’s. Raccoons are also not strict carnivores, but totally opportunistic eaters.

“Raccoons are not your typical carnivoran,” said Herculano-Houzel. “They have a fairly small brain, but they have as many neurons as you would expect to find in a primate … and that’s a lot of neurons.”

Defining intelligence has always been a daunting task.

It’s hard to describe something so challenging to define. It turns out, definitions of intelligence vary. This one is from Merriam-Webster: “Ability to learn or understand or to deal with new or trying situations; the skilled use of reason; the ability to apply knowledge to manipulate one’s environment or to think abstractly as measured by objective criteria.”

Charles Darwin’s definition: “‘Intelligence is based on how efficient a species became at doing the things they need to survive, and one might argue that by this definition all species that stay healthy, remain numerous, and avoid extinction are equally intelligent.”

In other words, it may come down to what my friend, certified cat behavior consultant, and author Beth Adelman has said, “Dogs are better at doing dog things (for example, running a long distance to follow a scent) and cats are better at doing cat things (pouncing on an unsuspecting mouse).” And, in the spirit of that same definition, aardvarks are best at doing aardvark things…whatever those may be.

This definition of cat intelligence from 1940 was published in the the Journal Comparative Neurology: “Cats are self-centered beings with no empathy for others. They can learn only with negative stimuli, and have far more limited capacity to learn compared to dogs.”

Today, we know this is absolutely untrue.

When it comes to learning, most tests demonstrate cats are about equal to dogs. The big difference is that if a dog is stumped, the pup will likely ask for help. Dogs will look to humans for guidance or even to do the job for them, whereas cats will keep trying independently until at a point. Cats will quit trying sooner than most dogs.

This doesn’t ultimately prove that dogs are more clever, just that they have the advantage of evolving with humans, and being domesticated at least 20,000 years earlier than cats. And, it may be that cats are less patient as well.

Cats hunt for themselves—it’s how they were first domesticated: to keep vermin away from stored grain. Their hunting just happened to benefit us, and often it still does. Certainly, survival skills of today’s domestic cats outrank those of most dogs.

Some experts contend that social animals are usually smarter, because they need to communicate with one another, and this ability is correlated to intelligence. While dogs are social, in third-world nations where dogs roam, they rarely hunt cooperatively (like most wolf or lion species). In fact, dogs rarely hunt. They scavenge off human waste at garbage dumps, out of trash, or ask for handouts. Cats are clearly more resourceful, and many individuals remain expert hunters.

It’s only in recent years that experts began to reconsider cats as social animals; they were always thought of as independent, solitary, and less intelligent based on lifestyle.

Others argue that hunting alone (as domestic cats do) requires more planning (remember: That’s part of thought that occurs in the important prefrontal cortex), and a combined intelligence of a team doesn’t exist. It’s up to one cat to get it done.

Are dogs selfless and cats selfish? Risking riling cat owners, John Bradshaw, author of Cat Sense: How the New Feline Science Can Make You a Better Friend to Your Pet, laughs and then answers in the affirmative. He adds, “Dogs attend to us all the time. Dogs can’t be easily trained to be independent. Dogs typically choose to focus on the person and not the task. Cats are about the task, and arguably that requires more intelligence.”

“Cognition is recognition that there are different types of intelligence,” said Brian Hare, founder of the Duke Canine Cognition Center, and co-author of The Genius of Dogs. And that is as true for dogs and cats as it is for people. You can be amazing at math and horrible at English. The individual differences are significant.” Though Hare concedes that cats are wired differently (than dogs).

Because dogs are so much like us, we are pretty adept at understanding them. Perhaps, the problem is our limited intelligence, or at least limited ability, to fully understand cats.

This wouldn’t be surprising since cats have been “playing people” for their own gain for as long they’ve been domesticated.