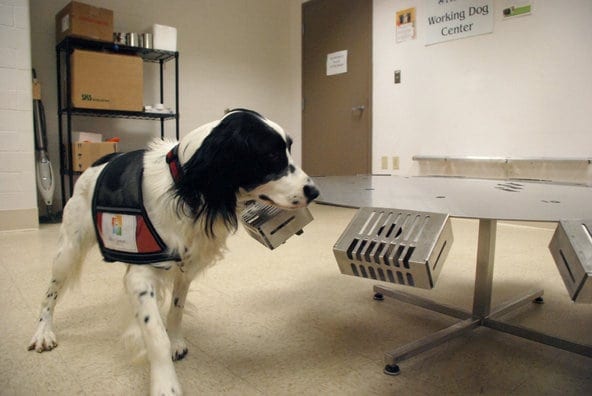 Contributions further transformational research as dogs are now being successfully trained at Penn Vet Working Dog Center to sniff for this cancer, and on the early stages of the disease! This is huge, and far, far better than current diagnostics. Researcher Dr. Cynthia Otto says her trained dogs are hugely successful at sniffing out cancers. Once the chemicals are identified, this may well lead to a blood test for ovarian cancer.

2. When Bryce and Jennifer Henderson decided to take a mix breed pup named Arbor in from the animal shelter – but they had no idea they were adopting a real Paw-Casso. With lots of positive reinforcement she learned to take the brush in her mouth, walk to the canvas and brush back and forth at just the right distance to make artful strokes. There’s even creativity involved as she chooses different brushes for different types of strokes for the paintings, valued typically at over $400. Arbor has performed live on television and before audiences at fundraising events. She even painted in front of the Bellagio Hotel in Las Vegas.

3.Tucker doesn’t sniff out cool stuff like money, drugs, fugitives, explosives or missing. Tucker sniffs out whale poop. In fact, Tucker is the most important member of the crew searching for whale poop because he is the one they depend on to find it up to a mile away. Killer whales in Puget Sound were placed on the endangered species list in 2005 and they are not recovering. A team of researchers is trying to find out why by studying their poop or what they consider “scientific gold.” From the poop, researchers can discern if disease is impacted the killer whales, and even detect individual DNA. Tucker’s official job title is scat-detection dog.

4. Bug sniffing dogs can now be certified as “professionals” by the National Entomology, Scent Detection Canine Association or NESDCA was formed by Pest Control Professionals to ensure the highest standards for Entomology Scent Detection Canines are upheld. There are even two training facilities. Dogs are trained to sniff out bedbugs, termites and/or rodents. A part of the mission is to educate consumers about the benefits of using properly trained entomology scent detecting dog teams in the process of locating, and eradicating pest problems.

5.Dog can be harvesters of valuable truffles. Like any other job some dogs are better at this job than others. So, now there’s even a competition for the best, The North American Truffle Dog Championship. There are dog trainers and even training facilities that specialize in teaching dogs fungus finding in the woods.