Dog fighting isn’t about race, income or culture. “That’s a stereotype being perpetuated in the past couple of weeks by the media,” says Chicago community activist Melia Carter. 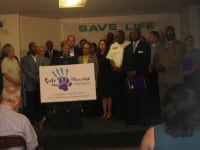 A new coalition of Chicago community leaders, city officials, elected officials, members of the faith based community and the police have all teamed with local humane and animal related groups to create an initiative which Chicago Alderman, Walter Burnett says “gets to the heart of the problem of dog fighting.” It’s a campaign called Safe Humane Chicago.

“It’s about getting to kids before the gang bangers and other criminals do,” says Cynthia Bathurst, executive director of the Dog Advisory Work Group, and (with Carter) is a co founder of Safe Humane Chicago.

Marie Belew Wheatley, president and CEO of the Denver based American Humane Association says Safe Humane Chicago could be a national model. “When we teach empathy, the kids aren’t learning violence. This initiative is about dogs, it’s about kids – but moreover it’s about community.”

Whoopi Goldberg simply had it wrong. When the actress started her gig as a co-host of ABC-TV’s The View said, (Atlanta Falcons quarterback) Michael Vick was raised in the South, and therefore dog fighting was a part of his cultural heritage.

“C’mon, Vick is a multi millionaire, and gambled who knows how much money.” says Burnett, who represents the diverse 27th ward in the Windy City, which includes citizens of various economic levels. “Dog fighting isn’t only a crime of poor people.”

Officer James Conlan of the Chicago Police Department Animal Crimes Unit confirms dog fighters even have their own websites and forums on the Internet. “Certainly, there’s gangbanger involvement, but it’s much more,” he says.

Crimes trickles down, to elsewhere in the community, even nearby communities. Burnett says one of those crimes directly related to dog fighting is dog napping. “I have small dog and I have a larger dog. The larger dog is a pit bull who’s as sweet as can be and I’m worried about both them getting stolen and used for fights. I had a neighbor who had a Rottweiler. He actually was stolen and was never was violent or anything. And the kids stole him to fight him with other dogs.”

Brendan Reilly, also a Chicago Alderman (42nd Ward) agrees that crimes you might not think related to dog fighting indeed may be. Robberies, for example, may be a way to get the money to gamble on a fight.

The only culture common among dog fighters, according to Carter, is a culture of violence. So, a goal of Safe Humane Chicago is to intervene, and prevent children – in particular – from getting involved in dog fighting in the first place. The goal is to teach an alternative to violence – that violence, for example, isn’t required to train a dog.

Reverend Dr. Walter Johnson, an influential religious and community leader in Chicago is minister at the Wayman African Methodist Episcopal Church, as well as the executive director of the Alliance for Community Peace and a member of the Safe Humane Chicago Advisory Committee. “Of course, I believe we can come together as a community and make a difference. It’s a matter of education.” Johnson concedes that until recently, even he never fully understood the link between animal cruelty and violence to people.

There are numerous studies illustrates this link is real. A study by the Massachusetts Society for the Prevention of Cruelty to Animals and Boston’s Northeastern University showed those who attend dog fights and witness other forms of animal cruelty are five times more likely to commit violent crimes against people.

Perhaps more graphic than statistics are real-life examples: Burnett says some kids in his ward recently killed geese and ducks for no obvious reason, except the ‘thrill.’ He says, “These were little itty bitty children, and seeing blood and killing God’s creatures didn’t bother them. Obviously, they’ve previously been exposed to violence. Today, it may be geese, tomorrow it’s a dog and the next day a friend they could beat upside the head.”

So, the idea behind Safe Humane Chicago is to expose kids to humane treatment of canines by using calm, trained examples of what most of the dogs in America really are. Trained handlers bring dogs visit community centers, churches, schools and other venues to demonstrate how to approach a strange dog, and how dogs learn through motivation rather than intimidation or force. Carter says kids in the program previously never had a positive experience with dogs, “So they’re terrified when we first bring in these well trained dogs. But by the end of the program – everyone wants to pet the dogs.”

Chicago’s planning for the Safe Humane initiative began well before the Michael Vick’s problems, although Carter concedes, “I’m glad people are paying attention, and now the media and public see dog fighting for what it is – and just how prevalent it is.”

“Educating the public and raising the awareness of cruelty towards animals can ultimately prevent many of the crimes that are a direct result of this violence," adds Interim Chicago Police Superintendent Dana Starks.  "We encourage law enforcement agencies across the country to examine this newly formed partnership so their communities are aware of the potential risks and dangers,"

What to look for….What to do. . . If you suspect they’re fighting dogs

Even beat police officers who work the streets rarely witness actual dog fights in progress. “Of course, these are covert activities which don’t take place in the open,” says Officer James Conlan of the Chicago Police Department Animal Crimes Unit. “Don’t be afraid to tip off police if there’s an actual fight in progress, or if you suspect dog fighting is going on – even if you don’t see the actual fighting.”

Often times, there are only subtle clues that dog fighters operating nearby. For starters, there are often lots of dogs – most often pit bull looking dogs. Conlan says, “There may be a treadmill or a junky old carousel for the dogs to chase in circles to build stamina. And to build viciousness, as small animals or small dogs are used as bait (attached to the carousel for the dogs to ‘catch.’).  There may be old tires hanging in the yard or a spring poll. There are people who manufacture these (spring poles) underground. This is literally a spring with a pole and bite piece on it that dogs hang from to build jaw strength.”

Another clue is dead cats or rabbits in the trash – the animals used as bait.

In most places, reports of suspected dog fighters can be made anonymously.