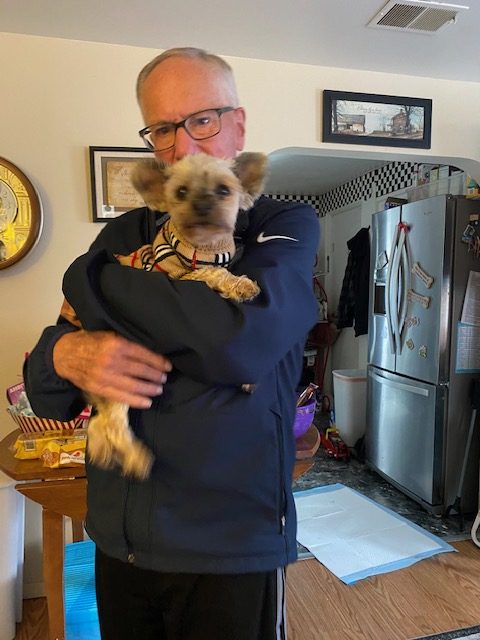 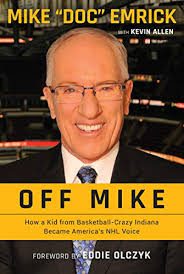 Mike Doc Emrick is a longtime friend of the program, and the legendary Hall of Fame NHL broadcaster and explains why he just announced his retirement. Listen HERE as Doc talks talks about his new book Off Mike: How a Kid from Basketball-Crazy Indiana Became America’s NHL Voice.

It didn’t surprise me to learn that proceeds from his book benefits animal rescue. I explain how a funny thing happened to me following a WGN Radio pet adoption segment, and this how I met Doc, which we talk about. And that Doc privately donates to Chicago area animal shelters.

An entire chapter (Chapter 10) in the book is devoted to his animals, and we chat about those various pets. As well as how Doc missed calling the 2002 Olympic hockey team games to tend to a sick dog, and was going to go as far as a kidney transplant (a new procedure at the time).

Doc says, “It is my belief we will get to see these creatures again one day.” I hope he is right.

Doc reminisces about how when he was a kid he listened to and was inspired by WGN Radio, including Cubs broadcasters Jack Quinlan and Lou Boudreau and Bob Elson on WCFL. We also remember Lloyd Pettit, “A shot and a goal!”

Doc shares an Eddie Olczyk story, one of the first times he met Eddie. 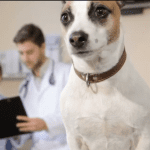 I explain that the dog flu or canine influenza virus is still around. Unlike our own flu, there is no season for dog flu, except when dogs are around other dogs most often. So when dogs are being boarded such as at Thanksgiving or Christmas that is when dog flu is most prevalent. Despite the real possibility of hospitalization and even a two to five percent of death rate as a result of dog flu, the dog flu vaccine is considered optional.

Bordetella or kennel cough is a routine vaccine, and while the persistent cough associated with bordetella is uncomfortable, hopitaliations are rare and the death  rate is likely somewhere well under one percent.

Just as physicians are supporting the human flu vaccine more than ever for fear of the flu combining with COVID-19, veterinarians don’t want to see a dog sick with both dog flu and bordetella. While there’s no vaccine (yet) for the Sudden Acute Respiratory System virus-2 that causes COVID-19 in people, there is a vaccine for both dog flu and also a vaccine for bordetella – so why not take advantage of that and pair up for protection?

I also hosted a video on this topic.