Flying with comfort animals/service animals has become very complicated in recent years. In part, because some abuse the system. However, in my view, the airlines themselves are also responsible as are ignorant pet caretakers.

Delta Airlines said Monday that it will ban all emotional support animals on flights longer than eight hours and will ban all service and support animals under four months of age on flights no matter the duration of the flight. The policy will go into effect Dec. 18, no doubt, not so coincidentally ahead of the Christmas holiday travel season.

The airline said the updated support and service animal age requirement aligns with the vaccination policy of the CDC, and the eight-hour flight limit for emotional support animals is consistent with the principles outlined in the U.S. Department of Transportation’s Air Carrier Access Act. 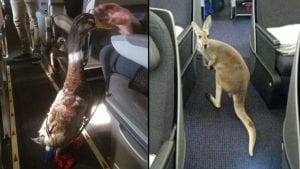 This will no longer happen on Delta, no ducks or wallabies as “comfort animals”

Delta Airlines led the industry making several sensible, common sense changes in their rules (which other airlines followed) in January. Delta created a no fly list, which includes spiders, snakes or other reptiles and sugar gliders. Chickens and birds of prey are also verboten.

Is this dog a pit bull? Or a mix with pit? Who knows? Apparently Delta Airlines does, or they say they do. This dog happens to provide support for a veteran with PTSD. But can no longer fly on Delta.

This summer Delta shocked animal welfare advocates and veterinary professionals by banning pit bulls from flights, even if the dog is an absolutely legitimate and potentially life-saving service dog.  The ban is based on a general look and not a real breed, per se. And, of course, there’s no scientific evidence to suggest a ban makes any sense. And while Delta is a private business, I’m still unsure how this decision has not been legally challenged.

The changes follow an 84 percent increase in reported incidents involving service and support animals since 2016, including urination/defecation, biting and even a widely reported attack by a 70-pound dog. Delta carries approximately 700 service or support animals daily — nearly 250,000 annually. Putting this into perspective, Delta carries more than 180 million passengers annually. These changes follow a series of unfortunate events in 2018, greatly occurring on other airlines.

As a result of the most recent policy changes, customers ticketed on or after Dec. 18 will no longer be permitted to originate travel with emotional support animals on flights longer than eight hours and will no longer be permitted to originate travel with service and support animals under four months of age regardless of flight length. Customers with tickets purchased prior to Dec. 18, who have already requested to travel with an emotional support animal will be allowed to travel as originally ticketed. Delta said it will contact customers to adjust reservations if the policy update impacts their travel plans. The full policy and additional information on types of accepted animals and other questions related to traveling with service and support animals is available on delta.com.