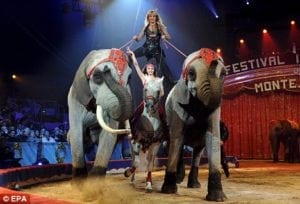 Greenland couldn’t be purchased from Denmark, but Denmark just did right for elephants. Denmark is spending 11 million kroner ($1.6 million) to buy the country’s last four circus elephants to give them a proper retirement. Meanwhile, Denmark is taking action to ban wild animals in circuses.

So, where do Ramboline, Lara, Djunga and Jenny live? Unsure there’s an opportunity an AIRBNB opportunity for homeless elephants. And, so far, the government hasn’t announced where the elephants will call home. In the U.S., Illinois has led the way to ban circus elephants and hopefully other states will follow.

A real issue to to protect wild elephants, and to somehow stop poaching. Both elephant species (and a subspecies) remain imperiled.