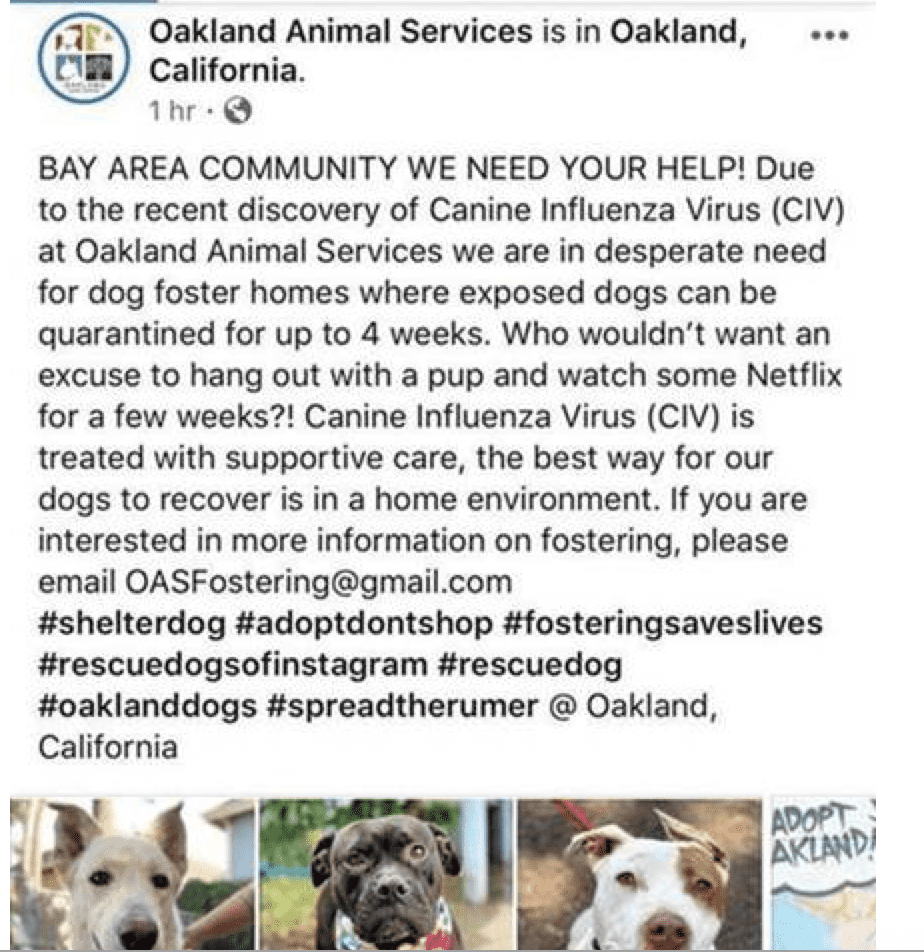 Ignoring the dog flu or canine influenza virus can lead to consequences. And right now Oakland Animal Services is paying the price with occurrences of the fu. To be clear this is a factor of not enough individuals vaccinating in the community; the shelter did nothing wrong.

If on intake they accept a dog harboring the virus, and other dogs at the facility aren’t vaccinated an outbreak will easily happen – it’s inevitable.

Dogs with the virus may be not symptomatic  – so it may be impossible to discern. Other dogs may break out days after intake with symptoms, but in the time they’ve been at the shelter they spread virus.

The shelter response in this instance is to quarantine some and also to add more foster families as possible.

In January through March of last year there was a dog flu outbreak at the same facility. And this sort of outbreak can and has happened in many other shelters throughout the country.

After an H3N2 outbreak sickened thousands of dogs in Chicago in 2016, several Chicago animal shelters experienced outbreaks. When the community began to vaccinate (which, of course couldn’t happen until the vaccine became available for the H3N2 strain), not only did individual dogs benefit by not getting sick, the community did as well. Similarly, some shelters in Chicago began to vaccinate dogs on intake. This combination of the community and individual shelters vaccinating for flu proved to be a secret sauce to prevent shelter outbreaks.  All that combined with shelters being more observant of any potential signs of upper respiratory infections in dogs.  And a quick response time of getting dogs into foster homes, closing the shelter for intake (for a short period of time) and enhancing cleaning protocols has moderated the impact of shelter outbreaks.

The outbreak happening now in Oakland demonstrates that dog flu is here, and that vaccination very much matters for communities at large, as well as preventing disease in individual dogs.

With a history of the canine influenza virus in California, it’s no surprise really that the virus has again occurred at the shelter.