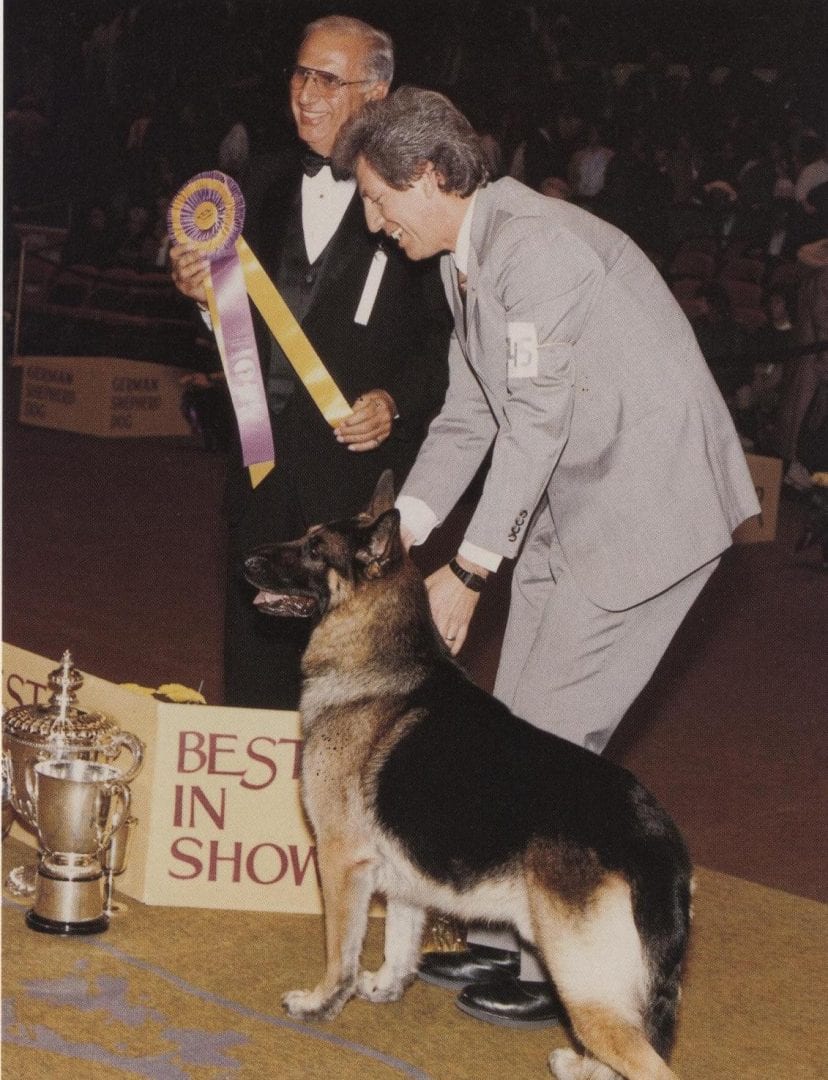 Louis Auslander dedicated much of his life to dogs. He wasn’t only responsible for saving the Chicago Show, the International Kennel Club (IKC) of Chicago Kennel Club Dog Show, which was held at McCormick Place, became one of the most important and successful shows in the nation. Auslander passed away Monday May 6 at the age of 94. 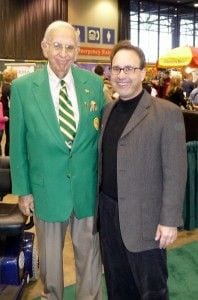 Here I am with Louis Auslander

In May 1990, Auslander, the American Kennel Club (AKC) board chairman and then was appointed as interim president, being the only individual to hold both positions. While he supported pedigreed dogs, he invited shelters to his dog shows. “Why not?” he once said. “We support all dogs.”

Many at the AKC grumbled at the time at the idea of including support of shelters and mixed breeds, but Auslander was a no nonsense guy who called those objections as he saw them, “Bull****”

In fact, that is how he began in the dog world, but cleaning up, well, dog poop. The shovel and bucket were the tools of his cleanup trade. Soon he opted for a more lucrative and neater line of work. He and his now deceased wife of nearly 60 years, Seme, bred Miniature Schnauzer, Fox Terriers and Whippets. 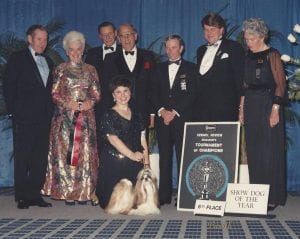 In 1969, he decided to try judging. He once told me. “I think judging suits my personality best.” Auslander began by learning a single breed but was ultimately an all-breed judge and judged Best in Show events around the world. In 1987, he judged Best in Show at Westminster at Madison Square Garden in New York City.

“Of course meeting and judging so many dogs could have a down side,” he said and laughed, “I was announcing one dog a Champion when he did a number on my trousers. I like to say that no matter what happens, I can maintain my integrity. Of course, at times It’s easier than others.”

When Auslander and the late Dorothy Donnelly took over the IKC show in 1983, the once great show – held since 1883 (as the Chicago Kennel Club originally) was on the brink of collapse. 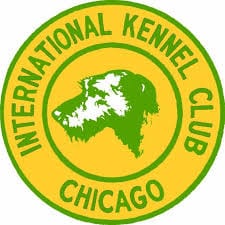 The location was moved from the old Amphitheater in a rundown neighborhood to McCormick Place, a showcase along Chicago’s lakefront. Also, Auslander was intent on the IKC cluster being more than a beauty contest; he wanted a real crowd pleaser.

“Let’s face it, watching confirmation for hours at a time is about as exciting as watching grass grow,” he said. “I wanted our show to be family friendly, fun to be at.”

Auslander who was among the first to invite participants for what was then a new competition called agility (obstacle course for dogs), and events like Freestyle (dancing with dogs) and Frisbee disc demos to the dog show.

As a kid, growing up in Chicago, graduating from Roosevelt High School, Auslander had several family dogs, but didn’t really connect with them in a special way. He was a member of the Calvary in World War II.

1945 he once told me was the biggest year of his life, when he met Seme.

It all happened on beach near the summer house his folks had in Michiana Shores, MI. Lou and his cousin saw two girls. He told me in 2003, “I remember the conversation, as if it happened yesterday. We asked them, ‘Do you know where the tennis courts are?’ How about that for a pick up line?”

You see Lou and his cousin had no interest in tennis, but they were sure interested in the girls. The fast-talking guys managed to arrange a double-date for that night. But there was an issue. Both Lou and his cousin wanted the brunette. “I wasn’t crazy about the blonde, and so I told my cousin he had no choice but to let me go with the dark haired girl. Luckily, my cousin was a submissive-type.” 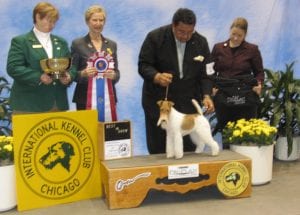 He added if it wasn’t love a first sight, it was pretty darn close. As for Seme, he says, her wire fox terrier, named Topper, approved of him, which was a necessity. 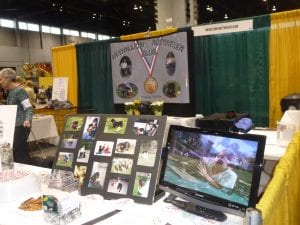 Auslander brought rescue groups, from pure bred and shelters both into the dog show

Auslander’s formal involvement in the dog world came around mid-life. He was busy making a living (as a general contractor, and then insurance adjustor), and raising his three children. In 1966, yet another cousin, helped convince him to show a Miniature Schnauzer. “This dog had every fault in the book,” he recalled. Eventually, he showed several champions, but mostly he said, “I learned how to lose an awful lot.”

Weary of the grooming involved in the breed, he decided on breeding and showing Whippets. He succeeded to eventually showed the number one Whippet in the U.S. 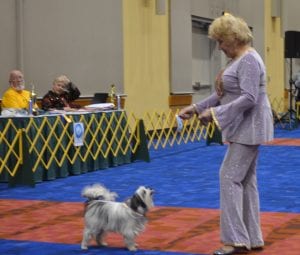 Patie Ventre, the Ginger Rogers of the Dog World. Auslander loved bringing events like Freestyle to the dog shows. “It has to be fun,” he said

“I personally believe all dogs are perfect – but the Whippet is the most perfect of all,” he said. “People don’t even know what they are. They can run around and play with the best of them, but they’re also snugglers. And a great size for an apartment.”

For years Auslander was among the most sought after of all dog show judges. He once confided, “That was tough, all those years of traveling as a judge, 60 to 70 shows a year. Then, after that, all those years of committing so much time to the AKC. Thank God for Seme. And God only knows what kind of father my children think I was.”

By all accounts he was a pretty darn good. Auslander had three children, seven grandchildren and 10 great grandchildren.

Auslander earned many honors and awards in his distinguished career. The AKC Canine Health Foundation presented him with their Man of the Year Award in 2000.

Heart the Size of Lassie 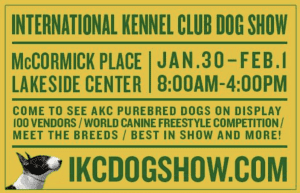 Auslander loved judging junior handling and was always encouraging to any newcomer to the show dogs. On one occasion, Auslander announced to a young participant, “It’s time for me to check the teeth.” The little girl responded with a wide grin and promptly opened her mouth.  “I almost didn’t have the heart to explain that I meant I wanted to inspect the dog’s teeth,” he said and laughed.

“On another occasion. I asked the kid to get ready to show. Small dogs are judged on a table. And this little girl was trying desperately to get her-full grown St. Bernard on this little table. That was quite a sight. The St. Bernard was twice the girl’s size.”

Yes, Auslander could be gruff but he had the heart of the dogs he so devoted so much. Later in life, he served on the Board Directors of the Peggy Adams Animal Rescue League in West Palm Beach.

I once introduced Mr. Auslander at an event. And I had the opportunity to tell him that he contributed to opening my world to dogs. I know I am hardly alone – and he took great pride is seeing the joy dog brought to others.

Watching Auslander judge a dog was like watching a great artist. Every touch, every pat on the side or front of the dog was like a brush stroke. He carried the authority of a judge, yet you couldn’t wipe the smile off his face if you tried. Clearly, he loved this job and loved dogs.

I once asked him about his greatest contribution to the dog world, he replied. “I don’t know, maybe watching a family adopt a dog or a family walking away from the dog show saying, “That was a great time.”