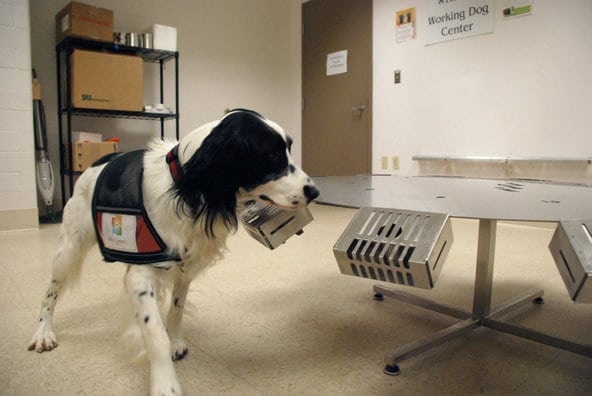 We know dogs can detect cancers and be trained to find explosives, and now scientists n the UK are training dogs to sniff out COVID-19.  Dogs can detect malaria and diabetic crashes.

Dogs naturally detect some of these changes. An obstetrician can tell you that dogs (sometimes cats too) might even preempt those pregnancy tests that turn pink or blue.

Charity Medical Detection Dogs, based in Milton Keynes, is working with the London School of Hygiene and Tropical Medicine and Durham University on the project. According to the school’s release, Professor James Logan, head of the Department of Disease Control at LSHTM and Director of Arthropod Control Product Test Centre, says: “Our previous work demonstrated that dogs can detect odours from humans with a malaria infection with extremely high accuracy – above the World Health Organization standards for a diagnostic.”

Researchers suggest the trained canines could supplement existing screening methods, triaging as many as 250 people an hour. Also, dogs may be used at airports, similar to how the U.S. Department of Agriculture currently uses Beagles.

However, the idea of dogs detecting cancers isn’t that dogs will be exam rooms around the nation (though that would be nice), it’s that their abilities have begun to allow chemists and other scientists to create an efficient early blood test. That’s being done right now, for example, for ovarian cancer.

Dr. Cynthia Otto at Penn Vet Working Dog Center is succeeding at training dogs to detect ovarian cancer. So far, the dogs are 99 percent accurate, more accurate than any current testing for ovarian cancers (or most cancer), and able to detect more definitively, which will make FAR earlier diagnosis possible. Ultimately, based on exactly what the dogs are identifying chemists will create a blood test. This entire program is being supported by the Ovarian Cancer Symptom Awareness Darlene Arden Veterinary Outreach Program.

If you’re concerned about the safety of the dogs – it seems clear that dogs aren’t going to get sick from COVID-19. There have been two dogs identified in Hong Kong with a “weak positive” for the virus, but neither dog became ill. And if even infected, the dogs weren’t infectious. Testing thousands of dogs and cats for COVID-19, the diagnostic lab IDEXX says they didn’t come up with a single positive.

(credit to Dr. Natalie Marks for informing me of this story)