Let’s celebrate canine Labor Day – you won’t believe some of the unusual jobs dogs can do or are being trained to do:

1.Before her death, journalist and pet book author Darlene Arden set up the Ovarian Cancer Symptom Awareness Darlene Arden Veterinary Outreach Program to support funds to teach dogs to sniff for ovarian cancer. Contributions continue to further transformational research as dogs are now being successfully trained at Penn Vet Working Dog Center to sniff for this cancer, and in the early stages of the disease! This is huge, and far, far better than current diagnostics. 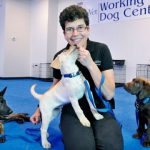 Researcher Dr. Cynthia Otto, director of the Penn Vet Working Dog Center says her trained dogs are hugely successful at sniffing out cancers. Once the chemicals are identified, this may well lead to a blood test for ovarian cancer and potentially other cancers.

Right now, ovarian cancer is one of several challenging to diagnose cancers because symptoms are silent at the start, and by the time diagnosed the cancer has progressed to stage 3 or 4 where treatment success isn’t as common. By Dr. Otto training dogs to detect the chemical changes that occur very early, she’s confident a blood test will happen to identify those changes. And if (not when) that happens, lives are saved. Consider supporting the Ovarian Cancer Symptom Awareness Darlene Arden Veterinary Outreach Program.

It’s one thing for dogs to detect cancer early among family members; it happens all the time. It’s another for trained dogs to detect the early chemical changes, and then chemist to create a test based on these changes. And that is what’s happening now.

2. Dr. Cynthia Otto is nothing but busy. After she heard about researchers in the UK began to train dogs to sniff out COVID-19, the illness people are getting caused by the novel corona virus, she began to do the same at the Penn Vet Working Dog Center.

I spoke to Dr. Otto on WGN Radio about her training techniques and goals. Dr. Otto is succeeding. Dogs can detect COVID-19, as they can detect specific cancers. Now, what do you do with those skilled dogs? It’s likely that at some point dogs will randomly sniff people as they enter the U.S. at international terminals, similar to how today the United States Department of Agriculture and U.S Department of Customs and Border Protection Beagle Brigade sniffing for illicit drugs and fruits and vegetables illegally brought into America.


3. Tucker has a particularly unique job; he an Orca scat detection dog. He sniffs out whale poop. In fact, Tucker is the most important member of the crew searching for killer whale poop because he is the one scientists depend on to find the Orca feces up to a mile away. Killer whales in Puget Sound were placed on the endangered species list in 2005 and they are not recovering. A team of researchers is trying to find out why by studying their poop or what they consider “scientific gold.” From the poop, researchers can discern if disease is impacted the killer whales, and even detect individual DNA. Tucker’s official job title is scat-detection dog.


4, Bed Bug sniffing dogs can now be certified as “professionals” by the National Entomology Scent Detection Canine Association or NESDCA, formed by Pest Control Professionals to ensure the highest standards for Entomology Scent Detection Canines are upheld. There are even two official bed bug detection training facilities. Dogs are trained to sniff out bedbugs, termites and/or rodents. A part of the mission is to educate consumers about the benefits of using properly trained entomology scent detecting dog teams in the process of locating, and eradicating pest problems.Or the best idea, avoid hiring one of these dog teams by managing to avoid bed bugs in the first place.

5. Dog can be harvesters of valuable truffles. Like any other job some dogs are better at this job than others. So, now there’s even a competition for the best, The North American Truffle Dog Championship. There are dog trainers and even training facilities that specialize in teaching dogs fungus finding in the woods.


6. The kea is a critically endangered flightless parrot species only found only on New Zealand’s South Island. And researchers need to keep tabs on how many there and where they area. Ajax is the nation’s official and the world’s only Kea finder.  This dog is quite amazing, discovering where the birds are hiding, going into places which aren’t easily accessible and without freaking the birds out.


Of course, that’s not to mention dogs that serve roles which include but aren’t limited to detecting diabetic spikes and crashes, seizure detecting dogs, hearing dogs, mobility dogs, dogs which discover narcotics and explosives for the military and law enforcement and dogs that detect landmines. There are even dogs who serve as lifeguards in Italy.


And then there’s this —- and Boomer isn’t the first dog to serve as a Mayor in a U.S. town. Small towns in California, Minnesota, Colorado, Kentucky, as well as San Francisco have all had canine mayors.