Ethel: We Loved You 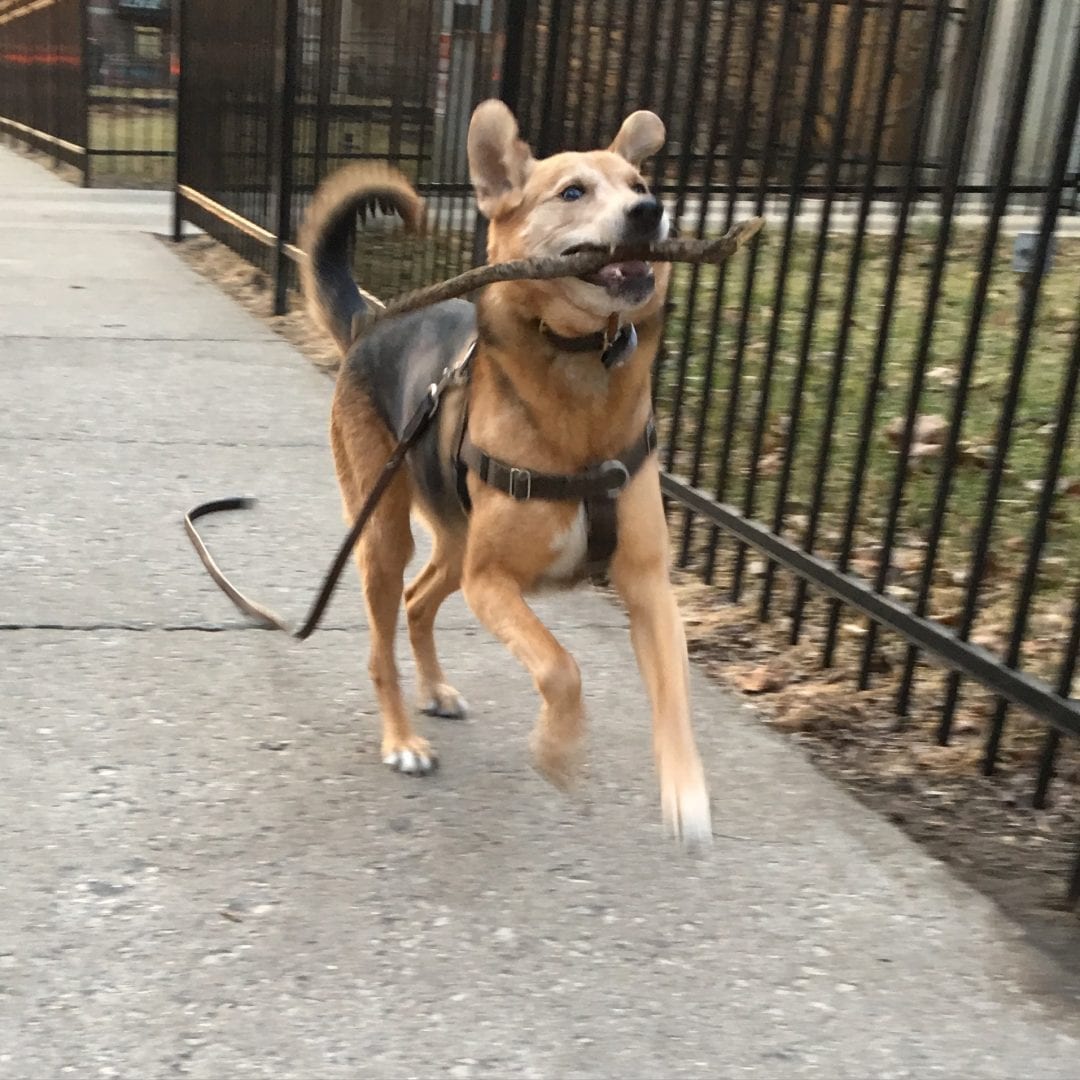 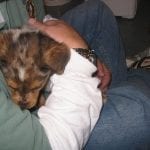 Our first meeting at Chicago Animal Care and Control

Ethel came into our lives 13 years ago. We loved her all we could. She loved us back ten-fold.  She expressed her love nearly every waking moment of every day. And that love wasn’t only expressed with a wag of a tail or smiles, she said so in her eyes. Indeed, that love was unconditional. 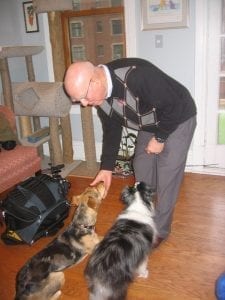 Legendary veterinary behaviorist Dr. R.K. Anderson made a house-call all the way from Minnesota

It was 13 years ago, and we had recently lost a dog, when a friend at Chicago Animal Care and Control contacted me that an Australian Shepherd litter was just dumped at the door. Even as a puppy it was her expressive blue eyes, and her unique coloring that attracted us most – and we instantly adopted her.

As a puppy, she was, in truth, nasty – picking on her older “sister,” a mini-Aussie named Lucy, who was then in her early teens. Ethel was such a “pill” when she was very young, legendary veterinary behaviorist Dr. R.K. Anderson came to the rescue. 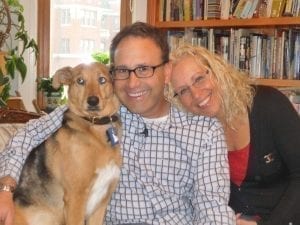 Ethel with me and Robin, and those Ethel eyes

Though it was soon pretty clear  that she was no Australian Shepherd, Ethel was so distinctive looking that I was asked every day, “What designer breed is she?” I finally made up a story about her lineage. That story went viral at the time.

When Hazel came into our lives, from the Animal Welfare League of Chicago, Ethel welcomed her. And the two were instantly inseparable. Images of the two cuddling have actually prompted some to say I must be photoshopping, but none were. 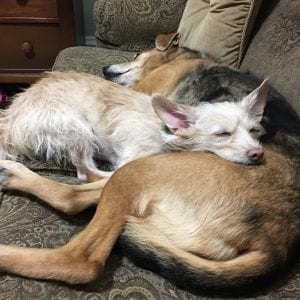 At times, it’s as if they were glued together

My favorite thing to do with Ethel was to simply walk. We went on countless long walks together. Often she would help determine to the route, insisting on turning left or right at certain corners. Always, she’d remember any business which offered cookies. And boy did she remember. One store gave her a cookie one time – just once. And then went out of business…For several years, she’d hit the brakes in front of that door – which was now a completely different business that doesn’t offer dog cookies. I think her favorite thing to do wasn’t only to walk with me, but to direct the route to places where there were cookies.

Ethel was most known by others for the Instagram hashtag, #stickoftheday. Hundreds of people have written or commented in social media about how those images have made them smile. I couldn’t possibly count all the smiles plastered on faces as people walked by our stick carrying dog carrying.

Firefighters would smile or laugh as they passed by because Ethel was so good at howling at the passing fire trucks. Hazel tried  to imitate, but never quite do it. 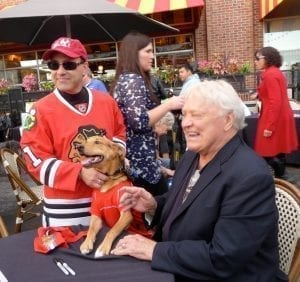 Among the celebrities Ethel has met, the Golden Jet, Bobby Hull. And she’s appeared in dozens of TV shoots with me.

Ethel loved everyone – even more so in her later years.  She would drag us down the street to meet someone who she never met before. She’d stop at a bus stop and demand to say “hi” to all of those waiting for a bus who sometimes didn’t much care to say “hi” back. Once she even began to climb into someone’s car before I caught her (as there were groceries in sniffing distance). Still like most dogs she had her favorite people, who included my brother-in-law, her veterinarian Dr. Natalie Marks, and pretty much grew up with a little girl who lived in our building – and the two of them had a relationship that was amazing to witness. 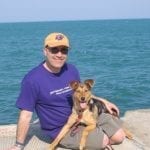 Ethel would sometimes sit so close to some people or to me or my wife as if she could get inside them she would. And those expressions Her eyes remained blue her entire life, and always told a story.

The good news is that she didn’t suffer very long – no prolonged illness. The bad news is that my wife Robin and I had no time to prepare.

We weren’t ready – for one thing, so many more sticks to pick up. 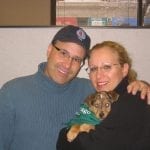 We loved you. SO MUCH 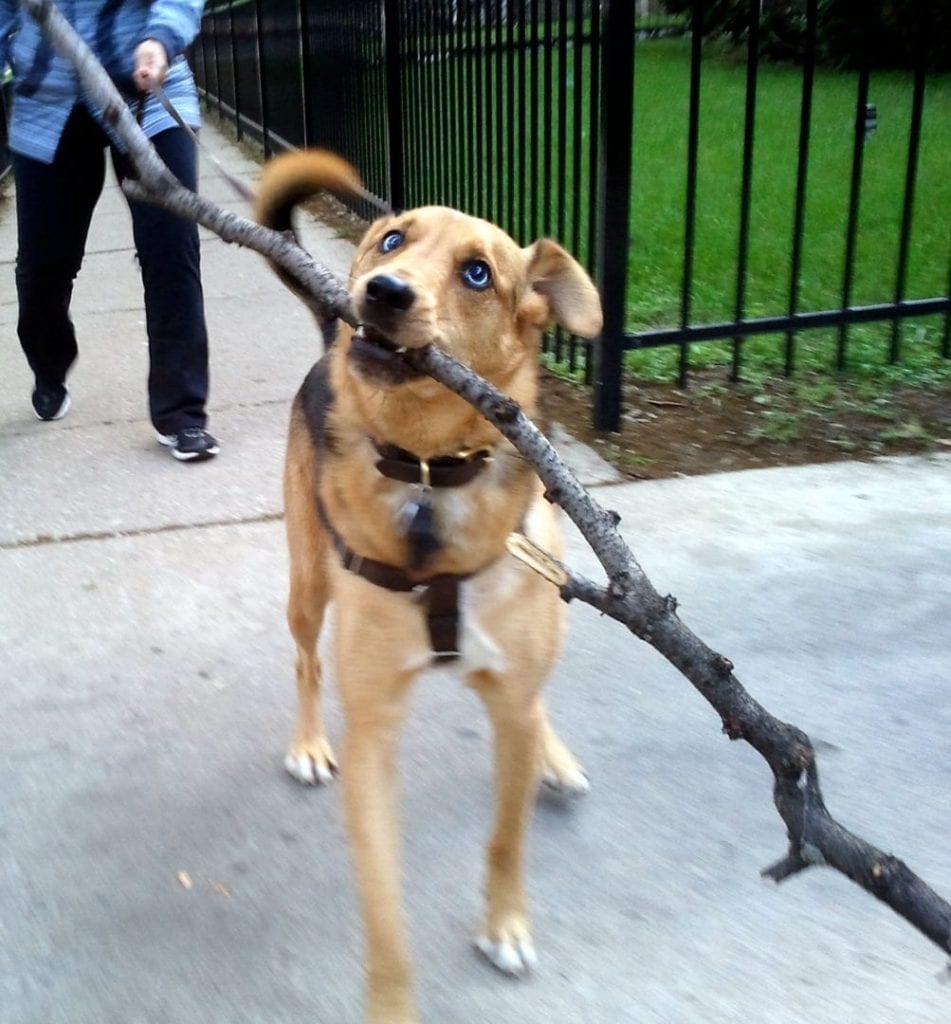