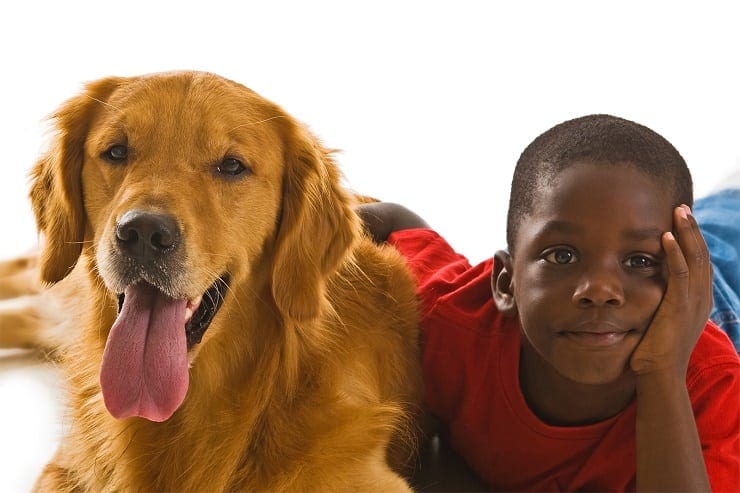 The Food and Drug Administration Center for Veterinary Medicine has just issued a complete report, results of their studies, collaborating with experts outside the U.S. Government , regarding an increase in a serious heart disease called dilated cardiomyopathy (DCM) in dogs that has been directly related to dog foods.

Certain pet foods, many labeled as “grain-free,” which contain a high proportion of peas, lentils, other legume seeds (pulses), and/or potatoes in various forms (whole, flour, protein, etc.) as main ingredients (listed within the first 10 ingredients in the ingredient list, before vitamins and minerals), are most associated. Many of these case reports included dog breeds not previously known to have a genetic predisposition DCM.

Cutting to the Chase – What Foods and Ingredients Are Most Implicated 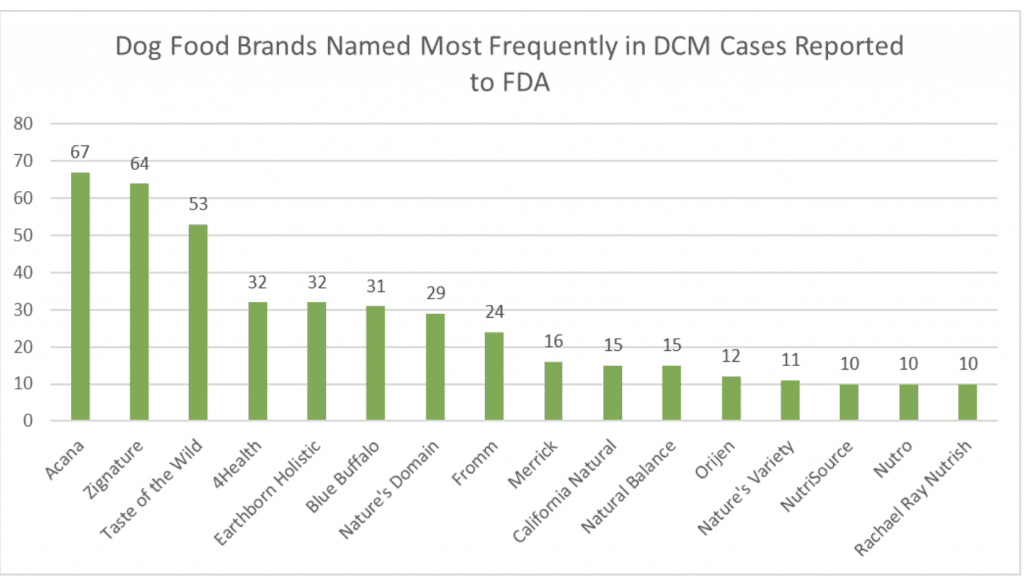 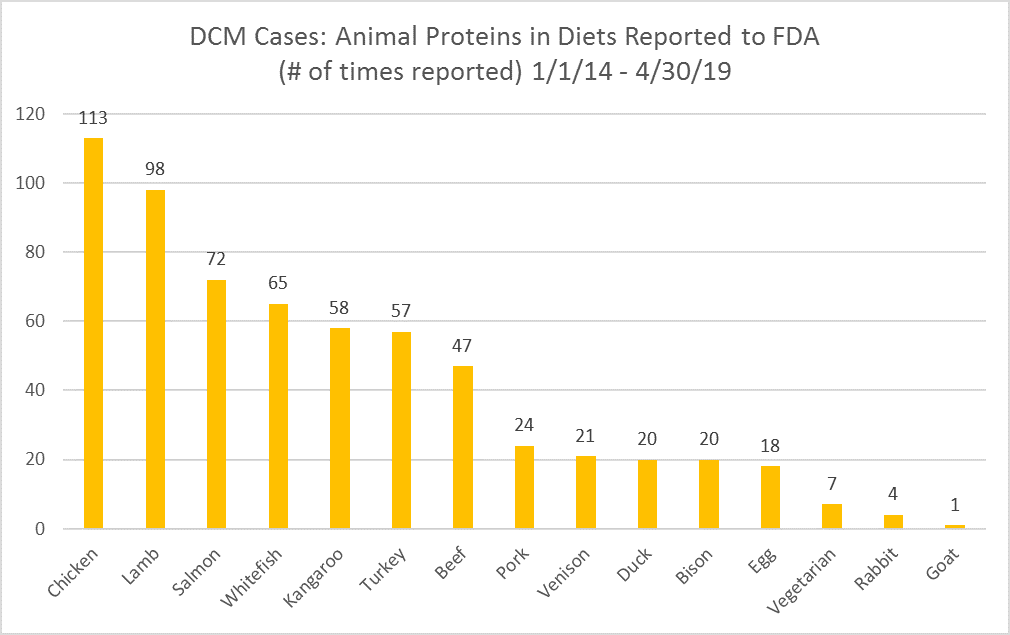 Nutritional research indicates that taurine is generally not considered an essential amino acid for dogs, because dogs (like people) can synthesize taurine from cysteine and methionine. Nearly all the grain-free products had methionine-cystine values above the minimum nutritional requirement of 0.65 percent for adult maintenance food for dogs published in the AAFCO Official Publication (OP). As a side-note, cats cannot manufacture their own taurine.

The FDA says continue gather information to better understand if (and how) taurine metabolism (both absorption and excretion) may have a role in these reports of DCM.

However, past publications and research suggest that Golden Retrievers, in particular, and perhaps true Golden mixes may be genetically predisposed to taurine deficiency, which is well-documented as potentially leading to DCM.

Veterinary cardiologist Dr. Joshua Stern from the University of California at Davis has been studying the rise in cases of DCM in Golden Retrievers, including a potential dietary link. Many cases of DCM in Golden Retrievers are taurine-deficient. Pet owners who suspect their Golden Retrievers may be affected may wish to consult their veterinarian to discuss checking taurine levels or conducting an echocardiogram. This is the first time the FDA has made such a strong recommendation. No indication, though, what the FDA suggest is a Golden or Golden-mix is not on one of the implicated diets, so do speak with your veterinarian. 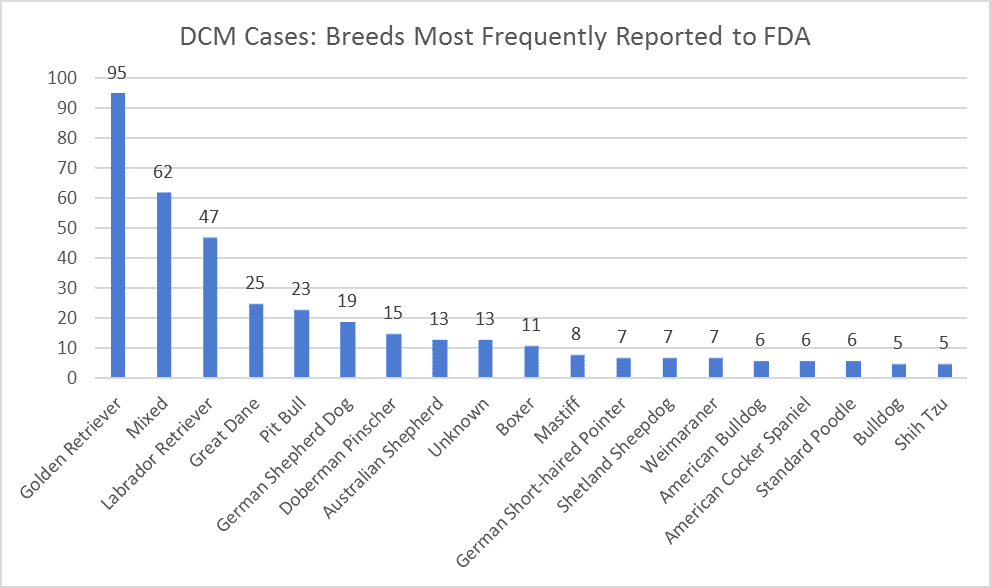 Dilated cardiomyopathy is recognized as a genetic condition in dogs, typically in large or giant breeds, such as the Doberman Pinscher, Great Dane, or the Irish Wolfhound. It is also seen in Cocker Spaniels, typically associated with taurine deficiency. It is believed to be less common in small and medium breed dogs.

The FDA says that they suspect that cases are underreported because animals are typically treated symptomatically, and diagnostic testing and treatment can be complex and costly to owners. FDA has observed a reporting bias for breeds like Golden Retrievers due to breed-specific social media groups and activities that have raised awareness of the issue in these communities and urged owners and vets to submit reports to FDA.

So, absolutely, there is greater concern regarding Golden Retrievers. However, no one knows real specifics of all this because, as noted, some case – and no one knows how many – go undiagnosed and/or unreported. Also, breeds, in general, can be misidentified.

If a dog is showing possible signs of DCM or other heart conditions, including decreased energy, cough, difficulty breathing and episodes of collapse, contact your veterinarian as soon as possible. If the symptoms are severe and your veterinarian is not available, you may need to seek emergency veterinary care. Your veterinarian may ask you for a thorough dietary history, all the foods (including treats) the dog has eaten.