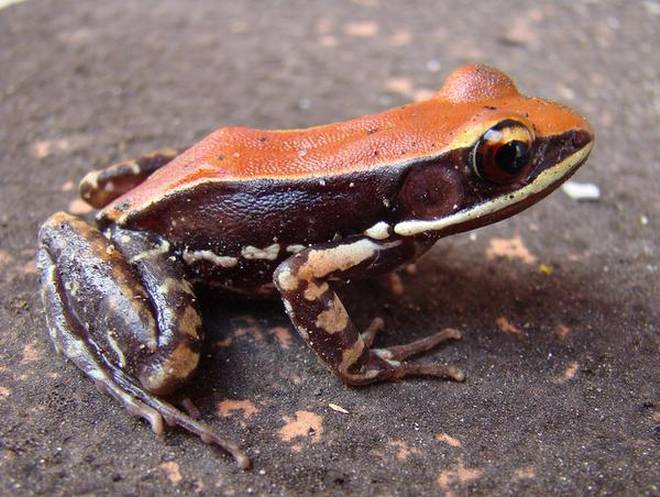 Antibiotics have been successful, so much so that people want them even when they have a viral infection. Of course, bacterial killers don’t touch viruses. And anti-viral drugs haven’t proven to be so great. So, let’s try frog mucous.

At one time, it was thought putting a frog into a bucket of milk might prevent it from going sour. Of course, fairly tales are filled with stories of touching a frog or kissing a frog. Likely, it all harkens back to what cultures have known for eons about at least some frogs and the anti-viral properties of their skin.

Today, researchers discovered that a colorful tennis ball-size frog from India, Hydrophylax bahuvistara, produces a compound in its skin mucus that can neutralize numerous strains of H1 influenza viruses, which are known to infect humans and other animals. As a result, the compound—a host defense peptide described in the journal Immunity—could lead to a future influenza vaccine and/or drug treatment.

The mucous of this species of frog skin contains four peptides that can potentially neutralize viruses affecting people (and conceivably dogs). There’s only one slight hitch: Three of these peptides are also toxic to humans.

However, the fourth could be a winner.

Researchers named the flu-fighting peptide “urumin” after the urumi, which is a sword with a flexible blade that snaps and bends like a whip. The weapon comes from the same Indian province, Kerala, as the frog.

If a vaccine isn’t developed from the frog skin peptide, perhaps physicians will write the following instructions for people (or dogs) with flu: “Kiss a frog.”

More research is needed to determine if urumin could become a preventive treatment against the flu in humans, and to see if other frog-derived peptides could protect against viruses like dengue and zika.

What really is noteworthy here is that I am frequently asked, why save endangered animals? Other than it being the obvious ethically right thing to do, any one species of insect, amphibian, reptile, bird, fish, or mammal impacts many other species in the environment. And yet another reason is illustrated right here; you never know when a species may help us.