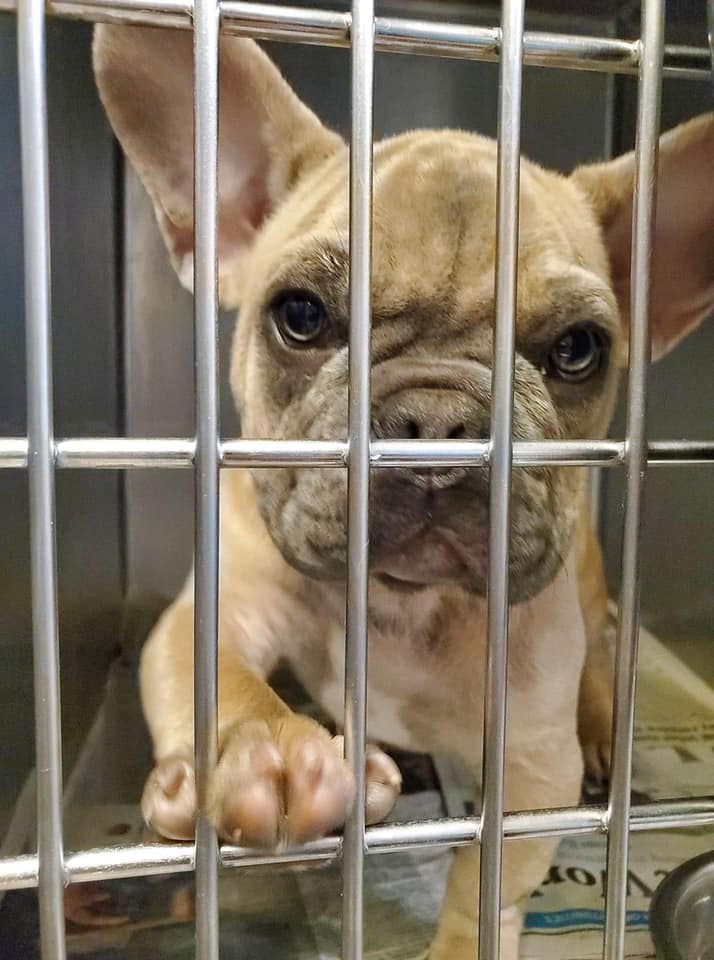 Entering the U.S. without proper paperwork from Royal Jordanian Airlines, U.S. authorities – for whatever the reason didn’t immediately turn the dogs back where they came from. Instead, 15 French Bulldogs (and a few other dogs) were hidden away – and without food and water or the opportunity to go to the bathroom outside their kennels. The dogs were  accidentally discovered by the passing truck driver making a delivery, after alerting Chicago Police, Chicago French Bulldog Rescue was called in.

Mary Scheffke, director of Chicago French Bulldog Rescue and volunteers, transported the dogs for needed veterinary care and to be quarantined.

Meanwhile, it was learned that the dogs were flown in from Jordan but originated from Russia, as a part of amounts to a complex illegal transfer of animals. Presumably the dogs would be resold (or flipped) for several times what the original payment was to purchase.  Obviously, there’s much wrong-doing here – but none from the innocent animals.  After insisting the animal be returned, finally the CDC relented and offered amnesty.

The community response, and response of the media I suspect made a big difference, putting pressure on the CDC. The press release follows:

Chicago French Bulldog Rescue is ecstatic to announce that the 15 French bulldog puppies who were rescued from Chicago’s O’Hare airport in August are safe and will now be allowed to stay in the United States permanently.  Chicago French Bulldog Rescue, through its counsel is working out the final details of an agreement it has reached with the airline and Centers for Disease Control. The CFBR is granted full custody and ownership of the puppies who will be quarantined over the next few weeks in compliance with CDC requirements and under the supervision of the IL Department of Agriculture and State Veterinarian.

Pursuant to the terms of the tentative agreement, after the quarantine period, the dogs will be placed by CFBR into foster homes where they will receive further care, treatment and training before they are available for adoption.  Importantly, to secure full custody and ownership of these dogs it is necessary for Chicago French Bulldog rescue to assume all of the costs and liabilities associated with the puppies’ past and future care.  To make a donation to these costs, please visit our website at: https://www.frenchieporvous.org

“Saving these puppies lives was only achieved through acts both small and large of literally over one hundred thousand people”, say Mary Scheffke, Director of Chicago French Bulldog Rescue, “We now must harness the momentum to fix the broken system and create permanent change.”

While CFBR may be responsible for starting and leading this campaign and the party responsible for negotiating the agreement, it was only possible as would stood upon the shoulders of Congressman Mike Quigley and his staff, who fought tirelessly and with sincere passion for these dogs and who is committed to effecting real change.  Upon the shoulders of Senator Tammy Duckworth and her staff, who shared our anger and resolve and advocated on our behalf to push the parties involved to do what was right.  And upon the shoulders of PAWS Chicago, our unwavering partner.