A Good Day for Puppy Mills 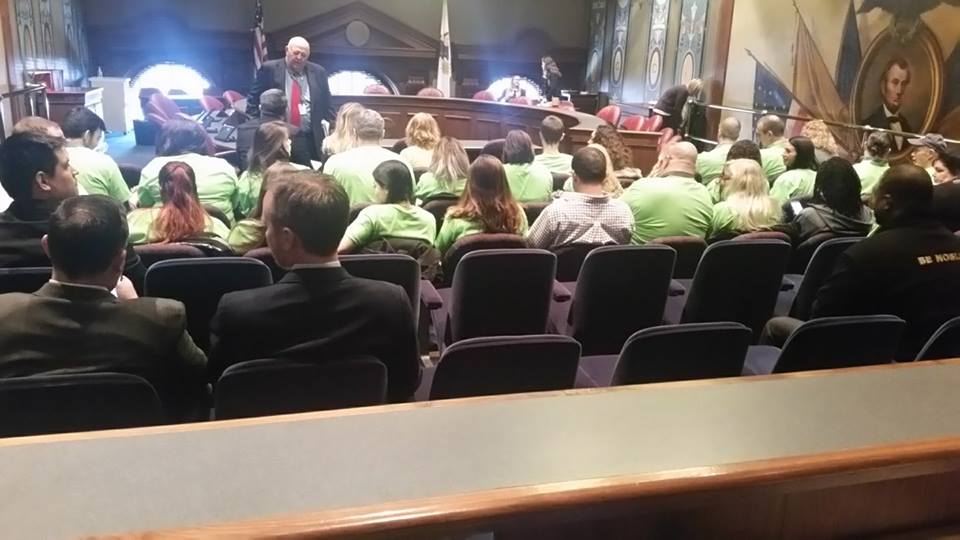 In a packed Springfield hearing room today (March 15) in the capital filled with green t-shirt supporters saying “Safe Pets Vote Yes” for SB1882. Unfortunately, this bill ultimately supports puppy mills – and somehow made it out of committee.

I know politics often isn’t neat – but this is a mess.

You read this right in Illinois on March 15 – a bill supporting sales of animals from puppy mills actually had support.

With so many animal welfare groups (literally about each animal welfare and rescue group in the state) strongly opposing this bill, as well as the National Association of Veterinary Technicians in America, Puppy Mill Project, Humane Society of United States, Best Friends Animal Society  and Veterinary Professionals in America. you’d think the Committee would pay attention.

That’s not to mention the lop-sided number of 1,260 petitioned opponents to 156 proponents, and many constituent phone calls.

The bill also would abolish ordinances already passed in Chicago, Waukegan, Warrenville and Cook County that prevent pet stores from selling dogs and cats (and rabbits in places as well). These ordinances were passed and supported by the Puppy Mill Project and many animal welfare groups because of where the animals sold at pet stores are sourced from. No responsible breeder EVER sells to a pet store. EVER.

If the pet stores are not purchasing from responsible breeders – where are they getting the pets from? Can you say puppy mills? Isn’t that getting to be common knowledge?

What’s more, the proposed bill suggests consumers are protected by requesting inspection reports of where animals are sourced. The problem is the animals are usually sourced out of state, so that means the only place for such information is the United States Department of Agriculture, which unfortunately is no longer transparent with this information. Interested parties would have to file of Freedom of Information Act request, which may take months or longer to be acted upon to procure inspection reports, or even confirm where the pet store says an animal is from is the truth.

So, yes, microchip our pets – but they shouldn’t be sold at pet stores. Also, unlike responsible breeders, who are discerning about who will buy their pets – clearly pet stores ask only one question: “Will that be cash or charge?”

And this bill is – as the Chicago Tribune has written –  is an end-around to allow puppy mills to feely sell animals.

Has Illinois totally become the Land of Lunacy? How could any conscientious  Senator support such a bill?

Puppy mill issues aside – any local community that has made their own decisions about what retailers can sell or not – would now be negated. What’s the point then of local government? I hope and expect Chicago aldermen and Cook County commissioners to say “Wait!”

The group behind this puppy mill supporting bill is a coalition that interestingly calls itself the Illinois Pet Lover’s Association (IPLA), as if that adoring name will fool people. They’ve apparently, so far, fooled some legislators, who I believe truly feel they signed on to a good bill. No surprise this group includes the pet store industry that supports those mills (the folks with green shirts), the Pet Joint Industry Advisory Council, the Illinois State Veterinary Medical Association (wow – hard to believe a veterinary group could ever be supportive of puppy mills – but they apparently are), and the American Kennel Club (AKC).

The AKC should be embarrassed by These Remarks – explaining their support of the bills.

This has gone too far long – it’s scary. Do you want Illinois stores to freely sell dogs and cats from puppy mills?

There’s a regular crowd who read my columns that are horrified – but I believe most all pet owners would be if they understood what’s going on here. So, spread the word – and speak out! You voice does need to be heard. I do think we’re still in a Democracy.

Without voicing our concerns, money may push this through. And the big money created this bill and is pushing it. I don’t know if the “pet lovers” understand who many lives could have been saved by spending their lobby dollars on saving animals, instead of supporting puppy mills .

Meanwhile the sister bill in the House will likely wait until something happens for not with the Senate bill.