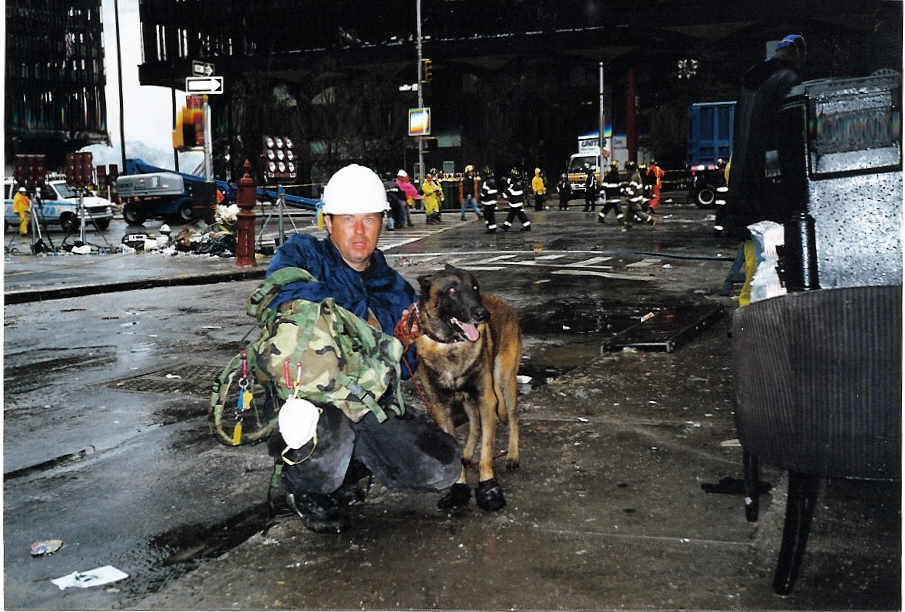 Like most people, I’ll never forget where I was on September 11, 2001.  I was at home watching “The Today Show.” When I realized America had been attacked, my first thought was for my wife. I must have dialed Robin 500 times in two minutes.

At that time, she was working in a high rise across the street from Sear’s Tower (now Willis Tower), a potential target. I was pretty much ordering her to come home, when over the company’s PA system an announcement was made for the employees to leave. 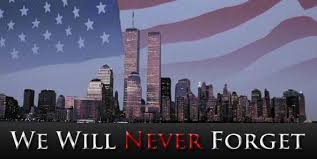 Everyone was leaving downtown – even people who lived there… I remember what a beautiful day it was – maybe that’s why I took the dogs just the couple of blocks to the train station to greet Robin. Somehow, I also didn’t want her to walk home alone. As we headed home and I saw some lingering planes still flying on their way to O’Hare, I actually thought – what if one hits a high rise building near where we live?

We watched the events on TV, horrified and numb. Tears streamed from our eyes. One of our dogs, Lucy, jumped up on the sofa and began to whimper. She had never done that before. And never did it again.

Robin knew people who worked at the World Trade Center, and had sometimes visited them on business. She found out later, some had died that day.

By the next morning, I thought, “I have to do something.”

I contacted FEMA. I’m astonished that I got through, and even more astonished FEMA took my request to speak to search and rescue dog handlers seriously.

While waiting to hear from FEMA, I somehow learned about Chris Christensen, a St. Louis area police officer, who had arrived on the scene before any of the FEMA dogs with his search and rescue dog Sevus, a Belgian Malinois. He drove through the night from St. Louis. I caught up with Chris the first time from the Animal Medical Center. Servus was rushed there by ambulance after an accident.

Chris was in tears, telling me how he thought he’d lose his beloved four-legged friend, who actually once saved his life. The story Chris told me was as dramatic as it gets, and featured in my first newspaper column post 9/11, and later told in Dog World magazine (where editor Beth Adelman did an extraordinary job).

A dog named Riley in a Stokes basket

At this point the handlers and their dogs were desperately and hopefully searching for human survivors. Chris and Servus were scaling a mountain of debris at Ground Zero when the dog lost his footing, and slid nose fist down what must have been several stories. The fine particle debris (a grisly cocktail of building particles to human remains), still burning in places, filled Servus’ nostrils, and the dog could barely breath.

Chris and a local police office flagged down an ambulance, and Servus was rushed to the emergency animal hospital. It took several hours to stabilize him, but he was successfully treated, and soon the pair were about to go back to work when I caught up with Chis, who told me the story.

I later spoke many more times, and even had him live on the radio from Ground Zero.  Odd, I won journalism awards when the real heroes were, of course, Chris and Servus.

FEMA phoned back with cell phone numbers for handlers, both in New York City and in Washington D.C. at the Pentagon. FEMA’s PR person told me the handlers generally refused at first, and didn’t much care about the major newspapers my column appeared  in back then – but they were impressed that I wrote for Dog World. Some apparently had heard of me. 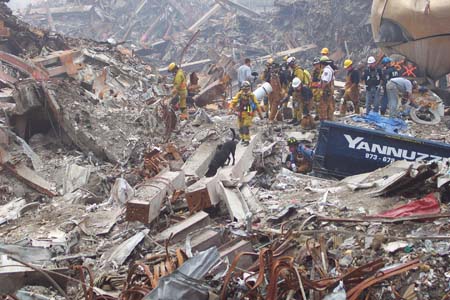 Debra Tosh and her Labrador Abby.

Sometimes I’d literally have to try nearly 50 times, re-dial sure got a workout – but eventually I got through to several search and rescue dog handlers. They spoke to me while working, from the piles of debris once called the World Trade Center, others were in a tent across from the damaged Pentagon. 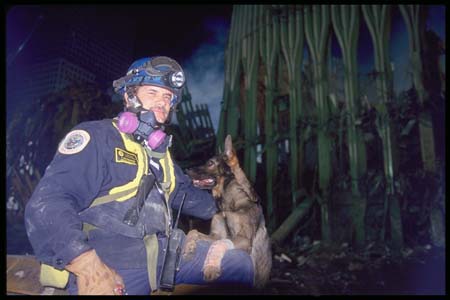 Tony Zintsmaster with Kaiser, who got hurt on the job – but only missed one shift. Tony worked the night shift with Kaiser; while Tony’s wife Annette worked days with Max. (photo by Bob Kaufman)

What they told me, I could never repeat in my newspaper column or even in this space…. That’s just how gory it was. These conversations took an emotional toll on me in Chicago, hundreds of miles away. I can’t imagine the impact of the devastation, the death on the handlers and also on the dogs who were experiencing sensory overload. Never mind, the long-term results of working while inhaling toxic fumes.

I was just rushing to file my stories – first for my syndicated newspaper column. When my editor gasped over the phone, “Steve, how, how did you…I mean how did you get this?” Only then did I realize that I had something no other reporter had. Those print stories of accounts from dog handlers on the scene, which were followed by equally powerful radio interviews – were the first reports in the media to focus on the search and rescue dogs and their handlers.

I’m grateful if in some way my exposure led to further coverage from additional media outlets, which without a doubt led to a new awareness and appreciation of search and rescue dogs, and their handlers. 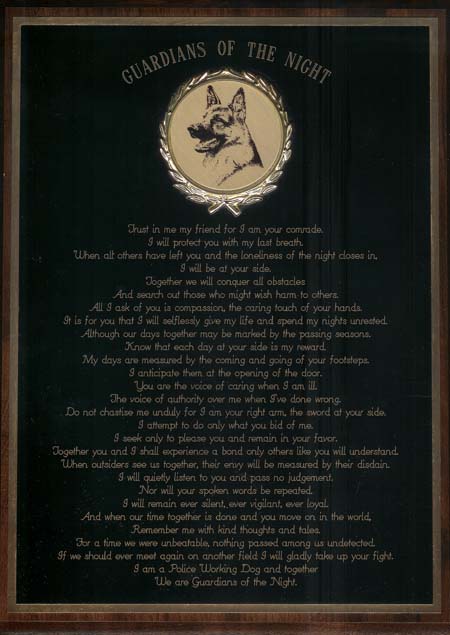 When Servus passed away, Christensen sent this plaque, which I still treasure

A few months later, I traveled to Boston to help honor search and rescue dog handlers at the Tufts Animal Expo.

Forget about millionaire athletes talking trash or abusing drugs, the dogs and handlers are among the real heroes in America.

Interestingly, the majority of search and rescue and cadaver dog handlers are full time first responders or military – which tells you something about them right off. . . They are all about helping others.

I remember and always will remember the victims of 9/11. Robin will remember the names of those she knew. . . But this should not diminish us remembering and even celebrating the triumph of the first responders, including the human/canine teams. Watching them in action – as we did as a nation – illustrates the true definition of teamwork.

Today all the dogs who worked on September 11 are decreased. But their role in American history will never be forgotten.