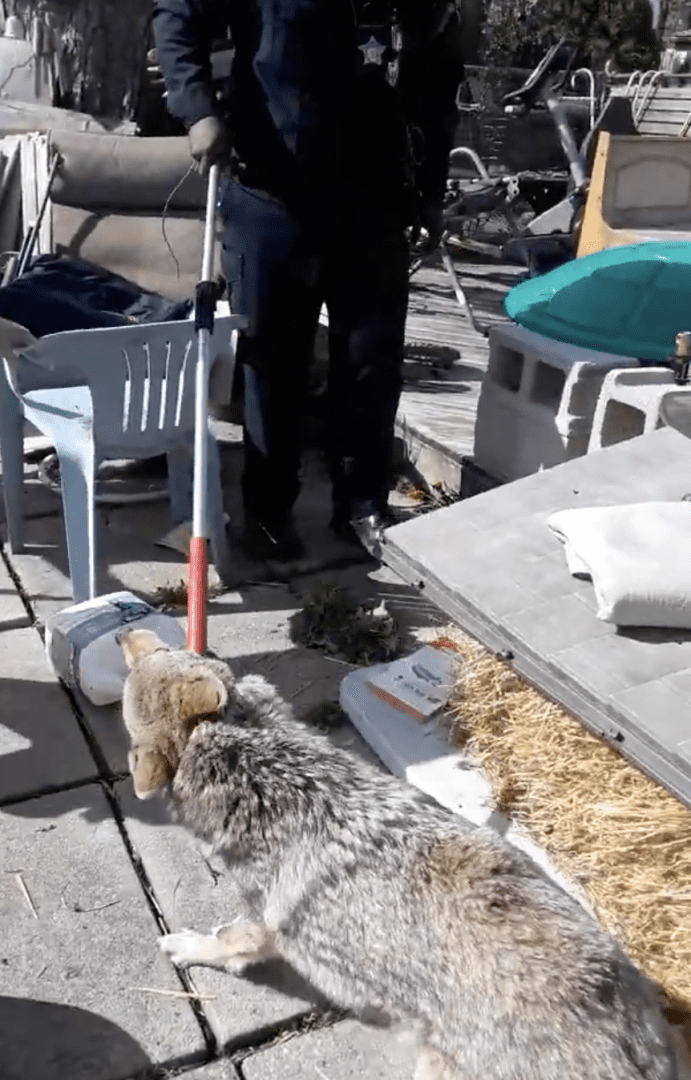 I realize coyotes aren’t pets, and so does Tomi Tranchita, and you can listen HERE to her second appearance on my WGN Radio Steve Dale’s Pet World  to talk about her orphaned coyotes which she’s had care for since they were pups 13-years ago.. They were sick at pups, but Tomi cared for them and they survived. Not being able to released into the wild because they were so accustomed to people, and because there’s no wild really to put them in – she volunteered to transform her large backyard into a coyote playground. And she did so with the appropriate permits, including the USDA exhibitors licensing. She invested well over $10,000 to make it all work. 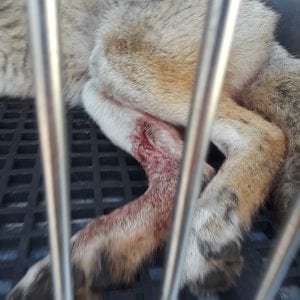 Note: This injury appears, to my eye, appears to be down to the bone. Wrong and cruelly unnecessary

Then, without warning, 13 years later – on April 24, she was woken up with six armed officers from the Illinois Department of Natural Resources (IDNR) and Cook County Animal Control at her door, and they brutally seized her coyotes. And all because she didn’t renew a $25 permit. No chance to renew and no chance to pay a late fee or anything like that.

Her coyotes were trained, like dogs, to go into their crates. but the IDNR lead officer says he was in too much of a hurry to go on vacation. They were terrorized, shot at close range with tranquilizer guns dragged into the awaiting trucks on choke holds and vaccinated (unnecessarily on the spot).  The trauma no doubt contributed or caused death in three of the four. And here’s what happened. The video tells the story:

Now, the IDNR suggested she needed an additional permit later, which isn’t relevant. Truly, that permit is not something Tranchita would get.  Besides others who don’t have permits are given time to get one, not her. Also with authorization from the Federal government to maintain the coyotes as she has been – this still another reason why this never should have occurred.

The three coyotes who died did nothing wrong. Some on that IDNR team, including the lead individual, reportedly joked the only good coyote is a dead one. Guess they were pleased at the outcome.

Meanwhile, all Tomi desperately wants now is the one remaining elderly coyote, named Lua, returned to the only place she’s known has her home. She was her three litter mates when they died, and is now alone except for the brief visits Tranchita is allowed. And IDNR is refusing to do anything about this situation. And now they say it’s because she doesn’t have a permit which isn’t even applicable in the first. How can this government agency continue to get away with this?

How can our tax money continue to support this culture in the IDNR?

I contacted IDNR, but they have no comment. I suspect, what could they say?

Please Take Action to Help: And Spread the World

Sign this petition urging Illinois Governor Pritzker to intervene; stop coyote Luna’s suffering and send her home where she belongs.

Here’s a link to a petition with over 30,000 signatures – please add yours.

HEAR Tranchita in her first interview on WGN Radio describe it all.

One listener said coyotes are the “scourge of the earth.” Well, I bet he doesn’t like bats or snakes or who knows what else. All animals do have a purpose. No matter, while totally not domesticated, these were tame coyotes and they were not bothering anyone. She had the proper permits and was even commended for their care for 13 years. What happened is shameful.