Is Nutrient Enriched Water the Way to Go for Cats? 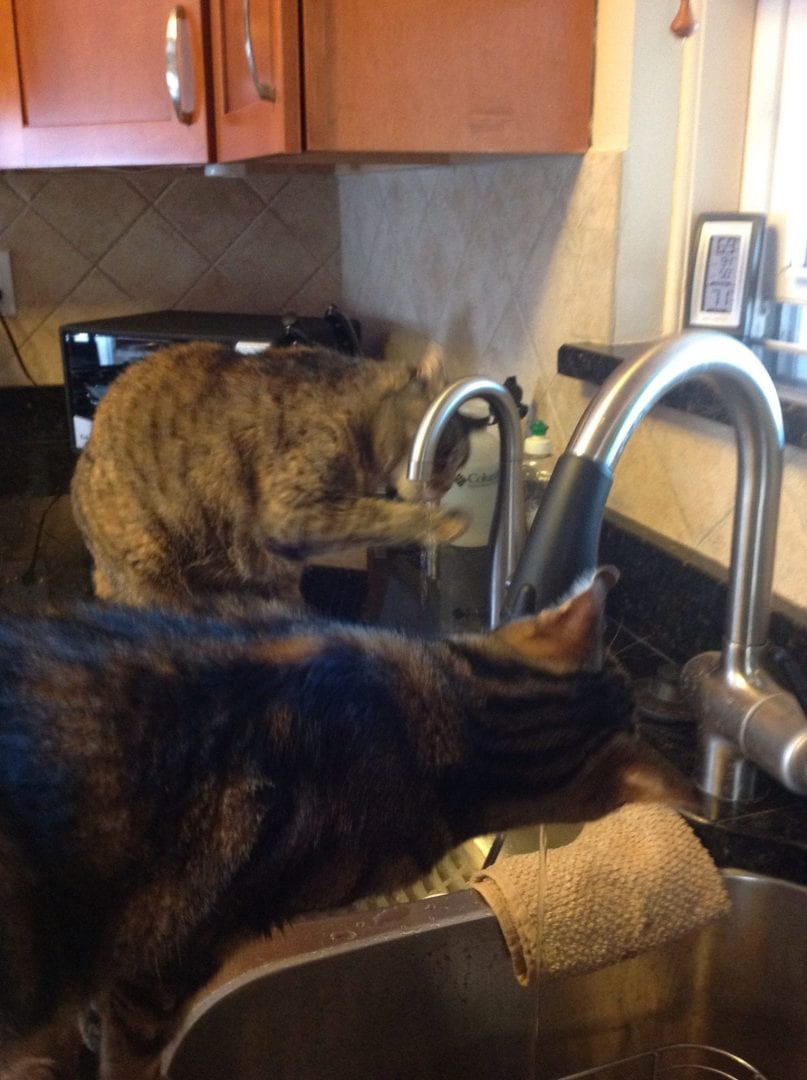 Most cats in America (whether you think it’s a good idea or not) eat kibble. And , in general cats don’t drink enough water some likely silently suffering some effect of at least partial dehydration on a daily basis (there are lots of reasons for this, including many which are behavior related – for example, not providing enough water dishes per cats in the home, or not refreshing the water as only two examples). Researchers at Purina (Brian M. Zanghi PhD; Lynn Gerheart BS; Cari L. Gardner PhD) wondered if nutrient-enriched water (NW) may benefit cats as determined by urine output and also by increasing how much they drink. They studied a group of 18 domestic shorthair cats

Procedure: Half of the cats studies were assigned tap water (TW) and half received NW. No changes were made to the food-water regimen for the TW group. The NW group received NW instead of TW from days 0 through 10, then received TW and NW in separate bowls (days 11 through 56). Food intake was measured through day 10; liquid consumed by drinking was measured throughout the study. Blood and urine samples were collected at predetermined times for analyses; 48-hour urine collection (days 28 through 30 or 31 through 33) was performed to assess output volume and aid endogenous creatinine-based glomerular filtration rate (GFR) determination. Data were analyzed with linear mixed-effects models.

Results: The NW treatment was significantly associated with increased liquid consumption during the treatment phase, this in itself is an important finding. Mean urine output was significantly higher in the NW group (15.2 mL/kg/d) than in the TW group (10.3 mL/kg/d). Mean GFR (1.75 vs 1.87 mL/min/kg, respectively) did not differ between groups. Effects of treatment and time were each significant for urine specific gravity and osmolality and urine creatinine, phosphate, and urea nitrogen concentrations, with lower values for the NW group.

Conclusions and Clinical Relevance: Results suggested that consumption of the NW can increase liquid intake and improve measures of hydration in healthy cats.

Conservatively, researchers indicate, “These effects may offer health benefits to some cats in need of greater water consumption.”

I suggest that the statement from researchers underplays the potential importance of the study. Many cats (even those eating moist food) don’t drink enough. And while cat caretakers doing a better job of meeting the needs of cats would absolutely play a significant role, that education isn’t succeeding overnight. For example, while many cats learn to accept sharing food and water bowls, it’s usually not their preference. Having at least one elevated water bowl that the family dog can’t get to, or little kids don’t play near, is another example. No matter, some cats, even when conditions are ideal, still don’t drink very much.

While the nutrient soup recipe is likely proprietary – it’s also likely that the nutrients themselves are an additional health benefit.

No one knows why the vast majority of cats will suffer some stage of kidney function loss if they live long enough, but perhaps not drinking enough water day after day and year after year could be a factor; no one knows. We do know that water is healthful. And also know many cats so don’t get enough H2O that that could even be suffering from dehydration, however mild (in some cases not so mild). Typically people feel feel poorly who are dehydrated, and sometimes require hospitalization, so could it be these cats feel the same?