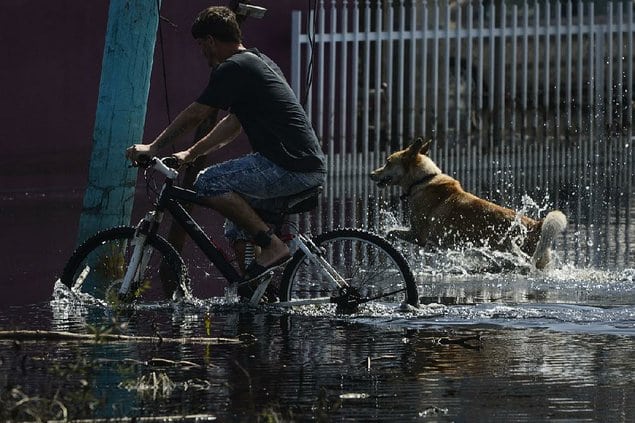 At least four deaths in Hurricane Maria’s aftermath are being investigated as probable cases of leptospirosis, Puerto Rico’s Governor Ricardo Rossello explained Wednesday (October 10) amid concerns about islanders’ exposure to contaminated water. In all, he said 10 people have been diagnosed with leptospirosis. And, there’s little doubt others are suffering in silence, because getting to an open hospital in the countryside may be difficult, and many hospitals aren’t accepting patients.

Pet and stray dogs are part of this story.

Unvaccinated dogs may carry leptospirosis (as do many other species), which is a potentially deadly bacterial disease. Interestingly, some dogs show minimal, if any, symptoms. Other dogs will die without veterinary care. And, just like human hospitals, too many veterinary hospitals either aren’t open for business on the island, or may be difficult to get to because gas is still hard to come by in places. If humans are succumbing to lepto, you can bet dogs are, too.

Leptospirosis occurs when infected animals urinate in water (ponds, streams, puddles, rivers, etc.) and another animal either drinks that water or steps into it. The list of animals that can spread lepto is long, and can include people, cattle, pigs, deer, rodents, and more.

People can get sick by drinking tainted water or wading through infected water and putting their hands in their mouths. In Puerto Rico, some people had no choice but to drink the only water they could access, and many were probably not educated about concerns regarding leptospirosis. And, of course, dogs don’t know better.

As of this writing, at least a third of the residents in the U.S. territory have no running water that is safe to drink.

And, as more people and animals become infected with lepto, the more likely it will spread in the environment.

According to the Associated Press, Jorge Antonio Sanyet Morales, a 61-year-old bus driver, took a drink from a stream near his concrete home on a hillside in Canovanas a week after the September 20 storm. He then developed a fever, his skin turned yellow, and, within a week, he died at a hospital in Carolina, Puerto Rico, said his widow, Maritza Rivera.

The current official death toll resulting from Hurricane Maria in Puerto Rico is at least 45. However, it must be noted that independent news reports by various outlets suggest the death toll is much higher. What is known is that 69 people are still missing in the wake of Hurricane Maria, and parts of the island still haven’t been able to report much of anything because their communications remain down.

According to the Centers for Disease Control (CDC), about 100-200 cases of leptospirosis are reported annually. The first case was reported in 1907 and occurred in Louisiana. The number of annual cases of leptospirosis in the U.S. has fluctuated between 1985 and 1994. In 1985, there were 57 reports, 1990 showed 77 reports, and the number of reports in 1994 declined to about 38. Hawaii harbors about half the cases occurring annually in the U.S. The northeast coast—especially New York—has reported an increase in incidences of leptospirosis. Large cities, such as Chicago and New York City have reported increases, likely due to increased numbers of rats and too many unvaccinated dogs. In 1998, 74 of 369 triathlon participants were infected with the disease in Chicago after prolonged swimming in a lake.

The number of leptospirosis cases in Puerto Rico, before all is said and done, may set some sort of sad record.

So, what can be done?

People need safe water to drink for many reasons, include preventing the transmission of leptospirosis. And, too many U.S. citizens still don’t have that. It’s unheard of.

You can’t vaccinate wildlife, but dogs can be vaccinated. Accomplishing that may be difficult, since many dogs on the island remain unowned and many people may not be able to afford the vaccine or may not be able to get their dogs to a veterinary hospital.

It’s imperative that dogs flown out of Puerto Rico by rescues to be adopted in New York, Miami, or elsewhere are tested for lepto and heartworm.

But, to really address this problem in Puerto Rico now, hospitals—both human and veterinary—need to be able to open their doors.