Steve speaks with Patti Davis about life lessons she’s learned from her cats; about how her mom, Nancy Regan is holding up; and how how Merv Griffin delivered a Shar-Pei to Nancy’s  door as a surprise. Hear Patty on Steve Dale’s Pet World!

“We love them so unconditionally, and our hearts hurt so much when they’re gone,’ says Patti Davis. “I think there’s this sort of subconscious attempt to avoid hurting that much again by avoiding loving that much again.”

She talks as eloquently as she writes. Patti Davis, 53, has written six books, her last was the emotionally riveting and critically acclaimed “The Long Goodbye,” a memoir of her late dad President Ronald Reagan.

The book begins with Aretha. “We were both living in Malibu at the time,” recalls Davis in a telephone conversation. “She wasn’t too happy with her human who wasn’t around very much. And she’d come to visit me. But then one day, she just decided I’d make a better family, I guess. She packed up her little cat suitcases and moved in.”

Davis says she’s always loved animals, but before Aretha her personal experiences had been strictly canine. “I had put my last dog down a couple of years before. I moved from the East Coast to the West Coast, and that was my excuse for not getting another dog. As I said, it just takes some time to get over the hurt. But Aretha didn’t really give me a choice. She was insistent. I don’t think at the time it occurred to me that I needed her as much as she needed more. Probably more.” 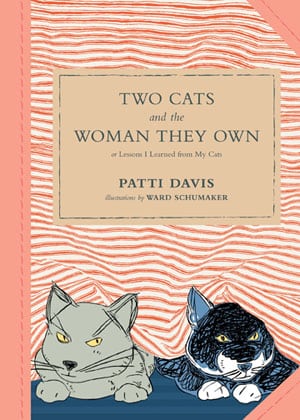 There are a dozen stories or anecdotes in the book, each ends with a little life lesson. “They’re not monumental philosophical lessons, just little things we all know but may have forgotten about,” she says. “And they all came back to me because of my cats reminding about what’s important.”

Shortly after arriving in Davis’ life, Aretha took one of her daily early morning stroll. “I went back to bad after I left her out,” recalls Davis. “When I got up, I found Aretha in the bathroom proudly presenting me with a dead quite ripe large rat! There it was, right on my area rug. I had this very proud cat sitting there giving me a gift, and it was Mother’s Day. I rolled the corpse up inside the area rug; I felt like I was on an episode of ‘The Soprano’s.’ But I really profusely thanked Aretha for her generosity.”

The life lesson learned: “So many times in our lives people give us something, and it’s horrible, really ugly,” she says. “We kind of do that smile, and go thank you very much all while we telegraph how we really feel. Listen, that person didn’t mean to mess up. They really thought you’d like it, just as Aretha really though I’d like the rat.”

Spider was Aretha’s great love. He lived downstairs, and together the couple would hang out every day. One day Spider disappeared. “It was an awful time,” Davis says. “We papered Malibu with flyers, offering rewards and everything. But nothing. Aretha was heartbroken. You can tell she was grieving. I mean, it’s clear, animals grieve.”

The life lesson in her book reads, “You can’t rush grief. It has it’s own timetable. All you can do is make sure there are lots of soft places around – beds, pillows, arms, laps.”

Does the same advice apply to people, including your mom Nancy Reagan?  “Of course,” she says.  “You know she’s still grieving, and going through a process. You can’t rush it. But she’s doing well. She has a very busy life with friends and she’s really working hard on stem cell issues. I think that’s been a really important thing for her, that she has work to do even after my father is gone.”

Davis says she actually began writing “Two Cats” before “The Long Goodbye” was finished. “I pretty much reconciled with her (speaking of the long standing often times unfriendly public discourse with her mother) just before my father’s diagnosis. It was interesting timing there. Oh God, we are definitely closer now than we’ve ever been. I think the experience of an illness in a family can definitely deepen a relationship. It did ours.”

Shortly after “Ronnie” died, Merv Griffin came over one day with a surprise gift, a Chinese Shar-Pei puppy, an idea Patti wasn’t too crazy about. “I was actively looking for a dog for her, I was looking for a small adult lap dog – not a big guy (Shar-Pei’s average about 45 to 60 lbs. as adults). I took the dog to puppy classes for her and all that, but this was a lot of dog for a person in her 80’s. I thought that an odd thing for Merv Griffin to do. Would you just show up at someone’s door with a gift of a dog?”

She doesn’t wait for a reply, and offers her own. “I can’t image doing that with a cat or dog because it has to be the right match, like a marriage. I don’t understand why he did that.”

Of course, Nancy didn’t have to accept, but then she probably read her daughter’s life lesson about accepting gifts. Davis laughs, “What’s too bad is that the whole experience just soured her. I haven’t heard her mention getting another dog.”

Although, Davis did get another cat after Spider’s disappearance.  “It was clear that Aretha needed a friend.” She talks about how Aretha, who once literally would jump vertically into the air – seemingly for pure joy – was no longer, well, happy.

So she went off to a shelter and found a cat, named Skeeter. “Of course, I really did end up with the most dysfunctional cat in the pound.”

That’s another life lesson in her book. “You just have to accept others as they are, and love them for who they are.”

Is that a life lesson most people seem to have forgotten? Davis replies, “Oh yes! If we could do well as accepting one another as animals are at accepted us, we’d be far better off.”