Lil Bub was only 8-years old when she died unexpectedly Sunday. She and Grumpy Cat, who died in May, define the new stars of the Internet, felines. Imagine, getting your obituary in the New York Times. Most people don’t. Here’s Lil Bub’s obit.

According to Lil Bub’s website, she was born with a multitude of genetic anomalies which all added up to one of nature’s happiest accidents. She was a “perma-kitten”, which means she remained kitten sized with kitten-like features her entire life. In humans, she would also be considered to have dwarfism, which means her limbs are disproportionately small relative to the rest of her body and she has some difficulty moving around. She has short, stubby legs and a long, ferret-like body. In some ways, sounds like a Dachshund.

Also, her lower jaw was significantly shorter than her upper jaw, and her teeth never grew in which is why her tongue was always hanging out – an attribute considered cute by most.

Additionally, Bub had extra toes, called a polydactyl cat. Do the math and it added up to 22 toes.

Her website maintains that those big, bulging, wonder-filled green eyes could see into the future. Or maybe she landed here from outer space. 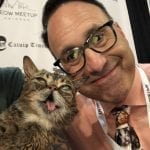 Meeting Lil Bub at the Meow Meet Up, and taking a Bub selfie

“Dearest BUB, I will never forget your generosity, your limitless supply of love, or your uncanny ability to bring so much magic and joy to the world,” her owner, Mike Bridavsky, said on Instagram.

Shortly after turning a year old, Bub was diagnosed with an exceptionally rare bone condition called osteopetrosis. According to Bub’s site, she was the only cat in recorded history to have been born with this disease, which has made it very difficult to treat. The disease caused her bones to progressively grow denser as she grew older, eventually making it hard for her to move around. By the time she was only a year and a half old, she was having great difficulty walking and wasn’t running and was almost completely immobile. Eventually,  a device called the Assisi Loop, which uses Pulsed Electromagnetic Field Therapy, was able to help her. Incidentally, this device is readily available and helps animals in pain, including osteoarthritis.  The Assisi Loop proved to be Bub’s ‘fountain of youth.”

Her image and appearances she made raised many thousands for cat-related charities. In February of 2014, Bub and the ASPCA announced Lil BUB’s Big FUND, a national fund to provide grants to shelters with special needs pets. To date, hundreds of thousands have been raised, as well as  Lil Bub has helped to spread awareness regarding cat adoption and spay/neuter.

Lil Bub’s celebrity expanded beyond the internet into other media. Bridavsky turned the Bub’s likeness into a merchandise line, and Bub was the subject of “Lil Bub & Friendz,” a documentary that made her a celebrity at the Tribeca Film Festival in 2013.