Luna Coyote May be Dying 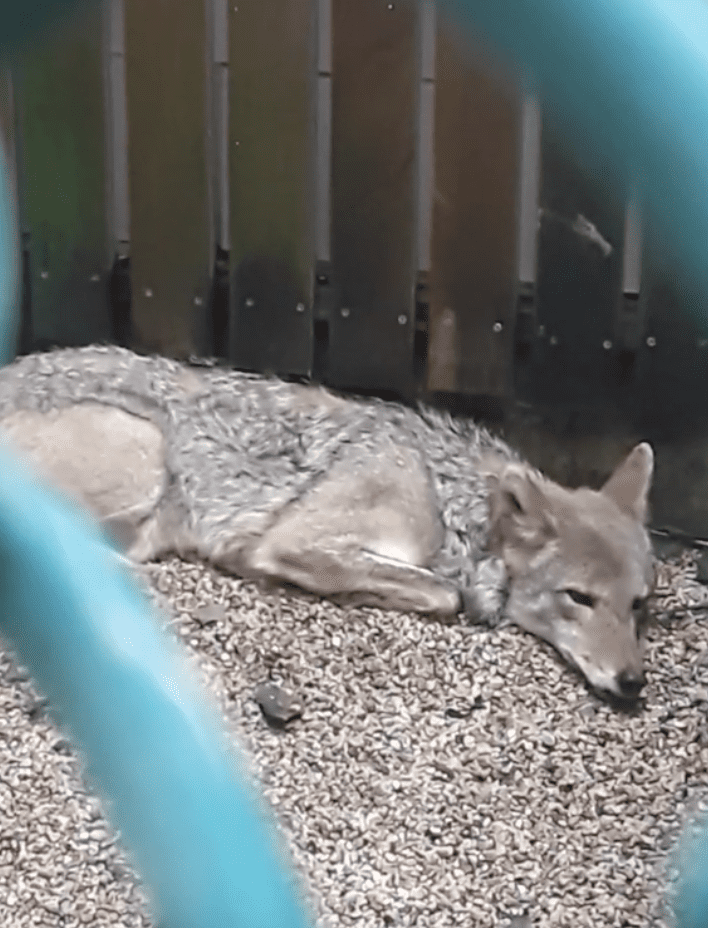 If a Governor can pardon a criminal why not a coyote? And this coyote did nothing wrong. Tomi Tranchita pleaded guilty in court, as a part of a plea bargain….Guilty for not paying a freakin’ $25 license. In exchange, the sole surviving coyote that was brutally removed from her premises by the Illinois Department of Natural Resources (IDNR) will move to a facility in Indiana. That facility will provide other coyotes t o socialize and an appropriate atmosphere, far better than where she is being held currently. Luna, who is 13 years old, is languishing and clearly depressed at her current facility. She may be ill.  Definitely, Luna will be better off in Indiana. But even the executive director of the Indiana sanctuary concedes that Luna would be FAR better off staying with Tranchita because of the bond they’ve formed, it is a familiar place where Luna spent all her life. Luna’s littermates were essentially killed by  IDNR (see below) for what amounted to non-payment of $25.

Please continue to reach out to your local state representative and state senator – and most importantly the Governor’s office.

Governor J.B. Pritzker is understandably hesitant to step in. Having said that, what I happen to know is the Governor’s commitment for Illinois again become the humane state it was under Gov. Pat Quinn. The Prtizker family has an undeniable culture of helping those who need it most, as well in support of wildlife protection. Tell Governor Pritzker how you feel.

Luna can’t wait any longer. Assuming she passes a medical to allow her to be fit for the move (which may not even happen because of the poor condition the elderly coyote is in), she would be relocated Saturday. If the Governor steps in, this must be before Saturday.

The Illinois Department of Natural Resources (IDNR) and others involved clearly don’t care about lives. And, so far, the IDNR seems impervious to public outrage and even questions from public officials. Might this actually take Governor J.B. Pritzker stepping in to save Luna?

There was no reason – except perhaps that animal rescuer Tomi Tranchita failed to renew a $25 license – for the IDNR to confiscate her four coyotes. And they did so in an outrageously brutal way which harkens to they way animals were rounded up in the 1950’s. As a result of the trauma (predictably), three of the coyotes soon died.  Now, the fourth elderly animal appears to by sick, perhaps dying.

For 13 years the coyotes, who Tranchita raised as cubs, thrived. There was never any problem whatsoever with Federal or State licensing. In fact, because she has accredited Federal licensing, the state isn’t supposed to overrule – which the IDNR did.

Her four animals were crate trained. But Tranchita wasn’t allowed to ask them to go into their crates. And had guns point at her, apparently not paying a $25 fine is akin to being a murderer. The lead IDNR officer said that it would take too long (15 to 30 minutes for Tranchita to get the coyotes into crates), and he has to go “on vacation.” Instead they were shot close up with tranquilizers, dragged into awaiting vehicles while being choked and vaccinated necessarily.  And all while joking that the only good coyotes are “dead ones.”

According to veterinary reports, the animals had been in good health. It’s also clear – that even if Tranchita didn’t pay that $25, the animals caused no one any harm. Neighbors didn’t appear to mind; the animals never got outside their enclosure, and Tranchita was actually congratulated by officials for the way she cared for them. And others forgetting to pay the $25 permit have been allowed to simply pay late, but not her.

She had the coyotes in the first place because the sickly cubs were orphaned.  Tranchita offered to attempt to save them, and she did. But imprinted to humans, there was no way to release them back into the woods. and nowhere she could find to take the four litter mates. She she made a home for them in her own yard, spending thousands, complying with all rules and laws. The IDNR gave her no opportunity to pay the $25, and had no warrant.

And now, being forced to come up with another explanation, the government says that Tranchita requires a hound running area permit, which she can’t get anyway because that is for making it possible to hunt coyotes. Now, the IDNR is requiring a permit she can’t receive.  And, incidentally, others keeping coyotes for educational purposes don’t appear to have or need such a permit. Why her? The IDNR needed to come up with something.

Clearly, the IDNR acted inappropriately. Yet, so far, despite various letters from outraged public officials – nothing is happening to send Luna back to the only home she has known, and time may be running out.

Or maybe the IDNR wants Luna to die so the story goes away.

What will it take to return Luna to the only home she has known? Apparently, the IDNR has political power far beyond its mission. What’s next? Can this agency continue to operate under rules made up on the spot? Apparently, the answer is yes.

Even IF Tranchita has does something that is clearly wrong (unsure what that is beyond the $25), the animals never deserved this. Three of the coyotes died. Luna is now clearly suffering. The public cares. Some public officials care. Caring is one thing; action is another. Bringing Luna back home and hopefully allowing her to live out whatever little time she has left appears to be asking too much.

Please Take Action to Help: And Spread the World

Sign this petition urging Illinois Governor Pritzker to intervene; stop coyote Luna’s suffering and send her home where she belongs.

Here’s a link to a petition with over 30,000 signatures – please add yours.

HEAR Tranchita in her first interview on WGN Radio describe it all.