Millennials Have Their Own Views About the Fur Babies 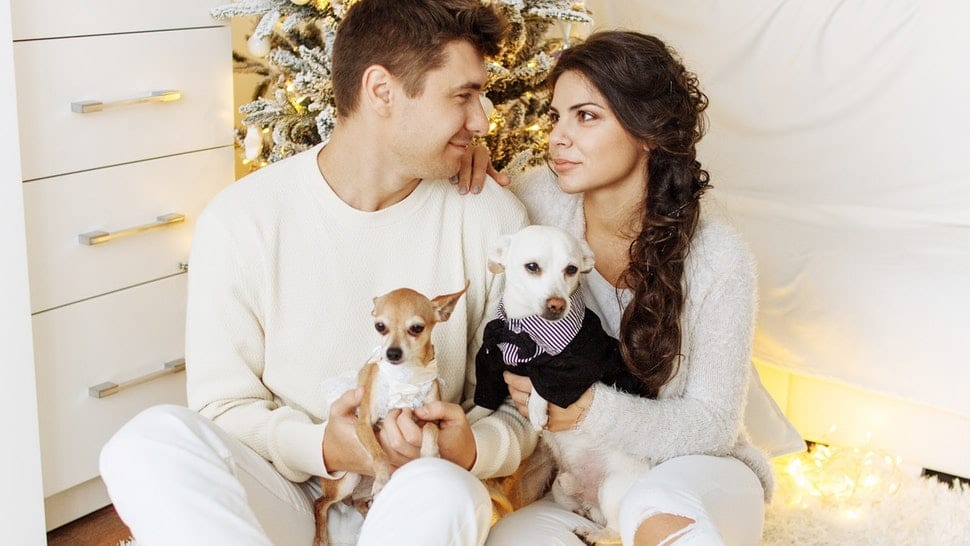 If you don’t believe pets are members of the family, consider these facts. For starters, there are actually more pets than children in the U.S., and the numbers are rising – led by millennials.

Retailers, manufacturers, entrepreneurs and inventors are clamoring to win a leadership position in the U.S. pet economy, with sales projected to exceed a projected $75 billion this year, up from $72.5 billion in 2018 and a doubling of 2005’s $36 billion, according to the American Pet Products Association.

Several forces are driving this engine with the most rocket fuel coming from those millennials, the largest pet-owning age group that is willing to spend what they have, and in some cases spend what they don’t have, according to the a story The Pet Economy Kicks Into Overdrive, and the U.S. Chamber of Commerce.

Need extraordinary pet care? Millennials are most interested compared to any other demographic, and sometimes even beyond what is arguably the best welfare for the animals. For example, when euthanasia is likely right, it’s all pet caretakers – but primarily millennials that may continue treatment anyway.

That human animal bond is that incredibly palpable.  Not only do millennials best understand specialty medicine, but also alternative treatments. They are willing to do whatever they can for their “fur babies.” They are sometimes willing to do what they themselves can’t by setting up a go fundme page.

Millennials also care about, understand and support the emotional well-being of their pets as no other generation ever has. Initiatives, like Fear Free, which supports pets’ emotional well-being and the connectively between emotional health and physiologic health is as real in pets as it is in our ourselves.

Millennials expect to spend more on their dog over the course of its lifetime than they will spend on their own lifetime medical care, according to a TD Ameritrade survey. Further, 79 percent of pet-owning millennial homebuyers would pass up an otherwise perfect home if it didn’t meet the needs of their pets, according to Realtor.com .

Millennials’ clearly care about their own health – check out the health clubs’ growing place in their lives, and those choices now are the same for their pets. A health club for pets? That could be next?  This is all hugely beneficial for pets, as some (including myself) have been talking about the importance of preventive care for many years, and twice annual visits are indeed in the best interest of your dog or cat .Millennials are far more open to this plan, and understand the investment of proactive care pays off for their pets’ health and therefore financially. 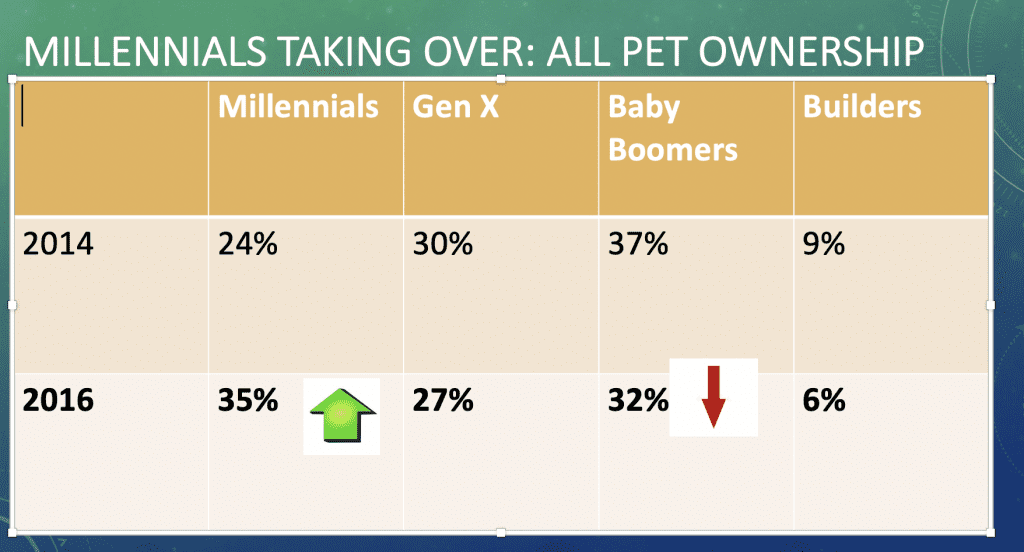 While millennials are pretty savvy consumers for their own goods, they’re sometimes fooled by the marketing and the shear expense of pet foods. They too often perceive that expense equals quality – which is just not true, at least when it comes to pet foods.

They typically maintain they are interested in in the science of pet foods. Unfortunately, there’s one fundamental problem – as many mistake what blogs and social media say in contrast to real science. And once entrenched in a belief – right or wrong – they are committed to that notion about pet foods as if it is a religion, and rigorously defend mistaken beliefs as facts. One example this that major pet food brands use primarily road kill as protein sources. Another is that dogs need to be fed diets identical to wolves.

The millennials do want the food made in the U.S. And they also like words like “conservation” and “sustainability,” arguably even more in pet foods than compared to their own foods.

And, of course, they want pet foods that they know are safe. All pet owners want that – no matter what the demographic happens to be. Still many millennials somehow ignore the U.S. Food and Drug Administration’s concerns regarding safety of raw food diets. And the FDA’s questioning even purchasing raw diets in the first place, in part, because no published peer-reviewed study has demonstrated any nutritional advantage or benefit to health. 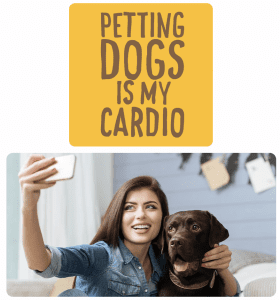 Following Petco’s lead, pet stores are saying they desire more “say so” regarding their clientele. So, Petco’s goal is to be more than a place to go to pick up a new dog bowl or to get more food.

Of course, for years, Petco has offered dog training classes. Now Petco, responding to pet owners’ demand for quality products or at least what consumers perceive as quality products. So Petco employees will now be trusted advisers on pet nutrition. Or perhaps that is the goal. As of May, Petco removed products containing artificial colors, flavors and preservatives from store shelves and online.

Though Petco’s ban on artificial ingredients may cost the chain a reported  $100 million in annual revenue, No surprise that brands like Origen, JustFoodForDogs and Freshpet have seen double-digit increases since Petco’s November 2018 announcement.

Consumers spent $33 million on human-grade pet food in the past year, Nielsen reported.

Meanwhile, Walmart has seen potential in the part market, taking a deep dive with its May 2019 announcement saying it would add in-store veterinary pet clinics, launch its first online pet pharmacy with low-cost prescriptions and free shipping, WalmartPetRx.com, and expand its offering of pet foods.

With 68 percent of U.S. households owning a pet and 90 percent of Americans living within 10 miles of a Walmart store, Walmart is expanding in-store retail veterinary clinics, starting with nine new clinics in the Dallas-Fort Worth area. With plans to reach 100 veterinary clinics over the next 12 months, these clinics offer affordable basic care services to save customers as much as 40 to 60 percent on vaccines and minor illness packages and exams.

All sorts of businesses are expanding pet-friendly policies particularly businesses seeking to attract millennials.  Meanwhile, products humans already enjoy are now modified for pets such as cannabis-based treats to ease anxiety (though there is no demonstrative science, yet, of exactly what CBS does or does not do), more pet-friendly cafes (some with “dog menus” and “dog drinks.”

Technology is playing a role too. In general, millennials, want more pet-related technology, from cat toys with their own aps to fitness trackers for dogs.