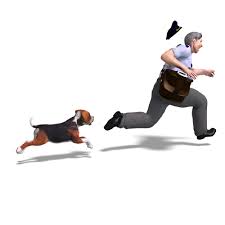 Dogs are too often unsupervised in backyards, so postal carriers have forever been a victim of dog bites. Of course, some savvy delivery personnel carry dog treats. Instead of barking in fear (more common than protection), the dogs look forward to their appearance.

Prevention is important – it would seem obvious. Not only so prevent dogs from biting people and resulting injuries and cost of medical care, but also to prevent the outcome of euthanizing many of the dogs who do bite.

According to the United States Postal Service, here are the cities dog bites occur in most often:

From the American Veterinary Medical Association:

National Dog Bite Prevention Week® takes place during the third full week of May each year, and focuses on educating people about preventing dog bites. The dates in 2016 are May 15-21.

With an estimated population of 70 million dogs living in U.S. households, millions of people – most of them children – are bitten by dogs every year. The majority of these bites, if not all, are preventable.

Take this opportunity to learn more about dog bite prevention and help educate others so we can all work together to prevent dog bites.