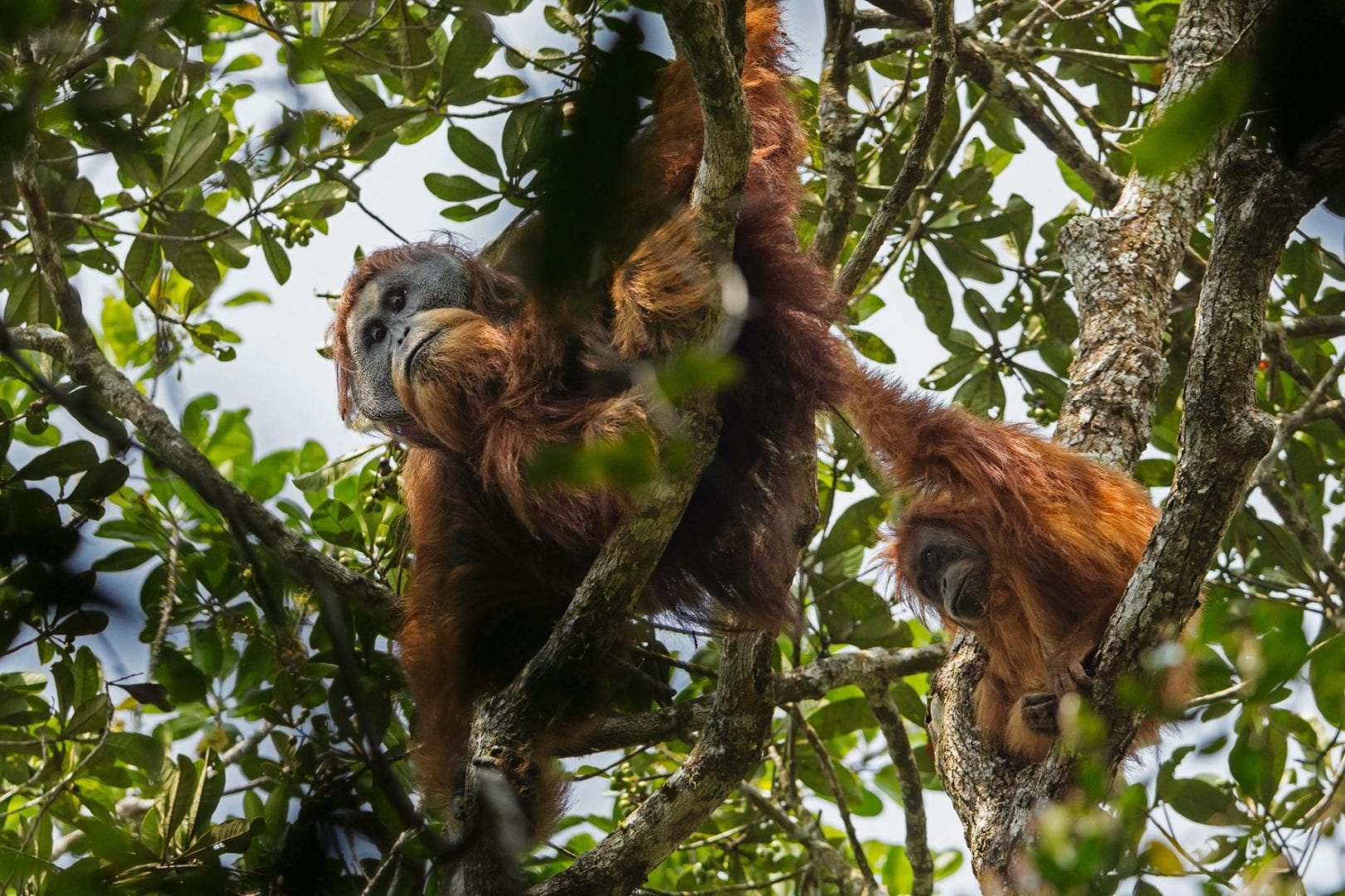 Orangutans are the most endangered and threatened of the great apes. Specifically, according to National Geographic Society, on November 20, 2013, the Sumatran Orangutan Conservation Programme got a call about an injured orangutan found in the mountainous region of Tapanuli.

Despite veterinary treatment, the orangutan, named Raya, died eight days later. But Raya lives on as the representative member of a new orangutan species, Pongo tapanuliensis, or the Tapanuli Orangutan—likely the second rarest great ape species on the planet (next to the Cross River Gorilla) with about 800 remaining individuals. However this new species is the most threatened because their population is fragmented, and their forest homes are being destroyed at an incredibly rapid pace.

Orangutans may not be around for long—it’s a shocking reality—unless something is done.

Deforestation is the primary explanation for the disappearance of orangutans and other great ape species. Meanwhile, the slash-and-burn techniques used by desperate locals, and, increasingly, logging to build palm plantations, are not sustainable. The disappearance of rain forests in Asia (and elsewhere) affects weather patterns worldwide, and, of course, many other species pay the ultimate price when trees are cut.

The newly identified orangutan species is found only in a single high-elevation forest called Batang Toru—a population that has long puzzled University of Zurich geneticist Michael Krützen, who has been studying the great apes for over a decade.

A century ago, there were about 230,000 orangutans—approximately four times as many as there are today. The Bornean Orangutan is estimated to number around 54,000 individuals, while there are an estimated 6,600 Sumatran Orangutans.

The orangutan species is fragmented into 13 populations, but only six of them boast more than 250 animals and are therefore regarded as viable in the long term. However, even these populations are under threat due to ongoing habitat loss.

The Bornean Orangutan was once distributed throughout large areas of Kalimantan (Indonesia) and Sarawak and Sabah (Malaysia) on the island of Borneo. But, its population has fallen by more than half over the past 60 years, while at least 55 percent of its habitat has disappeared over the last 20 years. 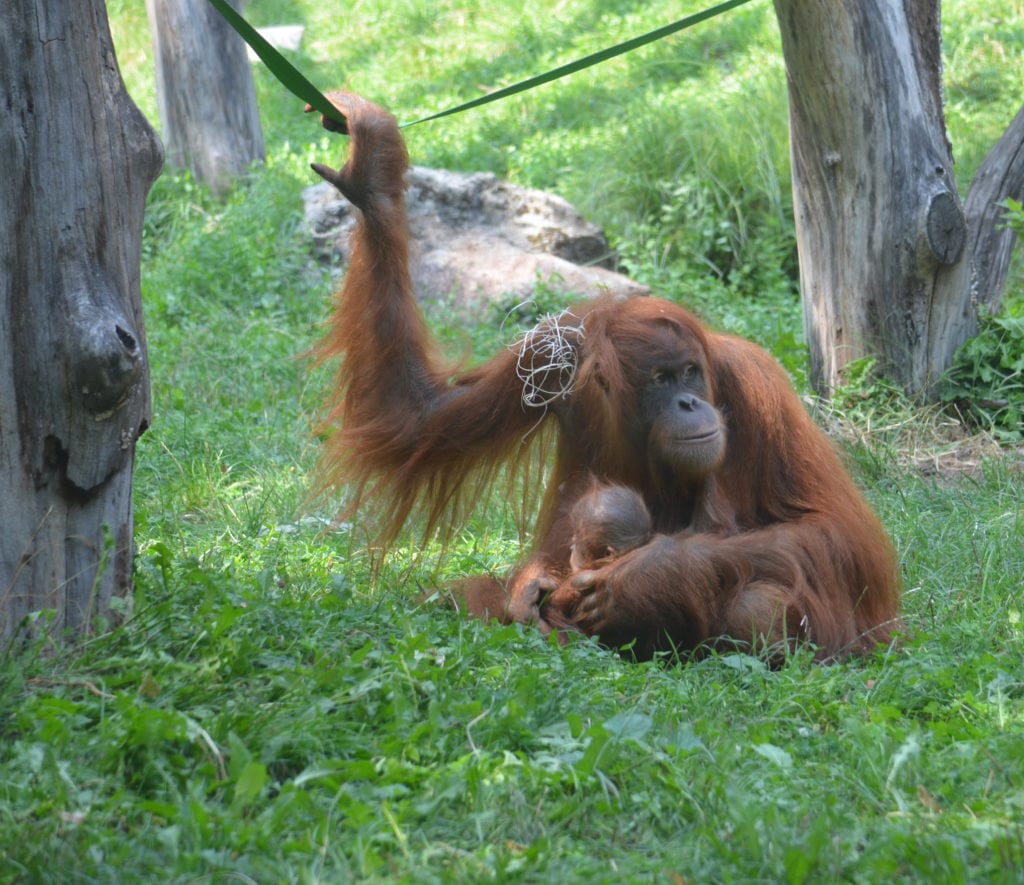 Bornean Orangutan mom and baby at the Budapest Zoo.

Most Bornean Orangutans are now found in Kalimantan, especially along the east coast. The majority of wild populations are located outside of protected areas, in forests that are exploited for timber production or are in the process of being converted to agriculture.

The  Western Lowland Gorilla is the most widespread, possibly numbering 100,000. 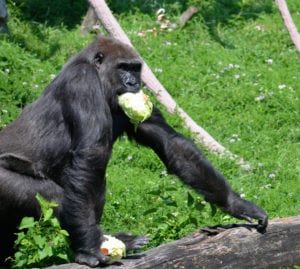 A Western Lowland Gorilla at the Lincoln Park Zoo in Chicago.

The Cross River Gorilla is currently the world’s rarest great ape, with a population of only around 300, restricted to a small area of highland forest on the border of Cameroon and Nigeria. 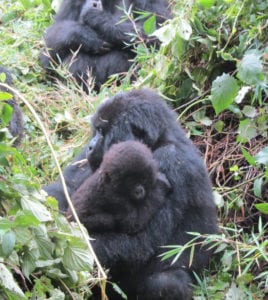 A Mountain Gorilla in the Rwanda Virunga Mountains.

The total population of the Mountain Gorilla is around 880 individuals, and is split into two separate groups. It is the only great ape species with a stable population, greatly due to protection by the government against poaching and habitat destruction, because of the profits made off ecotourism—the government realizes that Mountain Gorillas are worth far more alive than dead.

The Central Chimpanzee is the most numerous of all chimpanzee subspecies, with a population of up to 115,000 individuals.

The Western Chimpanzee once occurred in 13 countries, from southern Senegal eastward as far as the Niger River in central Nigeria. Its distribution is now extremely patchy, reflecting the fragmentation of its habitat. The total remaining population is thought to be about 21,000 to 55,000 individuals.

The Eastern Chimpanzee ranges from the Ubangi River/Congo River in the Central African Republic and DRC, to western Uganda, Rwanda, and western Tanzania. Small, relict populations are found in Burundi and southeastern Sudan. The population is unknown, but is thought to be under 10,000 to 20,000.

The Nigeria-Cameroon Chimpanzee is the least numerous subspecies, with a total population of less than 6,500 individuals remaining in Nigeria and Cameroon.

Since nearly all their numbers live in the politically volatile Democratic Republic of Congo, their population has been less studied, but it is thought that approximately 10,000 to 50,000 individuals remain.

All Great Apes are directly related to humans, and (depending on the species) share at least 96 to 97 percent of our genetics. This is a time to step up and support your favorite great ape. They need it.
Orangutan Foundation Intenational
Dian Fossey Gorilla Fund
Jane Goodall Institute
World Wildlife Fund