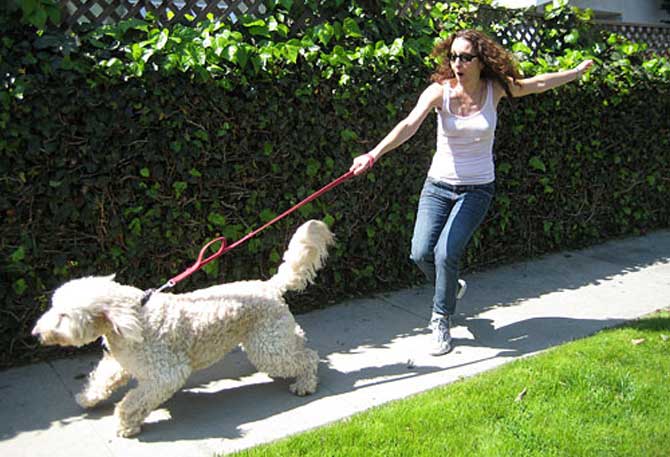 Imagine going to jail for not walking your dog twice a day. Some canine advocates in Germany are barking with joy and others are growling – what do you think of the new proposed German law mandating walking dogs twice a day?

The new proposed German dog law is wide-ranging, and I wish we had something similar to most of what Germany is proposing in the U.S.

For example, rules are being devised to crack down on “puppy farms” (called puppy mills in the U.S.) by banning breeders from looking after more than three litters at any one time. If enforced, this would help to knock the mass puppy producers out of business. The trick to all these welfare changes is enforcement.

There’s no questioning that tethering dogs is not humane.

Sometimes dogs can choke themselves, or get loose from chains and roam a neighborhood which they can be hit by cars or be responsible for dog bites. Some dogs with perfectly wonderful personalities develop barrier aggression when chained up. In very hot or very cold weather, it is appropriately considered inhumane to keep dogs outside without shelter. Dogs on chains can develop thunderstorm anxiety if left outside in a storm, and potentially the chain can even struck by lightening.

Also, to support socialization, not only are those twice daily walks potentially to be included in the new German law but also that puppies (age is not indicated) can’t be left home alone for too many hours.

The country’s Agriculture Minister, Julia Kloeckner  has said “Pets are not cuddly toys — their needs have to be considered. It’s important for dogs to get exercise and not be left alone for too long.”

I absolutely agree regarding what the Agriculture Minister is saying, except the part about walking twice a day for at least 30 minutes per walk. I agree that these walks may be the “goal,” however, there are many geriatric dogs who should not walk that far twice a day, or dogs post-surgery. Also what about senior humans or people with disabilities who simply can’t walk dogs? I suppose if you’re a dog walker, living in Germany might soon be quite profitable. I have said many times that our dogs are under-exercised, and the enrichment benefits of walking dogs (not to mention the benefit to humans); however 30 minutes presumably in any weather twice a day every day might not be a practical idea for all dogs or all people.