Parrot May Know Who Committed Murder 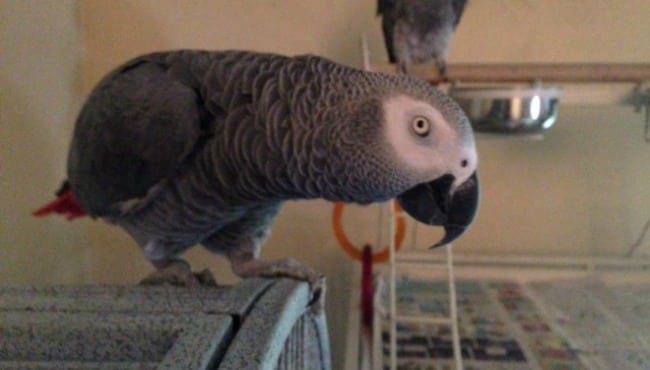 A possible murder witness has something to say.

His name is “Bud,” and he’s an African gray parrot in Ensley Township, MI, with a filthy mouth, according to NBC affiliate WOODTV.

His latest phrase – the one he won’t stop shouting at the top of his lungs mimicking his owner’s voice – is a chilling one: “Don’t f-ing shoot!” It seems the bird might have been traumatized.

Bud’s owner, 45-year-old Martin Duram, was fatally shot at his home in May 2015, according to ABC affiliate WABC. His body was found near his wife, Glenna, who had suffered a gunshot wound to her head but is alive. Though police initially assumed Glenna Duram was a victim of the shooting, police reports obtained by WOODTV revealed that she is now a suspect.

Relatives have said that they believe Martin Duram’s final moments were imprinted in the bird’s memory and that he continues to relive the slaying. They noted that Bud mimicked both Durham and his wife.

African Gray parrots are noted for the ability to mimic precisely, both sounds (like a doorbell or alarm) or human words and voices. And, according to Dr. Irene Pepperberg and other researchers, parrots may even may know what they’re saying, far more than most would have ever expected. In my opinion – based on reports – it may be that the parrot is even suffering from post traumatic stress disorder syndrome. And I’m not kidding about that.

I recall receiving a note from a reader several years ago saying that he left on the TV for his parrot when left the house, as he often did to keep the bird company. When he returned home late at night,  the bird kept repeating, “How tragic; I am so sad.” It was the night of that Princess Diana died following an auto accident, and the station he had left on was CNN. The commentators no doubt repeated what the bird ended up saying. Did the bird have any sense of what happened? Was the bird really sad? The reader noted in his letter to me that he thought his bird had been traumatized.

Bud’s new owner, Martin’s ex-wife, Christina Keller has reportedly said that the bird has a habit of replaying voices of a man and a woman locked in a fierce disagreement.

“It’s intense,” she added. “When it happens, my house turns cold.”

Police reports reveal that investigators have been asked whether the bird could be used as evidence, according to WOODTV, but they don’t show how police responded.

Newaygo County Prosecutor Robert Springstead told that station that he has heard about the talking parrot but hasn’t reviewed any footage of the animal. He said he’s waiting for Michigan State Police to finish their investigation before deciding whether to file charges, noting that “there’s some evidence to support” the idea that Glenna Duram killed her husband.

I recall when O.J. Simpson was accused, Nicole’s Akita likely witnessed what happened. Some of the evidence was allowed in court, but very little. At the time, I wrote about this in People magazine (no longer online), and here is the Time magazine version: “Prosecutors cited the howls of Nicole Brown Simpson’s dog to fix the time of the double murder. Neighbors testified that they heard the barking or saw the dog, an Akita named Kato, between 10:15 and 11 p.m. the night of the murders. Eva Stein, Nicole’s next-door neighbor, said she was awakened at around 10:15 by the “very loud barking of dogs.” Another neighbor, Steven Schwab, said that while walking his dog at about 10:55 pm, he came across the Akita, which had bloody paws.”

Indeed, the Akita likely knew who ‘did it.’ And the same may go for Bud the parrot. Unlike the dog, the parrot might have some ability to tell us. My question: Should we listen? I’m unsure of the legal answer – but perhaps we should consider the bird.