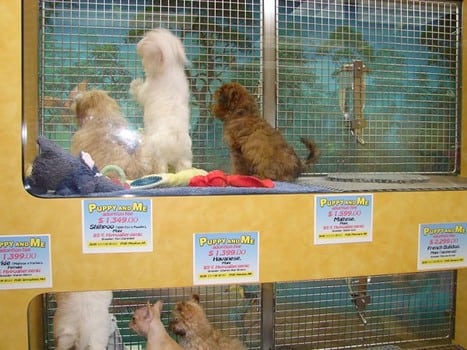 We can’t allow the puppy mills to win.

Several months after the Chicago ordinance to ban the sales of dogs, cats and rabbits from pet stores (which passed in 2014) went into affect (in 2015), I heard what was happening at some pet retailers. They said they were getting their dogs from non-profit rescues. It was a way around the ordinance, as shelter and rescue dogs are allowed to be sold according to the ordinance. But are these “rescues” real?

I attended a meeting with then Chicago City Clerk Susan Mendoza (who was instrumental in helping to get the ordinance passed in the first place) and with the ordinance’s principal advocate, the non-profit Puppy Mill Project founder Cari Meyers.

I have talked about this issue on WGN radio, and was hoping a TV station that I contacted would follow up. The Chicago Tribune has indeed done that in a report that is an example of what I suspect will be award winning investigative journalism. Moreover, my hope is that this report will spur action by the City council to close what appears to a loophole in the ordinance.

But who would work that hard to get around this ordinance, or seemingly get around it? Is this about money or saving dogs. What do you think?

Here’s what I know – and anyone involved in animal welfare knows:

It turns out any organization can get the paperwork and be called a rescue as the Tribune story explains.

While I absolutely and fully support the notion of dogs and cats never being sold (as opposed to really adopted) at pet stores; the real message is to consumers about where to never buy dogs and cats.

Even the few pet stores still managing to operate in Chicago as they (for now) navigated a loophole in the law, the reality is they would simply go out of business if folks didn’t buy from them. Don’t buy dogs or cats or even rabbits from a pet store. It’s that simple. But people still don’t know this, or allow impulse to take over.

And when looking online, don’t buy if you can’t visit the facility – unless you know for a FACT that it is legit – even if they maintain they are a rescue they may not be.

Some still feel to purchase a designer little pooch is chic. I suggest it is instead cruel unless it is from a responsible breeder. Even if the dog you purchase is in good health (both mental and physical health – and your odds aren’t great), what about the mother’s of those dogs who are treated as breeding machines and kept in horrifically inhumane conditions?

Maybe things will change, but as of right now, the U.S. Department or state departments of agriculture can’t be depended upon. If they did their jobs, puppy mills simply wouldn’t be here; after all, how could they pass inspection after inspection. I can’t explain why they are still here – but they are. And enough is enough!