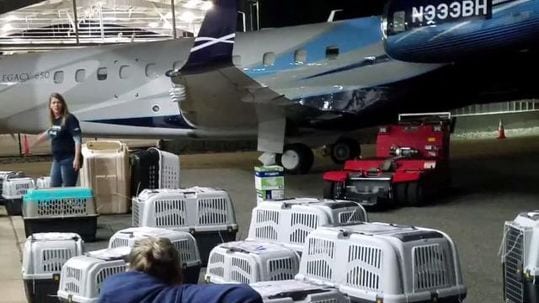 Puerto Rico is a mess – there isn’t a report from the island which doesn’t indicate that. When I first interviewed certified animal behavior consultant/dog trainer and Puerto Rican resident Terrie Hayward for the piece which appears below, most people who I heard from expressed gratitude for shining a light on the truth. However, I received two responses critical of the story, saying I was politicizing the problem.

I beg to differ. You want some facts?

This story – posted below – was originally published October 3, when about three weeks later, about 90 percent of the island remained without power and numbers of people becoming ill was on the rise because of third world country conditions in an American territory. This is the same day that the USNS ship Comfort finally arrives in Puerto Rico, only after millions of ordinary of citizens signed petitions asking for this to happen, the media began to ask why the ship wasn’t there, and after public officials on both sides of the aisle pushed for it. Why would it take all that pushing?

For starters, about 1,800 died as a result of Katrina, not “literally thousands” – though of course, 1,800 is awful. The number is death then in Puerto Rico was 34, but the damage to the infrastructure system, number of homes severely damaged or destroyed is all far greater as a result of Maria (compared to Katrina). But why keep score? What does it matter?

Later the President was oddly tossing out paper towel to desperate residents as if he was tossing treats to dogs. 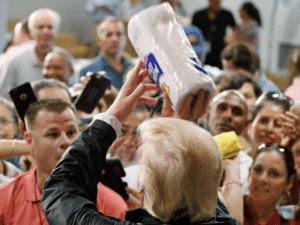 Today, October 7, still about 90 percent of the island is without power and the number of people becoming ill due to lack of medicine and generally poor conditions continues to rise. People have begun to die because no medications for illnesses, ranging from bacterial infections to diabetes, are available.  No one is certain of total deaths, but the number now exceeds 34.

Why is stating the truth being called ‘politicizing?” Perhaps, the truth is embarrassing. It should be.

Are the conditions in Puerto Rico as bad as we’ve heard and seen? Terrie Hayward, doesn’t hesitate for a half a second. “Yes, it is – desperate.”

Hayward, a certified dog behavior consultant and dog trainer, lives in Rincon, Puerto Rico, on the far west side of the island.

Prior to Hurricanes Maria and Irma impacted pummeling the island, life wasn’t easy for many companion animals. Dogs may wander from rural town to town, or live on the beach, ravaged my mange and often malnourished. Cats generally fare better living on their own outside, but there are so many. 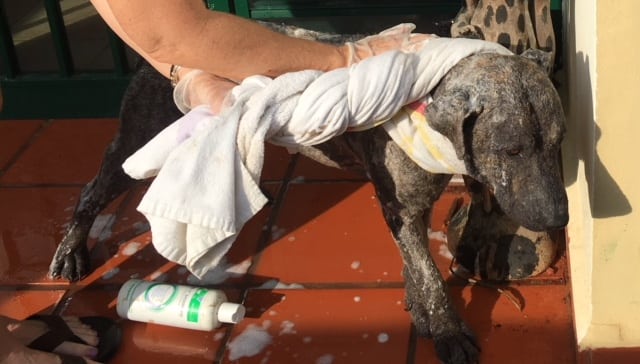 Internet reports have indicated that many of these street dogs and cats perished as a result of Maria. Hayward isn’t sure if that’s true, or not. It’s too early to tell.

“Local rescues begged people who kept dogs tied up outdoors (an all too common practice in Puerto Rico) to at least untether them,” Hayward says And they did that.

Also, horses were let loose to deal the hurricane in open fields, viewed begin far safer that being kept in stall which no doubt would be destroyed. The strategy worked, and Hayward notes that as far as she can tell the horses in her community all survived. 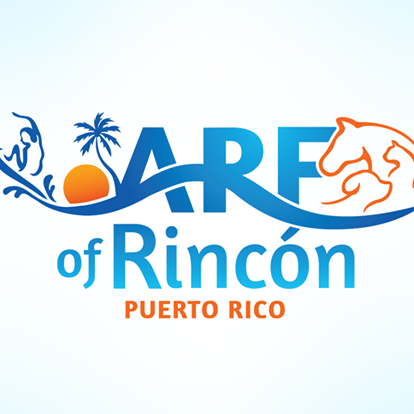 Hayward says the situation is desperate and the exact number animals require saving remains unknown. The local animals rescue she works with is ARF – Animal Rescue Foundation of Rincon. The woman who operates the group rode out the storm with lots of company, 21 animals in her home – and while they all survived, the kennels were destroyed.

The good news is tragedy is providing an opportunity for so many homeless  animals to be delivered to major cities on the U.S. mainland for adoption.

Find home on the mainland may offer a pet “reset” on the island. Well before the hurricanes, there’s has been a significant over-population problem.

Spay/neuter doesn’t happen often. Money is only one stumbling block, says Hayward. “If you have just a little extra money, are you going to spend that on spay/neuter? People may want something for themselves or their children, or be unaware of the importance of spay/neuter or not have thought much about it because this is what they’ve always done.”

When veterinarians from the contiguous U.S. visit Puerto Rico to offer low cost or no cost spay/neuter, there’s push back from some local veterinarians who believe money is being taken from their pockets.

What’s more, in this very dedicated and religious place – birth control may not be practiced with mom and dad, so why in the world spay or neuter? Also, there’s the “macho thing” about leaving pets intact.

If dogs are trained at all, many trainers use aversive techniques. One reason why Hayward so much likes ARF – Animal Rescue Foundation of Rincon is that “They recognize, value and respect the value of positive reinforcement training,” she says They don’t just ship dogs out (to the mainland or adopt locally) who are terrified – they enlist Hayward’s help first. Of course, they will now require help more than ever.

Hayward does as much education as she can, particularly to schools- that’s where culture changes. “My goal is to show people there’s a better way for the animals, and it’s also better for them. Change is happening, though sometimes slowly.”

Hayward and her husband survived, as did her two dogs and two cats. Her house is standing, but suffered damage. And she says she was one of the lucky ones.

“Conditions are horrible,” she says.

For starters, by most accounts, about 1,800 died as a result of Katrina, not “literally thousands” – though of course, 1,800 is awful. The number 34 doesn’t include homes in the countryside still not checked, or those dying in hospitals or at home because medications aren’t available, even common antibiotics.

“It doesn’t matter,” says Hayward. “How can you compare and validate numbers like this – because there are fewer deaths the event is less tragic? No, it’s not.” 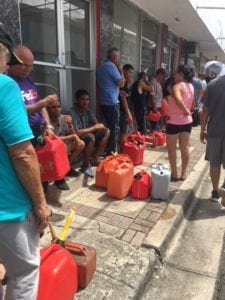 Meanwhile, Hayward points out that many roads remain impassible. If you have the gasoline to get to a store, and find that the store open, it’s cash only. Many cash machines remain inoperable. There are long times if you find one that works. Water is scarce. And while there are fewer long lines for gasoline in some places, fuel remains in short supply.

On one occasion, Hayward noted a woman in her mid-70’s had to wait eight hours to get gas.

Food is in short supply too. The U.S. government trucks aren’t exactly offering turkey dinners. She says one food delivery reportedly consisted of raisins, Vienna sausages (what do you cook those on without electricity or store them without refrigeration?) and bright orange crackers.

Many, including Hayward, used barrels or any vessel they could find to collect rain water.

And when President Trump noted that Puerto Ricans weren’t willing to help themselves, Hayward says “That’s a demeaning comment, It’s untrue and I’m insulted, and I’m not even a native born Puerto Rican (she’s originally from Boston, MA). “That’s all people did, and they continue to do. Those who have gasoline drive others, they clear roads, and take in families who can’t live in their own homes. People are busting their butts to help one another.”

Hayward left the island for several reasons. For starters, as a speaker in demand, she had commitments to keep and wanted the rest of her family settled. “Getting out, particularly with four pets, wasn’t easy,” she says. Hayward is now headed to stay with family in New England.

However, soon she’ll be back in Puerto Rico. “Definitely before I see much snow,” she says. “We have a lovely home there. We love it. We aren’t going to leave. And we want to help.”

This is the second report regarding Puerto Rico post Hurricane Maria, here’s the first.