Punching A Dog is NOT Training, It’s Animal Abuse

Punching a dog repeatedly to establish dominance is animal abuse, period. That’s true, even if a police dog handler is training a police dog as much as it is true for anyone training a pet dog.

In Vacaville, CA (midway between San Francisco and Sacramento) this police officer was caught on video “correcting” his dog.

To be clear, this isn’t training, it’s abuse. It’s hard to believe that any professional trainer still supports the mistaken notion punching a dog has any place whatsoever in training. And I suggest this is even more true for police dogs, whom an officer is required to develop a trusting relationship, which may make the difference between life and death.

Apparently, the explanation here for this action is that the dog had tried to bite the handler.  It’s possible that this individual dog just isn’t the best choice for this job. But even more likely, what is known is that aggression begets fear and mistrust which leads to further aggression. 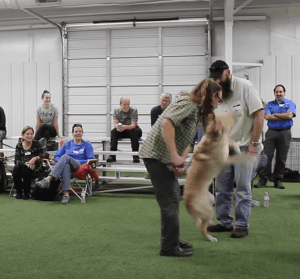 Force or punishment does work to instantly stop a behavior. But there’s fall out as a result, aside from welfare concerns

The American Veterinary Society of Animal Behavior has authored a position statement, debunking the myth that there is any need for dominance training.  This position paper was authored just a few years ago, based on peer-reviewed published papers. Today, there’s even more evidence consistent to support the advantages of learning more effectively using positive reinforcement.

For me, the most compelling study I’ve seen is when veterinary behaviorist Dr. Theresa DePorter, based in Bloomfield Hills, MI, looked at a local dog trainer who used aversive training methods in his puppy classes. After one year, 38 percent of the puppy class grads were re-homed, surrendered or euthanized. It gets worse, after two years, 60 percent of dogs were re-homed, surrendered or euthanized. 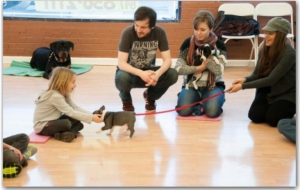 Puppy classes should be fun, but so should training even for military working dogs

DePorter then convinced that same trainer to offer positive reinforcement classes, and instructed him on how to do so. The five weekly in-hospital puppy socialization classes were for pups ages seven to 12 weeks. This wasn’t a typical tiny study of a pawful of dogs; she followed 519 puppies for a year.  And one year later, 94 percent of dogs remained in homes, compared to aversive training which over a third of puppies re-homed, surrendered or euthanized a year later.

The better the relationship a military working dog has with the handler, the greater the odds they both live. studies have analyzed training methods used on military working dogs (MWD). A 2008  survey of 303 Belgian MWD handlers revealed the use of harsh training methods were not as effective as positive reinforcement, and may even present a welfare issues. Pulling on the leash and hanging dogs by their collars were the most commonly used aversive stimuli. The team’s performance was influenced by the training method and by the dogs’ concentration: (1) low-performance dogs received more aversive stimuli than high-performance dogs; (2) dog’s distraction influenced the performance; distracted dogs performed less well. And positive reinforcement seemed to positively impact the relationship and the bond with the handler. 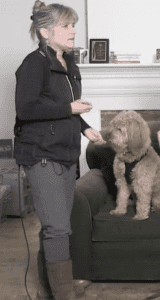 2020 was a good for year dog training because Petco made a huge statement by stopping the sales of shock or e-collars. Karen Pryor Certified faculty member and dog trainer Laura Monaco Torelli of Animal Behavior Training Concepts explains HERE on my WGN Radio Steve Dale’s Pet World radio show that she agrees. Monaco Torelli talks about how dogs trained with aversive methods often shut down, taking the “joy” out of their life. However, more often, the fall out causes all sorts of issues which she explains. When shock collars are used, dogs are more hesitant to offer behaviors – apparently concerned about what might happen. I suggest that punching a dog is even worse.

Science matters a great deal, but how about what is simply a ‘gut feeling?’ How can watching this video of the officer repeatedly punching his dog be right? I suggest this police department requires a new dog trainer or a veterinary behaviorist if the current trainer is even remotely accepting of these actions.

I am generally an ardent supporter of police. I hope Captain Lydon (seen in this video) is enlightened by this post or others who are truly educated.