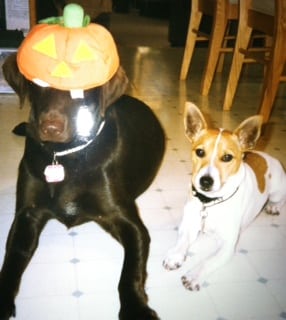 Twelve years ago (2005), my 8-year-old 12-pound Jack Russell Terrier, Mickey, caught leptospirosis. We lived in a rural subdivision where opossums, mice, squirrels, and raccoons were common annoyances. Oh, and the house was surrounded by mulch, a lepto transmitter.

One September morning, Mickey was a sprite, feisty Jack Russell. A few hours later, he just sat and couldn’t stand up.

Fortunately, our regular veterinarian quickly diagnosed Mickey, but said his facility was unable to treat him. This disease quickly attacks and shuts down kidneys. At the time, our local animal hospital wasn’t set up for the level of care Mickey needed.

Our local vet referred our pooch to a clinic in Northbrook, Illinois, where a smart and compassionate veterinarian said he’d do his best to save our dog. This doctor really knew his stuff. He had much experience with this disease and had actually once saved a horse from lepto. That afternoon, Mickey had an 11 percent chance of living.

Mickey was placed in isolation and was on several IVs for four days. When he was finally released, he’d lost almost 15 percent of his body weight and was weak and thin. After we brought him home, and for the following two weeks, I administered saline IVs twice per day. There were also tablet medications to give him three times per day for many months. Thereafter, Mickey’s kidneys had to be tested every four to six months for the rest of his life.

Oh, by the way, the day Mickey was diagnosed, we also owned a Labrador and was taking extended care of a friend’s Labrador. Both dogs were immediately tested for lepto (each negative).

Trust me, leptospirosis is nothing to messed with; it is heart wrenching.

Last year, we adopted Gizmo. Of course, Gizmo gets the leptospirosis vaccine.

You write about things like dog flu and leptospirosis a lot and tell people to vaccinate, and then they have a sick or dead fur baby. We’re over-vaccinating our pets. —L.P. Cyberspace

Thank you for spotlighting the plight of what’s happening in Puerto Rico. These are American citizens, and for pointing out that one repercussion is leptospirosis. I once worked in the Peace Corps in my younger years in Africa, and we saw leptospirosis in people. It’s horrible, and in can be avoided in dogs, and should be avoided.  —L. T., Miami, Florida