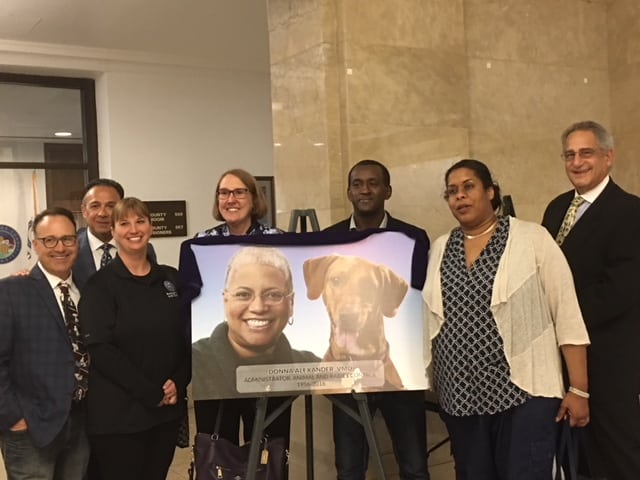 On May 20, Dr. Donna Alexander, then Administrator of the Cook County Department of Animal and Rabies Control was on my WGN radio show. I spoke to her privately the very next day, about several topics, including the need to update the trap/neuter/return ordinance and the continuing sad saga at the Animal Welfare League in Chicago Ridge. We had some terrific ideas, and she was invigorated – she always was. Within days, she was found dead.

I learned of her passing after an airplane flight to New York City; when I landed my phone was blowing up with texts.

Dr. Alexander’s smile brightened my studio. I’ve often said that. Now you can see it for yourself. It so happens, as we often do, we Facebook live a part of the program. I’ve now posted this bitter sweet video on YouTube. So, you can see for yourself that infectious smile.

My hope is that posting this video will be appreciated by her family, people closest to Dr. Alexander and serve as education about parasites, which we spoke about. Dr. Alexander was passionate about education.

Dr. Alexander was always so excited about the low cost rabies vaccine clinics as well as microchips offered at low cost. She is gone, but the program continues.

There’s an event tonight to pay tribune to Dr. Alexander, and the Cook County Board honored her shortly after her passing. I was asked to speak, and honored to do so. Here’s what I said:

“When Dr. Alexander appeared on my WGN Radio show, she said that the Cook County Board should honor me – and now in a terrible twist of fate, I am honoring her and she is not here to hear it.

Knowing Dr. Alexander she wouldn’t want it to be about her – it was about how she could help. And help she did.

She made dozens of appearances on my WGN radio show, her most recent on May 20.

The next morning she called to tell me she had a house fire in her condo, and was now living at a hotel. I expressed concern about her, her things….and she said ‘No, no, I am calling to tell you about my neighbors’ cats.’

‘I trained all my neighbors on how to get their cats into carriers should something happen. They all got out safely. And I knew you would be thrilled.’

Dr. Alexander was as hands on as major county veterinarian in America as she personally gave so many countless, thousands of vaccines over the years. When I wrote about her passing, via social media, I am told when people returned – even three years later for another rabies vaccine, Dr. Alexander would remember their pet. She knew all the dogs in her neighborhood by name, not the neighbor’s names so much, but definitely their dogs.

Our way in which we deal with community or feral cats was considered ground-breaking, and Dr. Alexander’s and her predecessor Dr. Dan Parmer’s insistence on mandating by law we include rabies vaccines was a part of that. And we need to make some changes now, which Dr. Alexander agreed.

On the very week dog flu hit Chicago, by coincidence Dr. Alexander was in the studio with me. Ultimately, thousands of dogs were sickened – and if it wasn’t for her proactive response, that number – including the dogs dying from flu would have been higher. When I suggested closing dog friendly areas in the city, I believe she was on the phone with the park district before I could even say ‘goodbye.’

So, what does a community do when the unexpected occurs to companion animals? Dr. Alexander’s approach is now a national model – even more than she knew.

About legislation she was savvy enough think hard about unintended consequences, and of course consider the science. I learned a lot from her.

She was once asked by a listener on WGN about the dog flu vaccine. ‘Why vaccinate?’ when most dogs get over the flu and only two to five percent die.

No perhaps – it was Dr. Alexander’s mission. And may I say, ‘mission accomplished.”

Here’s the entire interview on Steve Dale’s Pet World on WGN Radio with Dr. Alexander on May 20, as she explains why this summer we will very likely have a huge population of mosquitoes, ticks and fleas in the Chicago area.