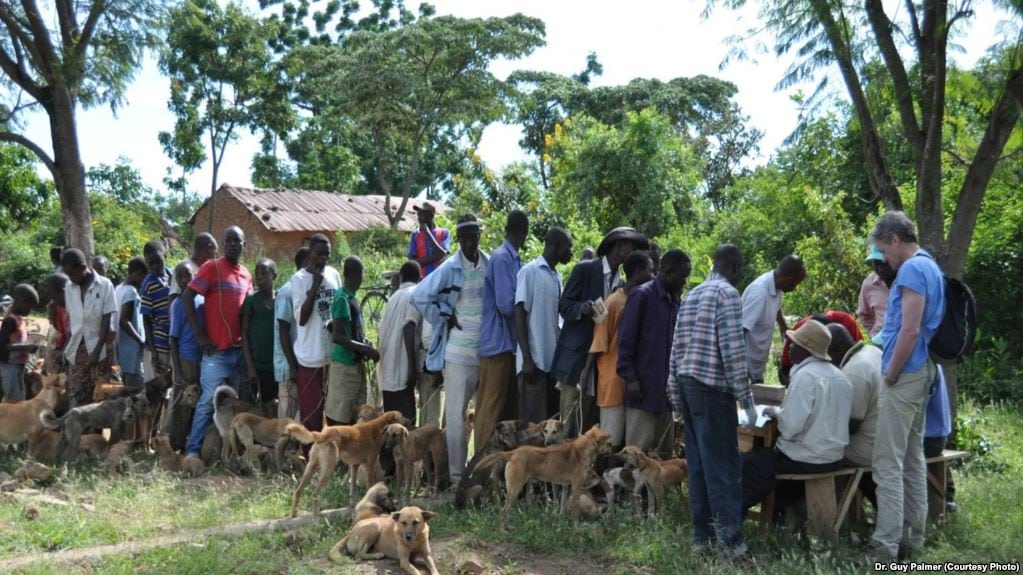 World Rabies Day was September 28. Over 60,000 people die of rabies and nearly half are children. Do consider experts suggest the human death toll is likely much higher as many deaths are not recorded, in rural China, India or Africa. This program will not only save human lives today and tomorrow (via education), but also dogs will be saved and potentially even wildlife. One reason for the decimation of African Wild Dog, in places, is rabies spread to this already endangered species, as well as to species of jackal, and other species.

Global Alliance for Rabies Control, together with health organizations from around the world, set a goal of eliminating human rabies transmitted by dogs by 2030. Merck Animal Health (known as MSD Animal Health outside the United States and Canada) is pleased to announce our continued support in the fight against rabies through the donation of NOBIVAC® Rabies vaccine and other resources to the Afya Serengeti Project and Mission Rabies, organizations working to eliminate this disease in the world’s most at-risk regions.

“Each year, an estimated 60,000 people die from rabies, with 40 percent of those deaths occurring in children under the age of fifteen”

Rabies, a neglected disease of vulnerable populations, is nearly 100 percent fatal but also nearly 100 percent preventable through canine vaccination. Africa and India still bear the highest burden of total annual rabies deaths.iCountries with the highest fatalities from rabies are India, Democratic Republic of the Congo, Ethiopia, China and Myanmar.ii

“Each year, an estimated 60,000 people die from rabies, with 40 percent of those deaths occurring in children under the age of fifteen,” said Ingrid Deuzeman, global marketing director, Merck Animal Health. “We are resolved to continue our collaboration with the Afya Serengeti Project, which we’ve been committed to for more than 15 years, and with Mission Rabies, in support of the global health community goal to eliminate rabies.”

Progress in the Fight Against Rabies

In more than 20 participating countries, when pet owners and veterinarians choose NOBIVAC vaccines, it allows Merck Animal Health to donate rabies vaccine to Mission Rabies and the Afya Serengeti Project.

“Mission Rabies launched at the end of 2013 and to date we’ve delivered the NOBIVAC Rabies vaccine to 700,000 street dogs in some of the world’s worst rabies hotspots. Our flagship projects are delivering amazing results with no human rabies cases having been reported in the Indian city of Ranchi, the State of Goa or the city of Blantyre in Malawi so far this year. It’s incredible considering just a few years ago, a hospital in Blantyre (the Queen Elizabeth Central Hospital) was reporting the highest incidence of child rabies deaths from any single institution in the whole of Africa,” said Luke Gamble, founder, Mission Rabies. “We are all driven to power Mission Rabies forward and without the support of Merck Animal Health NOBIVAC Rabies vaccine, we couldn’t do what we do. The vaccine is saving lives amongst some of the poorest and most vulnerable people in the world and it’s a privilege to be a part of this project with everyone.”

“The human toll of rabies is needless and tragic. However, over the past 20 years, we have shown that vaccination programs can reach enough dogs to eliminate rabies anywhere in the world,” said Professor Sarah Cleaveland, founder, Afya Serengeti Project. “With continued support from Merck Animal Health and other collaborators, I believe we have the vaccine and the tools to achieve zero human deaths from dog rabies by 2030.”

Eliminating Rabies in India and Africa

Mission Rabies does more than just vaccinate hundreds of thousands of dogs against rabies each year. They go to schools and educate children in these communities, informing them of the seriousness of the disease. Children are the most affected by rabies because they play with dogs and don’t understand how deadly rabies can be.

Saving Lives in the Serengeti

The Afya Serengeti Project has prevented thousands of deaths in the Serengeti through the widespread vaccination of domestic dogs. Since the start of the program, the incidence of human rabies, rabies in dogs and rabid dog bites has dropped to an all-time low.iv Each year, over 600 dog rabies cases have been prevented and 23 human lives saved. The effective control of rabies through dog vaccination has also had benefits for wildlife, including endangered African wild dogs, which have become re-established in the Serengeti National Park for the first time since the population disappeared as a result of rabies outbreaks in the early 1990s. Understanding the importance of providing vaccinations to other at-risk areas, the Afya Project has extended to Kenya, Bangalore and the Pune region of India.

For more than a century, Merck, a leading global biopharmaceutical company, has been inventing for life, bringing forward medicines and vaccines for many of the world’s most challenging diseases. Merck Animal Health, known as MSD Animal Health outside the United States and Canada, is the global animal health business unit of Merck. Through its commitment to the Science of Healthier Animals™, Merck Animal Health offers veterinarians, farmers, pet owners and governments one of the widest range of veterinary pharmaceuticals, vaccines and health management solutions and services. Merck Animal Health is dedicated to preserving and improving the health, well-being and performance of animals. It invests extensively in dynamic and comprehensive R&D resources and a modern, global supply chain. Merck Animal Health is present in more than 50 countries, while its products are available in some 150 markets. For more information, visit www.merck-animal-health.com or connect with us on LinkedIn, Facebook and Twitter at @MerckAH.