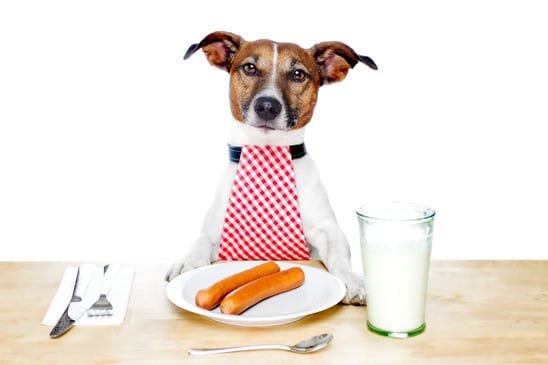 Raw pet food diets are an emotional trigger for so many. Still, science is science. Writing in the journal Vet Record, the researchers at Ulrecht University analyzed samples from 35 raw meat diet products across eight brands available in the Netherlands, a country where more than half of dog owners are thought to feed their dog, at least in part, with raw meat.

After thawing the meat, the scientists looked for the presence of Salmonella, listeria, E coli and antibiotic-resistant E coli, as well as two types of parasites: species of Sarcocystis and Toxoplasma gondii.

The results revealed that 23 percent of the products tested contained a type of E coli that can potentially cause renal failure in humans, while 80 percent of products across seven brands not only contained E coli, but somehow contained antibiotic-resistant E coli. This is a potentially huge concern for human and animal health.

There was no blind sample of a more conventional product; however, no study has ever demonstrated consistent numbers like these before.

Researchers explained it’s because parasites are rendered harmless by freezing, bacteria are not, and that both posed a risk in home-prepared, raw meat diets—not only to the pet but also to humans preparing the food—as a result of cross-contamination of human food, or through exposure to pathogens shed by the animals. As well as calling for increased awareness, the authors suggest that raw meat diets should be labeled to highlight the risks.

Researchers wrote there is no known benefit to feeding raw, while there are risks, perhaps more risks than previously thought.

Researchers did concede their study was limited by a small sample size.

The following is wording directly from the study from the journal Vet Record:

Feeding raw meat-based diets (RMBDs) to companion animals has become increasingly popular. Since these diets may be contaminated with bacteria and parasites, they may pose a risk to both animal and human health. The purpose of this study was to test for the presence of zoonotic bacterial and parasitic pathogens in Dutch commercial RMBDs. We analysed 35 commercial frozen RMBDs from eight different brands. Escherichia coli serotype O157:H7 was isolated from eight products (23 per cent) and extended-spectrum beta-lactamases-producing E coli was found in 28 products (80 per cent). Listeria monocytogenes was present in 19 products (54 per cent), other Listeria species in 15 products (43 per cent) and Salmonella species in seven products (20 per cent). Concerning parasites, four products (11 per cent) contained Sarcocystis cruzi and another four (11 per cent) S tenella. In two products (6 per cent) Toxoplasma gondii was found. The results of this study demonstrate the presence of potential zoonotic pathogens in frozen RMBDs that may be a possible source of bacterial infections in pet animals and if transmitted pose a risk for human beings. If non-frozen meat is fed, parasitic infections are also possible. Pet owners should therefore be informed about the risks associated with feeding their animals RMBDs.