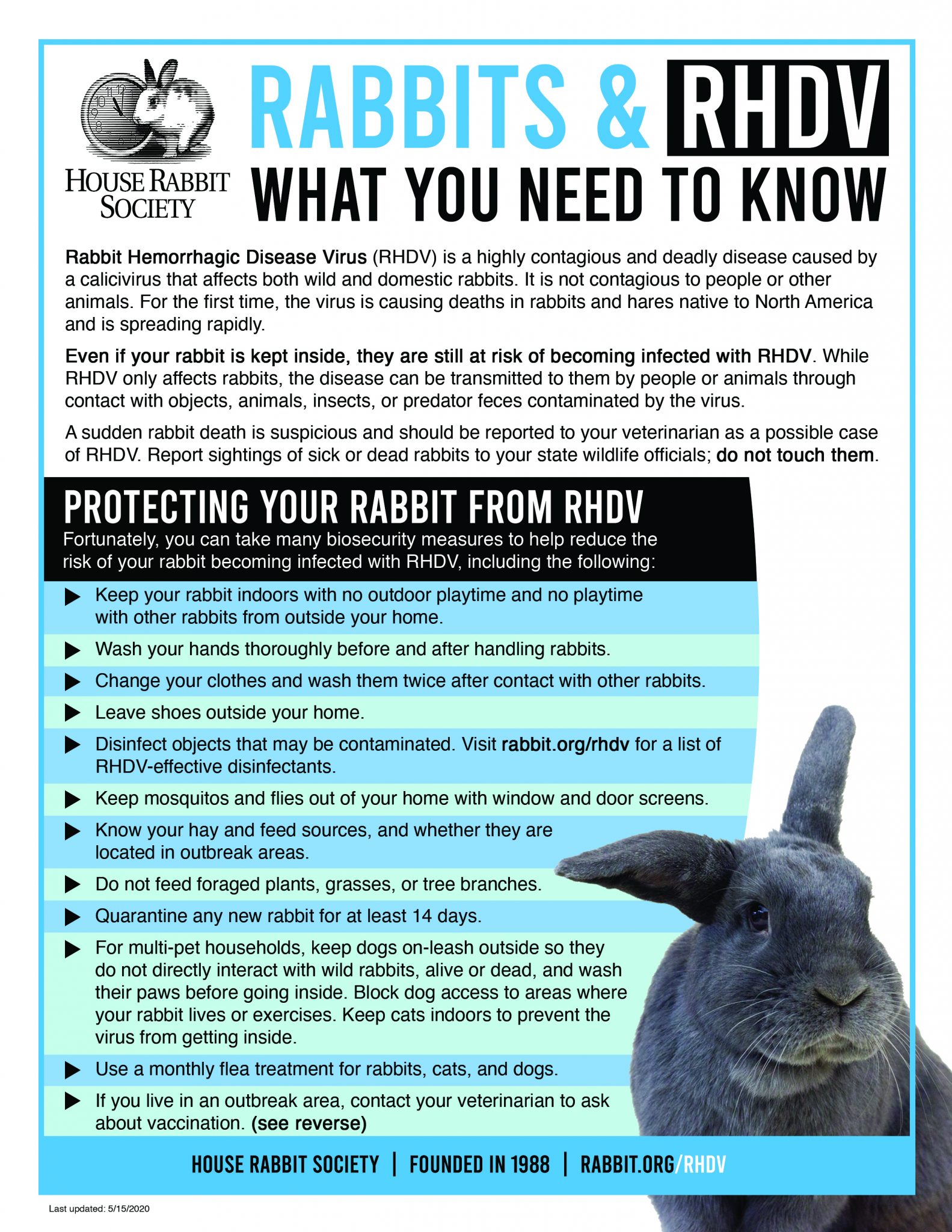 Rabbit Hemorrhagic Disease, which is considered fatal, is spreading in parts of the U.S. among wild rabbit species, and can also impact domestic rabbits. Though some individual rabbits, particularly those who are very young, may live, unfortunately most die. There is no treatment. In this post, I describe the disease and offer guidelines from the U.S. Department of Agriculture.

Readers asked about signs or symptoms of RHDV2  and this post is devoted to it, from Iowa State University College of Veterinary Medicine Institute of National Cooperation in Biologics and the House Rabbit Society.

In rabbits less than four to eight weeks of age, Rabbit Hemorrhagic Disease infections are usually subclinical (a symptomatic). However, some young rabbits may have elevated temperatures, and subclinical signs of liver disease.  Deaths have also been reported, though rarely.

Peracute and acute disease are the most common syndromes in adult rabbits. In peracute (fast moving) cases, infected rabbits develop a fever and die suddenly within 12 to 36 hours of its onset. The only clinical signs may be terminal squeals followed rapidly by collapse and death. Animals with the acute form survive somewhat longer, with signs of dullness/ apathy, anorexia and congestion. Animals may also develop neurological signs, such as incoordination. Some rabbits turn and flip quickly in their cages; this can resemble convulsions. There may also be respiratory signs (e.g., dyspnea, which is  difficult or labored breathing; cyanosis which is a bluish or grayish color of the skin, nails, lips, or around the eyes as well as a frothy nasal discharge); lacrimation (eye-tearing); ocular hemorrhages or epistaxis (nose bleeding). There may be bleeding from the rectum, the nose or the mouth. Animals that survive longer can develop a subacute form with severe jaundice, accompanied by weight loss and lethargy, but they also die in a few weeks. These animals may have diarrhea or constipation and abdominal dilatation just before death.

RHD vaccines have not been approved for use in the U.S., but due to the recent outbreak, vaccination has been allowed on a limited emergency basis in affected states. To be effective, vaccines must include antigens for the appropriate serotype, RHDV1 and RHDV2.

The House Rabbit Society offers this list of where current outbreaks are in the U.S.