Speaking Out on Kristen Lindsey Case 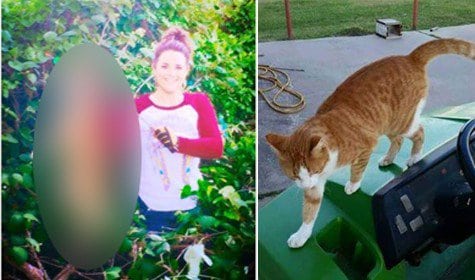 Dr. William Folger speaks out about regarding his expert testimony in the trial of Dr. Kristin Lindsey, offering a better understanding of what really did happen.

Lindsey is the veterinarian who posted on her Facebook page an image of cat impaled by the shaft of the arrow which she shot April 17, 2015. In the caption she bragged, “My first bow kill, lol. The only good feral tomcat is one with an arrow through it’s head. Vet of the year award … gladly accepted.” 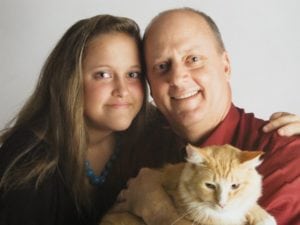 Dr. Folger with his daughter Haleigh, and a best pal

Folger was at a physician’s office when he began to receive emails about the post. Folger is in Houston – not all that far from Lindsey, who is in Brenham, TX.

Folger is a veteran of 35 years in practice. Among his many credits, he currently (for the second time) serves as President of the Society for Veterinary Medical Ethics, is the founding chair of the American Association of Feline Practitioners Welfare Committee and a previous member of the Advisory Board of the non-profit Winn Feline Foundation.

Like many veterinarians, Folger took to social media to express his views. On the practice blog, where he works, he wrote, “This reminded me of the scene of Hannibal Lecter stringing up the disemboweled police officer in Silence of the Lambs. Had her friend down the street, not a veterinarian, done the same thing we would have recommended psychological counseling.

I am not condemning all of the Texans that hunt birds or deer. It’s not the same and for those of us who cannot tell the difference, I’m not sure what to say…I hope this young veterinarian goes far, far away from Texas. She has shamed herself, violated her oath, tarnished the image of all Texans and veterinarians. I am confident the legal process will sort this out effectively.”

Initially, the Teas Board of Medical Examiners, on October 1, 2015, ruled that Lindsey should lose her license to practice veterinary medicine. However, Lindsey and her legal team instantly appealed – even though by now it was discovered that the cat Lindsey shot was named Tiger, an owned neighbor’s cats.  When her attorney Brian Bishop appealed (Lindsey’s license revocation), cat lovers around the world expressed their outrage. 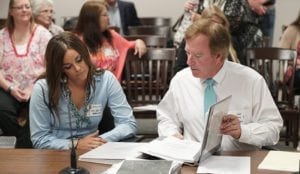 And that’s when Folger was asked to participate as an expert witness for an upcoming hearing.

With decades of advocacy for animal welfare, Folger said “yes” with the caveat that his opinions would be based on available evidence, and that he would not be swayed by attorneys on either side. Folger was not paid for his service.

So, he jumped into the fray – a decision he said he would make again.

Bishop, attempted to discredit the expert. Bishop noted that based on previously published blogs, and comments on a veterinary social media site that Folger was already biased. The judge dismissed these attempts, but Bishop kept at it.

Folger’s testimony made headlines, including his determination that Tiger was still alive when the infamous Facebook photo was taken of Lindsey smiling ear-to-ear holding Tiger, Folger explained why he believed Tiger was then alive. “The post mortem changes had not yet occurred; a right foreleg was pronated (turned inward) and forearms up too high for the cat to be deceased. I knew this and spoke to an internationally renowned expert in veterinary forensics prior to the administrative hearing. It was not possible that the cat was dead.” 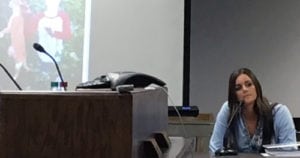 With that testimony, Bishop launched further attacks, accusing Folger of “flip-flopping” from his original published views. “I did not contradict myself,” says Folger in this exclusive interview. “For starters, my initial comments (in various forums including his blog and on a veterinary forum) suggested what I believe now, it’s hard to imagine a kill shot was from 20 yards away. I spoke to experts who say they could never hit a precise target at that range, and Lindsey conceded she was a novice. I never initially commented or even thought about if the cat in the (Facebook) picture was still living or not until I was asked to comment on that specifically under oath at the administrative hearing.”

Despite Folger’s testimony, the outcome was in Lindsey’s favor. Her veterinary license was suspended for one year; she’ll be on probation for four years and complete animal-welfare training courses. She did not forever lose her license to practice veterinary medicine in Texas or anywhere else.

Folger, while the expert witness, says that he played no role in determining the final resolution. He adds, “I wasn’t surprised by the decision given the spiritual nature, grace and forgiveness expressed by Tiger’s owners.”

Tiger’s owner, Claire Johnson said she didn’t want to be responsible for permanently damaging Lindsey career.  “I think the judges’ decision was consistent with what Claire Johnson expressed. She didn’t even file (civil) charges against Lindsey,” Folger says.

However, the court of public opinion isn’t quite so forgiving. And Folger agrees personally that the initial decision to revoke Lindsey’s ability to practice medicine is most consistent with the veterinary oath and for that matter, Texas law, forgiving cat owners or not.

“How can a veterinarian kill a cat, whether it’s owned, feral, unowned or abandoned – it doesn’t matter if she thought the cat was feral. This is astounding to me. Killing cats is against the law in Texas,” says Folger. “I am as shocked today as when I first heard about this. I couldn’t not believe a colleague could kill a cat in an inhumane, barbaric and cruel manner. It’s beyond my comprehension. “