Mahatma Gandhi said, “The greatness of a nation and its moral progress can be judged by the way its animals are treated.” Based on that standard, America clearly is not so great – not yet.

Dana Palmer is a firefighter from Grayslake, IL, and was on her third trip as a volunteer to the hurricane stricken Gulf Coast region when she walked into St. Bernard High School in New Orleans on September 30. “As a firefighter, I had thought I had seen it all – not quite.”

At least ten dead dogs were strewn throughout the second floor, most laying in pools of dried blood, bodies partially decomposed. There was also a dead parrot, a dead ferret and two dead cats in their carriers.

“We thought what could have happened here? Then it occurred to us, these animals were murdered,” she adds.

“They didn’t starve, there were dog treats, biscuits, and human food,” she pauses, undoubtedly trying to control her emotions, speaking by cell phone from New Orleans. “I tried my best to maintain my composure, to disassociate, and keep in my training mode. Then I saw her – the miniature white poodle just laying there. I mean her nails were painted. Someone loved this dog. Someone loved all these animals.” 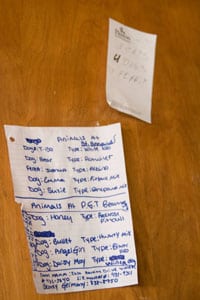 Palmer was volunteering for an organization based just outside Milwaukee, WI called Operation Bring Animals Home, as well as for Save-A-Pet in Grayslake, IL, where she had the week before delivered several displaced animals, Caryn Majeskie, founder of Bring Animals Home also witnessed the carnage at the high school. “I felt like I wasn’t looking out of my own eyes,” she says. “A dead puppy was the first thing I saw at the top of the stairwell, then dead dogs in the hallway. In classroom 206, dead dogs were tied up to desks and chairs, like they were tortured first. I just can’t comprehend.”

Palmer reported dogs with a Venetian blind cord wound around their necks.

A visit to nearby Beauregard Middle School wasn’t any better with a body count of at least 11 and maybe up to 20 dead dogs, and the evidence of deliberate killings even more obvious, as discovered by Mark Steinway, humane investigator for Pasado Rescue, He found ammunition consistent with the kind used by local police. Pasado Rescue and Pasado’s Safe Have, based in Sultan, WA, is working with the Louisiana State Attorney General’s Office to determine just what happened. 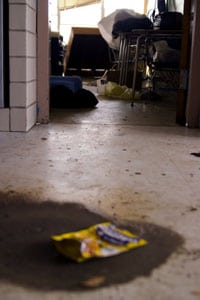 Steinway, who was in St. Bernard Parish to rescue living animals, says he spoke with several residents who had been evacuated to local schools. “Of course, most people brought their pets with,” says Steinway. “Others didn’t beat the (flood) water and were rescued from their roof tops and then delivered to the schools with whatever they could carry, and their animals, that’s all they had left in the world.”

These three schools weren’t immune to the flood water in the wake of Katrina, but the second floors were above the water line.

Still, with no running water and no power, it was clear these people couldn’t stay.  It’s unclear how long they camped out, that seemed to vary on the school; some stayed several days before officials ordered evacuations. They were told they would be moved to barges waiting off shore. However, they were also told they could not bring their pets – that the barges would not allow them to board with animals. “They were ordered by the police and didn’t have a choice,” Steinway says.

Eerie proof that something awful was about to happen was written on the walls and chalkboards of the schools. One typical note at the Beauregard Middle School read, “There’s a very nice dog in here. Please do not shoot her. Please find her a good home.”

Palmer says, “These aren’t normal messages to leave. Why would anyone think the dogs would be shot?”

St. Bernard Parish sheriff Jack Stephens doesn’t discount the possibility that his own officers could have been responsible. He must know his own officers were shooting stray dogs in the Parish; footage has been shown on TV and seen on the Internet.

Parish spokesman Steve Cannizaro told MSNBC that authorities are investigating whether the dogs were euthanized by owners or shot by military personnel, who may have killed the dogs if they became vicious when approached.

“Euthanized?” asks Steinway. “People left notes, pleading for someone to save their dogs; they left kibble and biscuits for them. That’s ridiculous.”

As for being vicious, Palmer noted some dogs were puppies, there were the kitties, the parrot, and then there was that one little poodle.

“I can’t imagine, or maybe I can,” Palmer adds. “People walking into these schools – whoever they were – being greeting with hopeful wagging tails, just happy to see human beings. And then they’re shot. At least one, it seemed, was shot in the mouth.”

Following her visit to the high school and the middle school, Palmer was surfing the internet, and happened to come across a plea to be reunited with a white miniature poodle, named Gigi last seen at St. Bernard High School. “This was an older woman who lived for her little Gigi,” Palmer says. “She begged me to email a photo of the dog, I didn’t want to, but I did.” 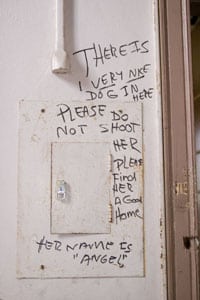 She says speaking with the owner and her daughter was the hardest thing she’s ever had to do. “They felt so guilty that they left their little defenseless dog to die like that.”

Palmer adds that she was told that the barges did turn out to allow animals all along.  “For this woman, all she had left was her little dog; and a feeling of overwhelming guilt. It’s heartbreaking, but absolutely this never should have happened. Someone must find out who did this.”

To that end, Pasado’s Safe Haven is offering a $25,000 reward for the conviction of whoever was responsible for killing these animals, and is giving financial assistance to further the criminal investigation. You can view pictures at www.pasadosafehaven.org and at Palmer’s site at http://www.flickr.com/photos/danakay/sets/1075641/  (Warning: While the most horrific photos are not shown on either website, some of the pictures are graphic enough to turn sensitive stomachs).