Jeans & Jewels in the big benefit, fun and informal but no less important for he Puppy Mill Project Chicago on Friday, May 11 at the Kimpton Hotel Allegro, Chicago (171 W. Randolph St). Admission HERE, $135.

Dogs sold at pet stores and places like flea markets, are nearly always from puppy mills. In addition, many websites which may look legit (or not) are also puppy millers. 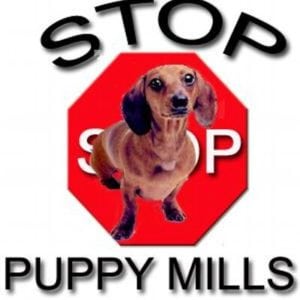 It’s ridiculously tragic that in a nation where about half of all dog owners share beds with their dogs that puppy mills – albeit illegal – are obviously at some level allowed to exist.

It’s an important reminder that this event is held just prior to Mother’s Day for a reason. While many puppy mill dogs dogs sold at pet stores and purchased online have various medical and/or behavioral issues because they were brought up in mills, other dogs seem to have suffered zero affects. However, their mothers – dogs you likely will never meet – do continue to suffer. They are literally breeding machines, kept in inhumane substandard conditions and receive zero veterinary care. When they can no longer breed or they become ill, most are euthanized (or killed in awful ways). 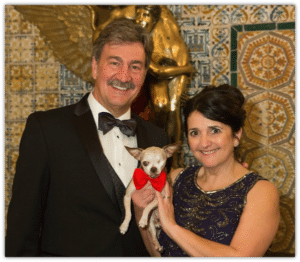 Dan and Rudi Taylor with Harley

The guests of honor at the 2018 Mothers in the Mills gala will be Dan & Rudi Taylor, co-Founders and Executive Directors of Harley’s Dream, a Colorado based non-profit working to end puppy mills through awareness, education and advocacy. Their adoption of the now world famous Harley inspired them to start Harley’s Dream.

On the brink of death, after spending 10 years living in a cramped, filthy cage in a puppy mill – where he’d lost an eye when his cage was power-washed, Harley was finally freed. He immediately received much-needed medical care and found love with a special family. And he thrived. To the surprise of the veterinary community, this strong-spirited little 6-pound Chihuahua continued going strong in spite of medical conditions which were the result of his years living in a cage. For five years following his rescue, Harley worked hard educating children and adults alike about puppy mills. Harley had personally participated in the freeing of more than 700 dogs from puppy mills across the Midwest, and raised the money that gave freedom to hundreds more.

The emcee will be Elliott Bambrough,  the three time, Emmy Award-winning host of Chicago’s Best, on WGN-TV. Elliott is an animal advocate, works with many local rescues.